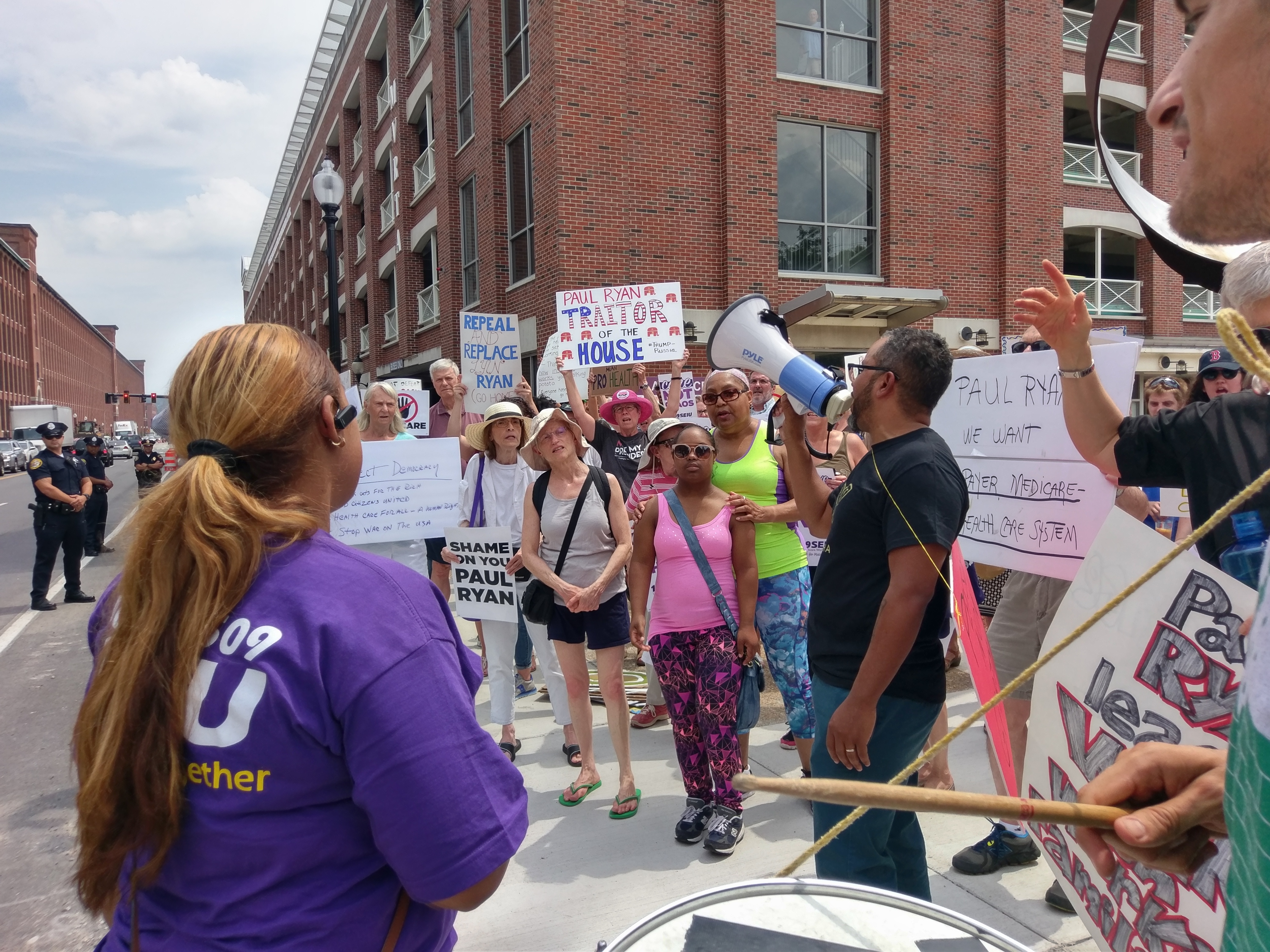 Protesters in front of the Lawrence Train Station, on the opposite corner of the New Balance Factory. All photos: Alejandro Ramirez.

Around 100 protesters gathered in front of the Lawrence, MA train station to protest U S. House Speaker Paul Ryan’s tour of the nearby New Balance factory. Many held signs supporting Obamacare and calling for immigrants rights.

“We are here to send the strong message that we are going to fight back against his assault on working families, we are going to stand up to protect our health care and the Affordable Care Act, we are not going to stand for the devastating cuts to healthcare and Medicaid that he has been pushing for,” said Nikko Mendoza, Communications director for 1199 SEIU, which helped organize the protest. “We are going to fight back against his budget and tax reform proposals that are going to hurt working families just to give massive tax cuts to the very wealthy among us.”

Speaker Ryan visited the the factory to promote his new tax reform plan which argues would lower tax rates for individuals and businesses, while also eliminating tax exemptions, deductions and credits. Critics argue the reform just means more tax breaks for the rich.

Ryan arrived shortly after Republicans failed their second attempt to replace the Affordable Care Act (Obamacare) and  many protesters focused on health care.

Second Essex and Middlesex Senator Barbara L’Italien, whose constituency includes Lawrence, said the tax plan would closely resemble “trickle down economics” and have negative consequences for the city.

“This will impact our federal budget, our state budget, all of the grants, all of the assistance we get for education, housing, social services, elderly care… are all gonna be impacted if this tax proposal goes through,” said Sen. L’Italien. “Trickle down will grow maybe the ranks of the one percent or will enrich the one percent, but it’s not gonna help the average person that I hear from every single day here in the Lawrence.”

“I actually feel offended that he’s in the community, in the city of Lawrence putting this policy forward,” said Rep. Moran. He also went after Republican immigration policies. “It’s important [Speaker Ryan] understands we are not in favor of the immigration policies that his party and the current president have put forward. It is very damaging, this country has always opened the door for all immigrants, not just from Latin America but all over the world.”

Senator Jamie Eldridge, who represents Middlesex and Worcester, also made an appearance.

“I think it’s particularly despicable for Speaker Ryan to come to Massachusetts to highlight a tax plan that would cut services and programs that I think… would be very negative for the whole state,” said Sen Eldridge. “When we talk about research dollars, when we talk about transportation, human services, state Medicaid, it would really be devastating.”

Lawrence Mayor Dan Rivera spoke briefly with Spare Change News before entering the factory to meet with the speaker. He commended protesters, saying “Civil disobedience is an important part of democracy. When people disagree, this is what you do.”

“I have not s the details of it, and I don’t like to talk about things I have not seen the details of, but there’s not much that me and Speaker Ryan will agree on,” said Mayor Rivera. “I’m gonna go in and listen and represent the workers that work in that building and who live in my community.

The crowd reached around 100 people at its highest point, and not all of them were from Lawrence. But the Lawrencians in the crowd had plenty to say.

“They [politicians] don’t care about human beings. They care about the… corporations,” said Martina Cruz, who has lived in Lawrence for 31 years. Cruz is speaking from experience–she herself is uninsured. She also has previous experience working in human services, and also knows what those services mean to the people of Lawrence. She also stressed how vital services are to those who suffer from addiction or mental health issues and to the local homeless population. “Every time they take away money from those services, they create more issues.

After his tour of the factory, Speaker Ryan spoke to the workers from a podium. He lauded New Balance for making its shoes in America, but claimed the company was “more the exception than the rule.”

“We have the worst business tax code in the industrialized world,” said Speaker Ryan. He also criticized U.S. business tax rates that range from 35 to 40 percent, compared to lower rates in other countries.

Ryan also promised to simplify the tax code and cut taxes, and said, holding up a small rectangle of paper, “Imagine filling out your taxes on a form the size of a postcard.”

The last major reform to tax policy happened in 1986, however the tax code has been updated and expanded over the last 30 years.

As the Associated Press notes, the White House and congressional Republicans have been negotiating a tax package for weeks, and have excluded Democrats from the talks.

According to DataUSA, Lawrence has a poverty rate of 24 percent, one of the highest in the state. Located 25 miles north of Boston, the old mill city has staunchly supported Democrats and is a majority Latino city.

Over 1.85 million Massachusetts residents are enrolled in MassHealth, the state’s Medicaid program, and would be at risk of losing coverage. Massachusetts Governor Charlie Baker has also proposed changes to MassHealth that would restrict access, particularly barring citizens who could receive insurance from their employer. Gov. Baker was not at the tour.

Next week the Senate plans to vote on a bill to repeal parts of Obamacare without any replacement. The Congressional Budget Office says the bill would leave 17 million people uninsured by 2018, and 32 million uninsured by 2026.