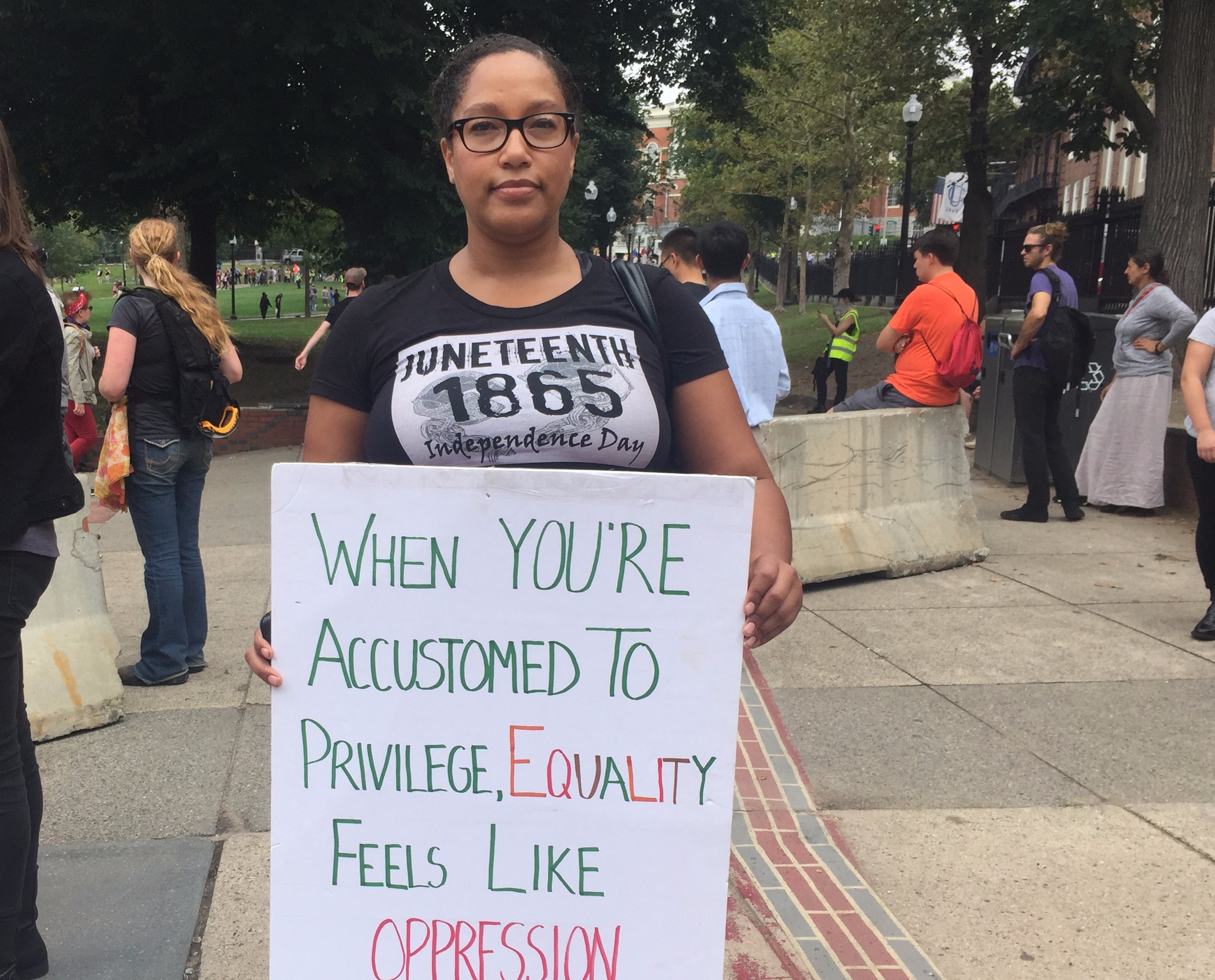 Counter-protesters came out in force and far outnumbered the “alt-right” faithful who descended upon Boston for what they called a “Free Speech Rally,” which others saw as a transparent cover for a hate speech rally.

One of the chants heard across the Boston Common was “make racists afraid again,” and based on how tough it was to find “alt-right” adherents at all – much less those willing to speak to a reporter – made it seem like the counter-protesters had accomplished exactly that.

Justin O’Donnell of New Hampshire said that he believes “both sides suck,” but made it clear that his sympathies were with the right-wing protesters.

“The other side seems to be the ones out here looking for violence. I’m not saying the alt-right isn’t coming out to incite violence, but I haven’t seen any of them here yet. I’ve seen young kids in their early twenties wearing masks…anticipating violence, in my opinion.”

Peter Berard, of the Democratic Socialists of America, said that after the carnage in Charlottesville last week, it’s especially important for people who don’t support white supremacy to come out and speak their minds.

“We think especially in the context of what happened in Charlottesville we need to unite the community against the alt-right, against fascism, white supremacy, the various other things that this ‘free speech rally’ supposedly represents, so we want to be out here to peacefully say that we want a better world we don’t want any of these fascists in our town.”

Ruth Fishman said she came out to support the people who members of the far right and white nationalist groups would like to see disappear.

One bold young man named Luke St. Ong wandered into the crowd wearing a “Make America Great Again Hat,” and said that he was there to support free speech.

“With the KKK, now I don’t support them in any way, but if you were to say you cannot become a nazi, you cannot say anything along the lines of anti-semitism, anything like that, i don’t think you should be able to limit speech. It’s either all or nothing.”

He went on to say that despite all evidence to the contrary, he doesn’t believe Donald Trump is a racist.

Regarding the violence in Charlottesville, he said that he did not believe that the use of large guns by the white nationalists’ security forces was enough to squash the free speech of the counter-protesters, although he did admit that it was an intimidation tactic.

“I don’t see how open carry is any form of speech. It is intimidation, and it is a form of self-protection,” St. Ong said. “It’s their right to open carry…nobody forced [the counter-protesters] to stop talking.”

While many people were talking and chanting about kicking the Nazis out of Boston, there were at least two men from Boston who came out to support the right-wing rally. Josh Bows of Boston said he feels like his free speech is being infringed upon even in everyday situations.

“The other day I was somewhere, i’m not gonna tell you where, and I was having a private conversation with a woman about Donald Trump, about his speech on Tuesday – we loved that speech by the way – this girl turns around and she says ‘oh you like Trump?’ And I says yeah, and she says, ‘oh! He’s a nazi, you’re a nazi, you white supremacist bitch!”

“This is the kind of shit that I’m fed up with,” he added.

Bows and his friend Guy Martel said immigration was one of the major issues they agreed with Trump on.

When asked what they thought about the fact that many legal immigrants had been swept up in ICE raids, Martel chimed in dismissively: “Sometimes people suffer for other people. That always happens.”

A man wearing sunglasses and a bandana over his face who chose to identify himself only as “T,” noting that he works in the corporate world, overheard the conversation with Martel and Bows, and said that as a refugee, he believes their blame is misplaced. T said that he came to the United States from Liberia at 7-years-old, and has thrived.

“I heard him saying we’re gonna ruin your kids future. I’m like really? I came and my family got asylum in Boston, we came we didn’t know noone and the city accepted us. I went to school here, I went to college here, I’m a software engineer now. You know, I got this opportunity and I just got my citizenship last summer.”

T said that he believes the lack of funding for the American education system has made American kids less competitive in math and science, and many Americans turn to immigrants as a convenient scapegoat: “They’re fundamentally against education. It’s just ignorance.”