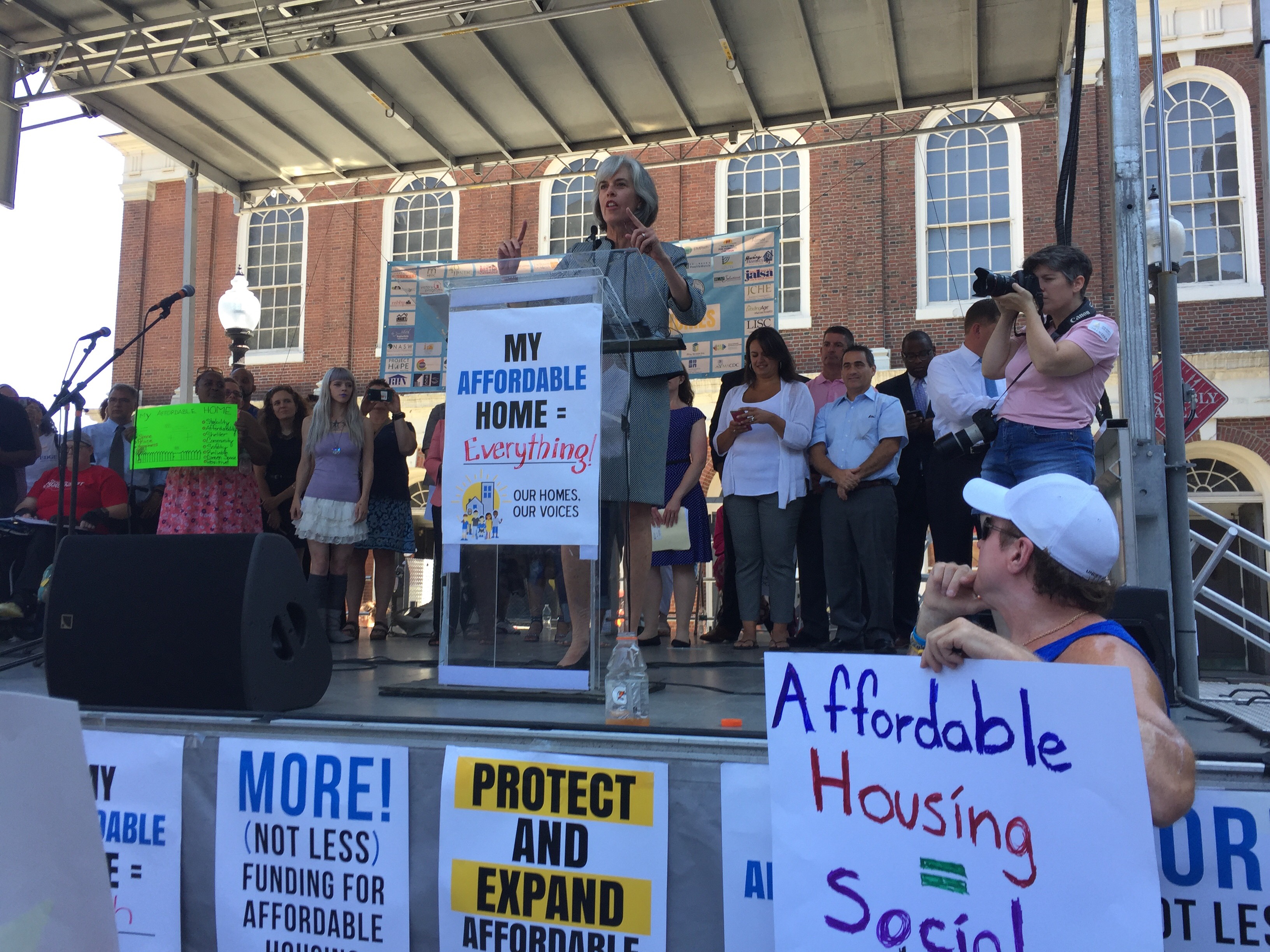 Hundreds of residents from across Massachusetts gathered in front of Faneuil Hall on Monday, July 31 to take a stand against President Trump’s proposed cuts to the Department of Housing and Urban Development (HUD) and to make a plea to Congress to increase funding for affordable homes.

The Trump Administration is looking to cut the federal government’s participation in the Community Development Block Grant Program, the Choice Neighborhoods Initiative and other programs through HUD and the agency’s overall budget saying, “state and local governments are better-positioned to serve their communities’ in need,” according to a press release on HUD’s website.

Many at the rally took the stage to describe their housing situation and how HUD funding makes a difference when it comes to access to affordable homes.

“Without a subsidy I would be living in a shelter because I can’t afford to keep up with these rising rent costs,” said Homes for Families Director of Leadership Development Nilaya Montalvo, a single mother. “They say it takes a village, well we’re here and we are a village.”

Those at the “Our Home, Our Voices” rally, organized by Citizens’ Housing and Planning Association (CHAPA), held signs saying “Homes are rights not a privilege” and “Affordable Housing = Social Justice.” Many participated in chants of “We will fight to make this right” and “Raise your voices, housing choices.”

“We’re here today to call on Congress to invest more in our affordable homes in our community,” Heller said. “Keeping things level is not enough, more is needed.”

Michelle White, a single mother who is homeless, shared her story of why more needs to be done to support affordable housing in the city of Boston.

White talked about the difficulty of living in a shelter since her son suffers from chronic lung disease, seizures and other medical conditions that require him to be hooked up to machinery and tubes while in the shelter.

“I have been a friend, a neighbor, a coworker and now I’m a resident with no place to reside,” White said. “It would be beyond irresponsible for Congress to cut funding for housing; to neglect the housing needs of families and individuals across the country would be unAmerican.”

Boston Mayor Marty Walsh said budget cuts at the federal level could impact the progress that is being made locally.

Walsh also spoke to the importance of HUD programs, calling their continued funding “investments for the future.”

“They bring neighborhood stability and the economic strength and we need Congress to understand that,” Walsh said.

Representative Katherine Clark encouraged the crowd to take action against the proposed budget cuts. “Your fight, your advocacy, your voice levels the playing field,” she said.

“Thousands rely on emergency shelters, too many spend almost all of their income on housing and it doesn’t leave anything over,” Clark said. “Our economy only works when everyone has a chance to participate in it, and this administration poses a threat to our economic future.”

Heller closed the rally with a call to action, asking participants to send postcards to Congress and led the crowd in a chant of “Housing is a human right.”

Since 2015, over 1200 units have been build in Boston for low-income residents, according to the city’s latest housing report, yet stabilizing rents remains a concern and goal.

The Business of Fancy Dancing by Sherman Alexie: A Movie Review