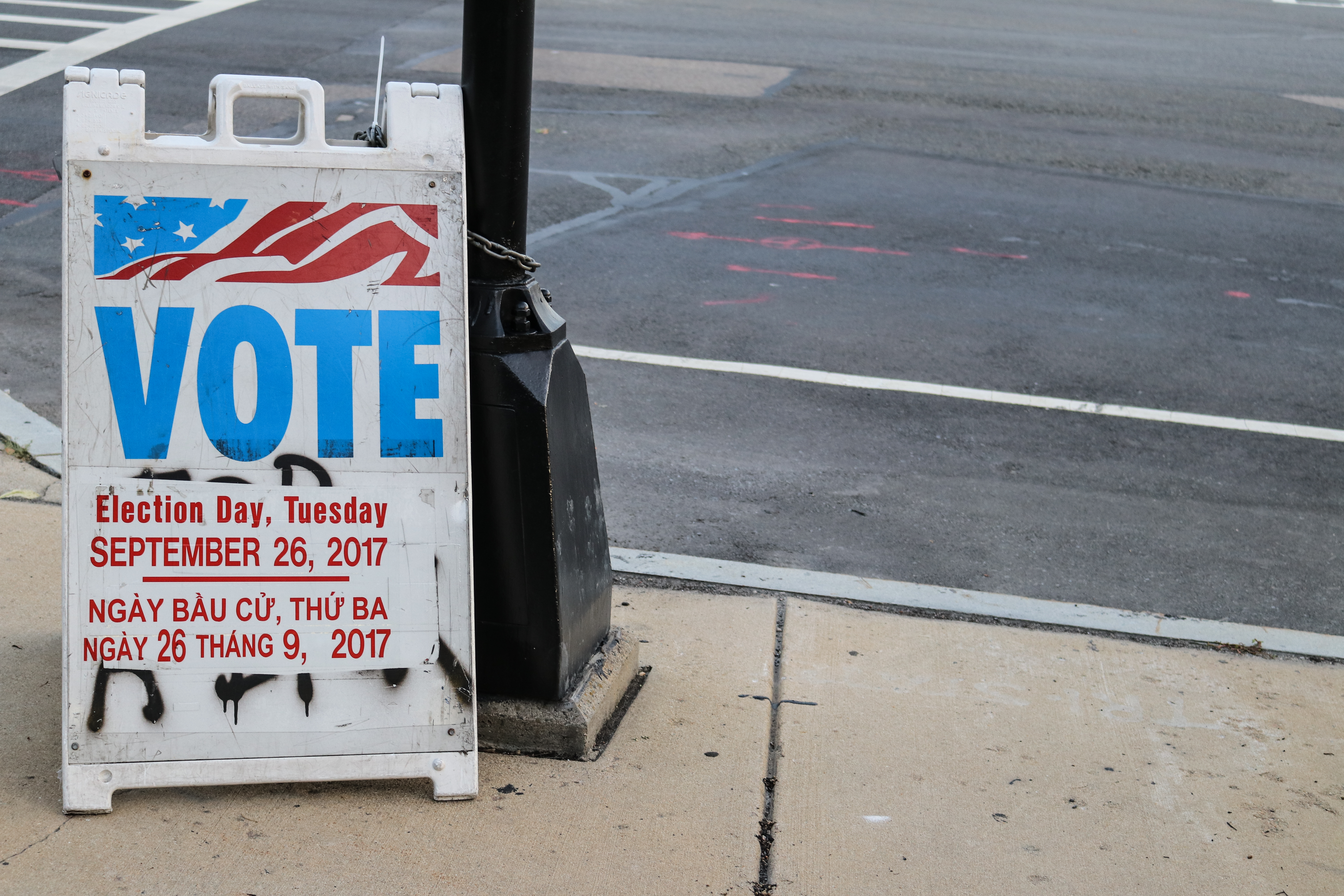 At the Allston-Brighton District 9 Candidates Forum on Sept. 14, the dominating theme was affordable housing. Moderated by DigBoston Editor Chris Faraone, Councilor Mark Ciommo, Brandon Bowser and Alex Golonka faced off in a town hall meeting. While Ciommo’s positioning himself as the experienced candidate, Bowser’s running as a community-oriented educator and arts advocate and Golonka’s campaigning as the “progressive choice.”

With the Sept. 26 preliminary election soon approaching, the candidates answered questions submitted by community members before the event, in addition to answering open floor questions.

In an interview before the forum, Bowser, who taught at Jackson/Mann K-8 School and Thomas A. Edison K-8 School, characterized Allston-Brighton as a “dynamic” neighborhood with a vibrant arts and food scene. He believes that affordable housing is needed to sustain the communities that shape Allston-Brighton’s character. Golonka, who works as a software tester, said in an interview that solutions like workforce housing can help increase affordable housing in Allston-Brighton. He added that the entire city of Boston is being gentrified, but Allston-Brighton’s proximity to downtown Boston and Massachusetts Turnpike make it a particularly attractive target for developers. Ciommo was not reachable for an interview. At the forum, when asked about their support for affordable housing and willingness to work with community organizations like the Allston Brighton Community Development Corporation, all candidates answered affirmatively. But the differences emerged as they responded to some more specific questions.

Allston-Brighton has been impacted by major luxury and market-rate developments in recent years, including The Residences at Boston Landing. These types of developments, which are materializing at an alarming rate, positioned Brighton as one of the neighborhoods prime for gentrification according to data from NeighborhoodX. Faraone asked the candidates about their approach to development: aggressive or conservative?

Ciommo said, “Now we’re a city in demand, a neighborhood in demand. We need to [help] keep that demand.” Bowser said that development needs to be considerate of the neighborhood. “Take a minute to look around and realize that we do have aging housing stock and we’ve already built tons of stuff. What it comes down to me is…making sure the development we build reflects the fabric of our community and making sure going forward that the development makes sense and reflects what we have as a community and neighborhood.”

Golonka said he’s concerned about the types of developments in Allston-Brighton. “I don’t think there’s anything necessarily wrong with development itself. What I do have a problem with is all the market rate, luxury development that is happening. I would get aggressive with that.”

The Inclusionary Development Policy requires developers to designate 13 percent of total units as affordable. When asked about increasing the percentage to above 13, Golonka said he would like to see a higher percentage. “It’s at 13 percent right now, let’s creep it up to 20, let’s creep it up to 25, let’s creep it up to as high as we can go.” Similarly, Bowser voiced support for a higher percentage, though he did not specify the ideal percentage. Ciommo said that 13 percent is a floor. However, he added, “although, when you do that [seek higher percentage for affordable housing], you’re asking for more density.” When asked about the Stop & Shop, described by a city employee as a “small town,” Ciommo said that the 1,000 units of rental housing that accompany the supermarket may seem a lot on the surface, but “it is transit-oriented development,” that is, developments located near public transportation.

Higher prices do not imply higher quality for housing in Allston-Brighton. With a large student population, enterprising landlords oftentimes fail to keep apartments up-to-code. Consequences include overcrowding, fires and unsanitary conditions. All candidates seemed to agree that unsafe living conditions is an issue and units should be inspected. Golonka cited City Realty as one of the most corrupt agencies operating in the neighborhood.

“Places like City Realty…are well-known for moving long-time residents, buying up buildings, raising rent. We need to beef up the enforcement and reporting infrastructure,” Golonka said.

The universities that draw the students to Allston-Brighton play a significant role in shaping neighborhood outcomes. Candidates were asked how tax-exempt universities can contribute to Allston-Brighton through PILOT payments. Ciommo said that a City Council taskforce formed under Mayor Menino spurred the increase of Payment in Lieu of Taxes (PILOT) payments to 50 percent since 2011. Bowser said that the PILOT payments from universities like Harvard University should fund arts projects and Golonka pointed that universities with campuses in Allston-Brighton (Boston University, Boston College and Harvard University) are “institutions that equal multibillion dollars and they are not paying their fair share in the city.”

Allston-Brighton is not only home to renters. There’s a community of homeowners.

“We need to mandate at least 25 percent homeownership rate in all BPDA housing projects. We also need to ban the use of Airbnb for non-owner-occupied units. We can’t just be turning our existing housing stock into hotels,” Golonka said.

Ciommo said he sponsored the legislation to increase the residential exemption by almost $500 per household.

Owner or renter, Allston-Brighton residents are fighting against displacement. Bowser and Golonka pointed to the Jim Brooks Stabilization Act to protect tenants against unjust evictions and educate them on their rights.

While all candidates for political office sell a vision during campaign season (or regurgitate old anecdotes), that vision can oftentimes be clouded by special interests. An open floor question tested Allston-Brighton City Council candidates’ financial backing. According to data from Massachusetts Office of Campaign and Political Finance, Ciommo frequently accepts campaign contributions from developers and real estate companies, including The Davis Companies, McDevitt Realtors, Marcus Isenberg Real Estate, Legend Group, City Realty, Charlesgate Realty and Braintree Street Realty. However, he said that they don’t make a difference in his actions. In contrast, Bowser said that he would turn down funding from developers and his campaign finance record does not include developer contributions. Golonka also said he would not accept funding from developers.

Christine Varriale, an editor and arts organizer who lives in Allston, listed an array of housing issues she cares about: affordable housing, safe housing, landlord accountability and housing availability for the elderly. Varriale said that Ciommo hasn’t adequately addressed Allston-Brighton’s housing needs. “I feel like he’s kind of in line with what the mayor’s thoughts are, which is kind of ‘develop whatever.’ But he doesn’t seem to be aware of the fact that these developers aren’t developing housing for the people of Allston and Brighton. They’re developing housing for profit and for people outside the city to come in. It’s just too expensive.”

Varriale said she’s supporting Bowser because “he hits all the marks on affordable housing” and also strongly advocates for the arts community in Allston-Brighton. “Keeping Allston-Brighton…an arts-centric neighborhood is important to me as somebody who’s involved in the arts and music scene. I think that supporting artists, creating affordable housing for them to live here will inherently sort of make Allston a more fun and vibrant place to live.”

Annie Carlson, a software developer and Allston resident, moved to the neighborhood a year and a half ago. Like Varriale, Carlson said she’s dissatisfied with Ciommo’s track record. She said she worries about not being able to afford the rent increases and feels the most confident about Golonka’s plans to address housing affordability. “I’ve talked external to this forum with all the candidates and he [Golonka] is the person who seemed most in line with me with the issues I care about. I don’t know to what degree he has full solutions to them but I don’t feel like Ciommo’s even really trying to address those.”

Other residents felt that the forum skirted around crucial housing issues, with the candidates not elaborating on how they will follow through on their plans. Florella Orowan, a small business owner and Brighton resident, said she was frustrated by the homeownership discussion. “In terms of homeownership…who can afford to buy a house here? I mean, I have friends who used to own houses here. They sold their houses for millions of dollars years ago.”

She said the definition of affordable has shifted so much that it now sits on a level out of reach for the working class. “What do you call affordable? The numbers they typically throw around are still a lot higher than what working people can pay. You have a large homeless population as a result,” Orowan said. “We have to talk about what percentage of residents are going to be homeowners, working people, we have to have stability. We need to reward long-term tenants. We have to get back to what a community is.”