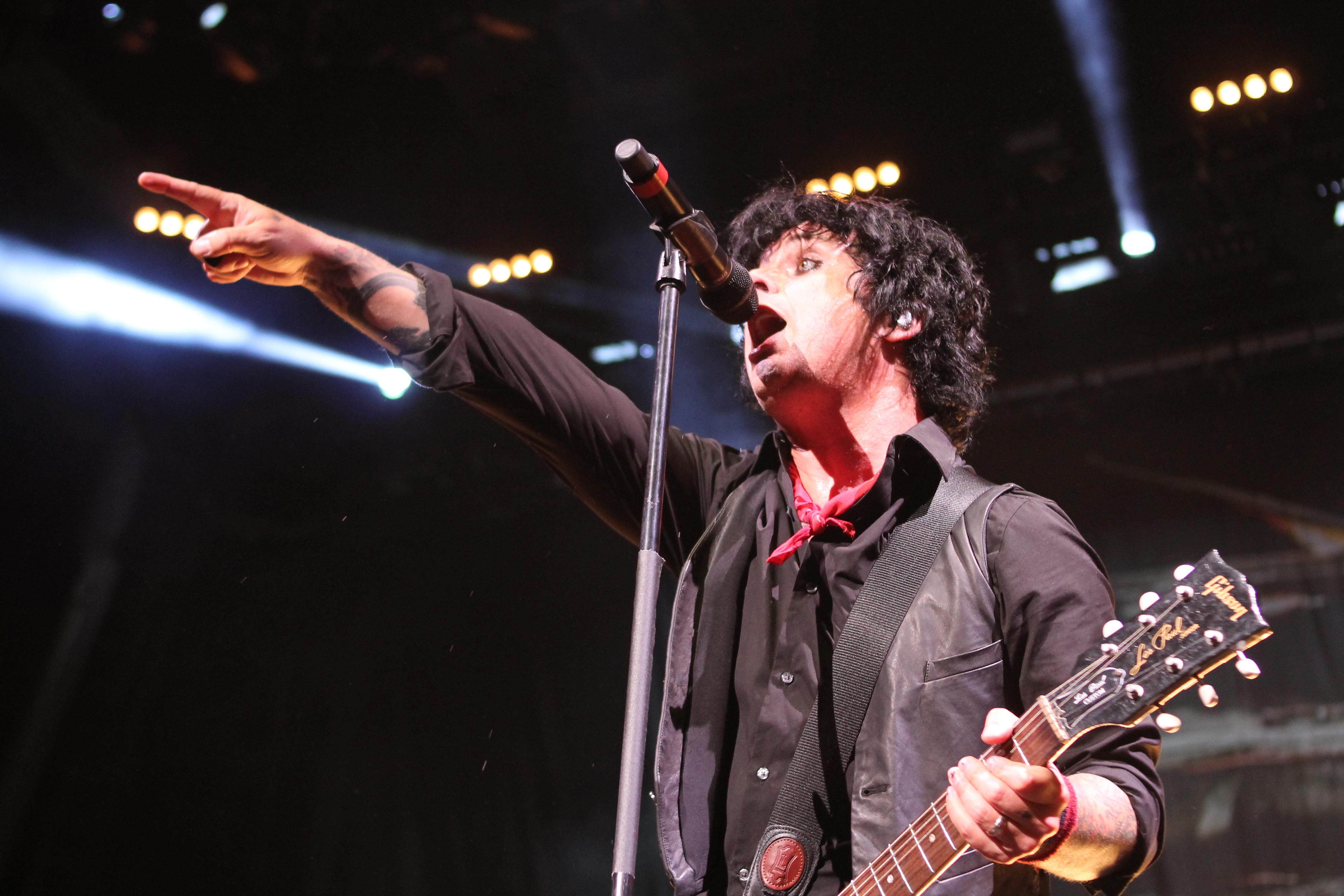 All Photos by Jason Greenough

Green Day always seems to have the perfect timing when it comes to their politically charged music.

The band of Oakland natives brought the summer leg of their Revolution Radio tour to Xfinity Center in Mansfield on Monday night, and with it, they brought a feverish angst that showed their frustration with the current political landscape.

But their overall message for the evening went beyond the anticipated Trump-bashing.

“This is not a night for political parties,” shouted front man Billie Joe Armstrong, after burning through the first four songs of the set list—“Know Your Enemy,” “Bang Bang,” “Revolution Radio” and “American Idiot”-era classic “Holiday”—with machine-gun speed. “This is a night for love and compassion and truth.”

The band dove into “Letterbomb” and “Boulevard of Broken Dreams” before turning back the clock to the band’s breakthrough album, “Dookie,” with bassist Mike Dirnt rumbling the droning, sinister bassline of “Longview” that had the generation-spanning crowd singing along to every word. Insanity ensued when Armstrong brought a young kid onstage to sing the song’s final verse before sending him back into the crowd via stage dive.

Armstrong barely stopped moving all night, seemingly kept afloat by Dirnt and drummer Tre Cool’s own balanced youthful energy. The sweat-soaked Armstrong soldiered on with “Youngblood,” “2,000 Light Years Away” (a real blast from the past) and “Hitchin’ a Ride,” followed by “When I Come Around” and “Welcome to Paradise,” before letting “Are We The Waiting” bring the crowd back down to earth, only to bring the entire venue to the brink of chaos immediately afterwards with “St. Jimmy.”

For a band that re-invented itself with serious subject matter such as suicide and depression, they sure know how to keep it light and have fun with the crowd. Like calling up saxophonist Jason Freese to help bring a cover of Operation Ivy’s “Knowledge” to life, setting the tone for a costume party-inciting “King For a Day” following “Basket Case” and “She.”

At one point, the heat seemed to get the best of Armstrong. He lay down on the stage while shouting a medley comprised of Monty Python’s “Always Look on the Bright Side of Life,” the Rolling Stones’ “(I Can’t Get No) Satisfaction” and the Beatles’ “Hey Jude.”

After taking a moment to address the crowd with yet another heartfelt message of love and intolerance of hate, an invigorating performance of “Still Breathing,” a song of redemption and perseverance, bleeding into “Forever Now”—both songs from “Revolution Radio”—closed out the first set, leading to an encore performance of “American Idiot” and eight-minute epic “Jesus of Suburbia,” before the lights dimmed and the band retreated and left Armstrong center stage, stripped down to a basic acoustic guitar for a heartfelt rendition of “21 Guns.” Finally, they turned on the confetti cannons to end the night with arguably their biggest hit, “Good Riddance (Time of Your Life),” at which time Cool and Dirnt reconvened with Armstrong to thank the crowd.

Green Day brought a rock and roll revolution to Mansfield, showing growth not only as musicians but also as people. They balanced the apathy that fueled much of their early work with the streak of hope found in their newest songs. But they also showed no signs of slowing down: they played a two-and-a-half hour set of high-velocity hard punk, aside from the occasional melodic tone replacing Armstrong’s scream (as showcased in “She”).

Green Day is still a powerful presence that should not be taken for granted.