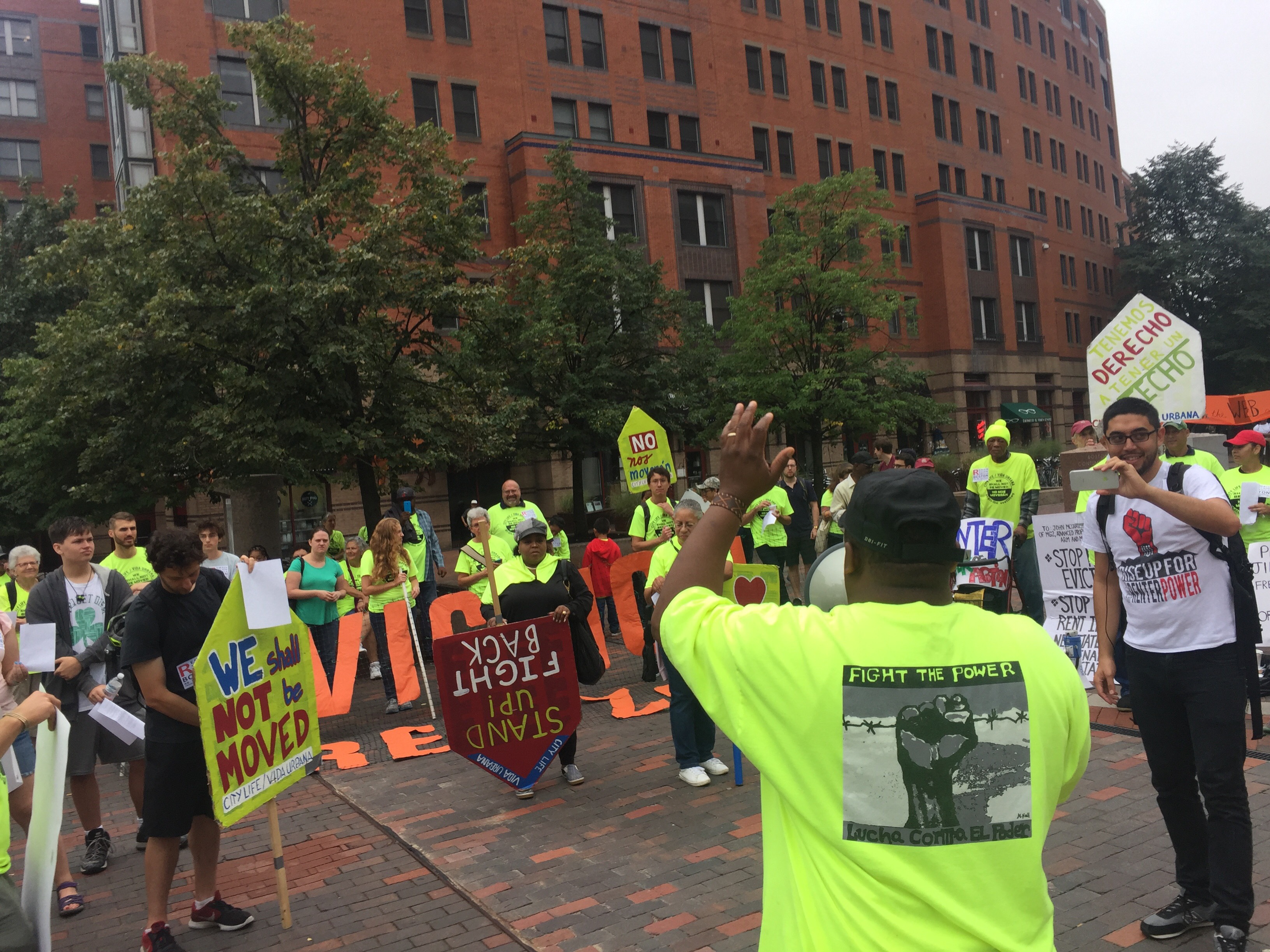 About 100 residents from the Boston area organized outside of Back Bay Station on Dartmouth Street on Saturday, September 16 to kickoff Renters’ Week of Action, which is being held in 45 cities nationwide.

City Life/Vida Urbana organizers led chants against Advanced Property Management and urged the public to sign a petition demanding that the company’s owners stop no-fault evictions and huge rent increases and negotiate with the tenant associations in their buildings.

Rally-goers held up signs saying “Stand Up! Fight Back,” “Stop Corporate Greed!” and “We Shall Not Be Moved” in both English and Spanish.

Also present were members of the Fenway Community Develop Corporation and the Chinese Progressive Association who wanted to show solidarity.

“This is pretty much a threat to all communities in the city of Boston and surrounding areas,” said Fenway CDC member Conrad B. “If you look at what’s happening you will see what the mass development of ultra-luxury housing is doing, not just for the low-income but the middle class who can’t afford to live in these luxury condos, which cost $2-$3 million to own.

“So we’re not just talking about poor people here, we’re talking about doctors, educators, and service industry people, Hotel maintenance, construction workers and government employees that are all ultimately being forced out and it’s not good to the community. These people need proximity to their workplace, especially for healthcare and emergency and safety employees who need to be close to their place of employment.”

Mark Liu, a staff member of the Chinese Progressive Association, said high rents and displacement are also affecting those in Chinatown.

“We’re in a housing crisis in Boston and across the country. I mean, people are being pushed out of their homes,” Liu said. “They’re pushing out members of the community that spent decades living here. They’ve built up the community, but they can’t live there anymore.

“So we’re facing this in Chinatown, where people are buying homes at double or triple the assessed price and turning them into Airbnbs and displacing people. That is why it’s important to be together with other communities who are fighting for this.”

Canute Harris of River Street in Hyde Park, who has lived in a building owned by Advanced Property Management for a total of 15 years, also joined the rally.

Harris says the rent is just too high, especially for someone like him who lives on a fixed income.

“Every few months there’s a notice of a rent increase,” Harris said. “Two months ago they wanted to go up $450 more per month in rent.”

Harris says he can’t negotiate at all with anyone from APM, while those around him chanted, “APM you can’t hide. We can see your greedy side!”

“They don’t talk to us. That’s why City Life does the talking for us. They don’t listen to us,” Harris said.

Members of the rally then walked down Commonwealth Avenue to hand deliver the signed petition against rent increase and evictions to the home of John McGrail on Marlborough Street, owner at MG2 Group, a division group of APM.

MG2 was behind mass evictions of a whole building in East Boston, where all tenants were all given eviction notices on the same day, the Boston Globe and City Life/Vida Urbana reported in August.

A man signs the petition that ralliers hand-delivered to one of the owners of Advanced Property Management.