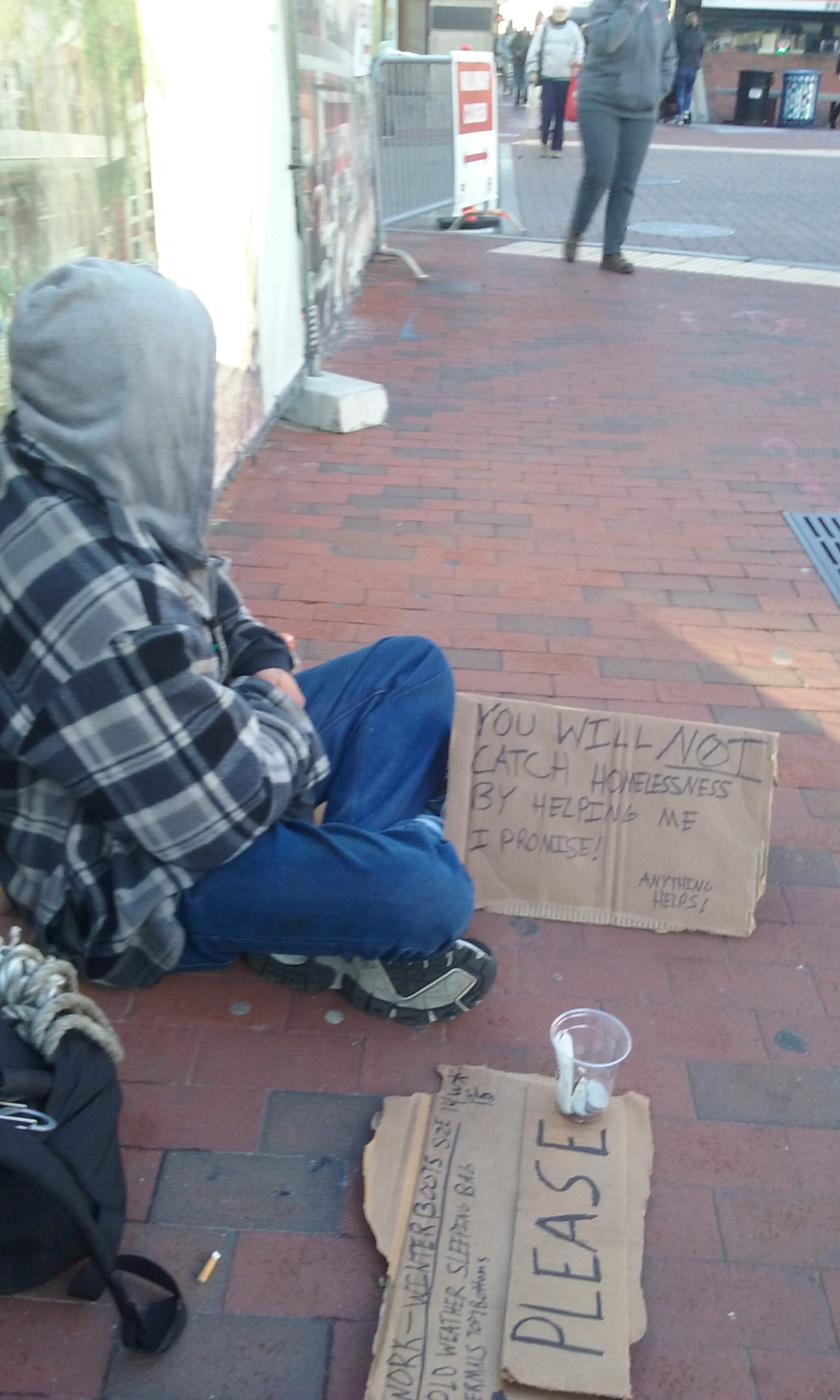 On face value, the photo accompanying this article is very funny. Unfortunately, many people are under the impression that homeless people are dangerous, mentally disabled, alcoholic or drug addicted. Yes, that can happen over time, but it doesn’t always happen at the onset of homelessness.

Let’s get this issue of homelessness straight. First, homelessness is not a disease. It’s an unfortunate series of negative events that happen to people who lack a proper safety net. So let it be known, you cannot “catch” homelessness like you catch a bad case of the flu. Homeless people are not carrying the Ebola virus. You will not burst into flames if you get close enough to donate a dollar or change. You also will not become homeless yourself by donating. You will not automatically become sick, mentally disabled or an alcoholic or a drug addict. And there’s a damn good chance that you’re not helping them furnish their condo on the Charles!

Basically, the homeless are just plain hungry, tired and thirsty. As a completely ignored population in our society, the homeless are pretty much roping individuals in a broken system with a broken spirit. If you’ve noticed, most of them sit quietly with their head down holding a sign and asking for help. This is not because they are mute, mentally ill or too high or drunk to speak. It’s because it’s demoralizing to the soul to constantly put oneself out there in full view of the world. We, as a society, don’t exactly welcome the homeless with open arms, generosity or words of encouragement. And you will not catch homelessness if you throw them a smile every once in awhile.

This is not a rant from a socially responsible adult. Oh, hell yes it is! Please, everyone let’s take a cue from the humor here and check out own behavior with regard to the homeless and their plight. If you can’t afford to give (trust me, they are used to that), at the very least try not to ignore them. As each individual passes by unacknowledged, the homeless become more and more part of the pavement. To be honest, it might be more humane to just walk over them instead of by them. At least this way they will get some kind of social interaction.

To close a quick true story. A fifth grader from Cambridge named Liam explained to his teacher how he’d spent his summer vacation. He told her he’d decided to make sandwiches for the homeless with the help of its father. He explained that he delivered them himself. He didn’t just start there but also took the time to talk to them. He said, “For the most part, they were all very nice people.” For the record, as of now, he’s not sick or homeless because of his interaction with homeless people. The moral of the story is that we can all learn a lot about compassion and care from a 10-year-old boy.