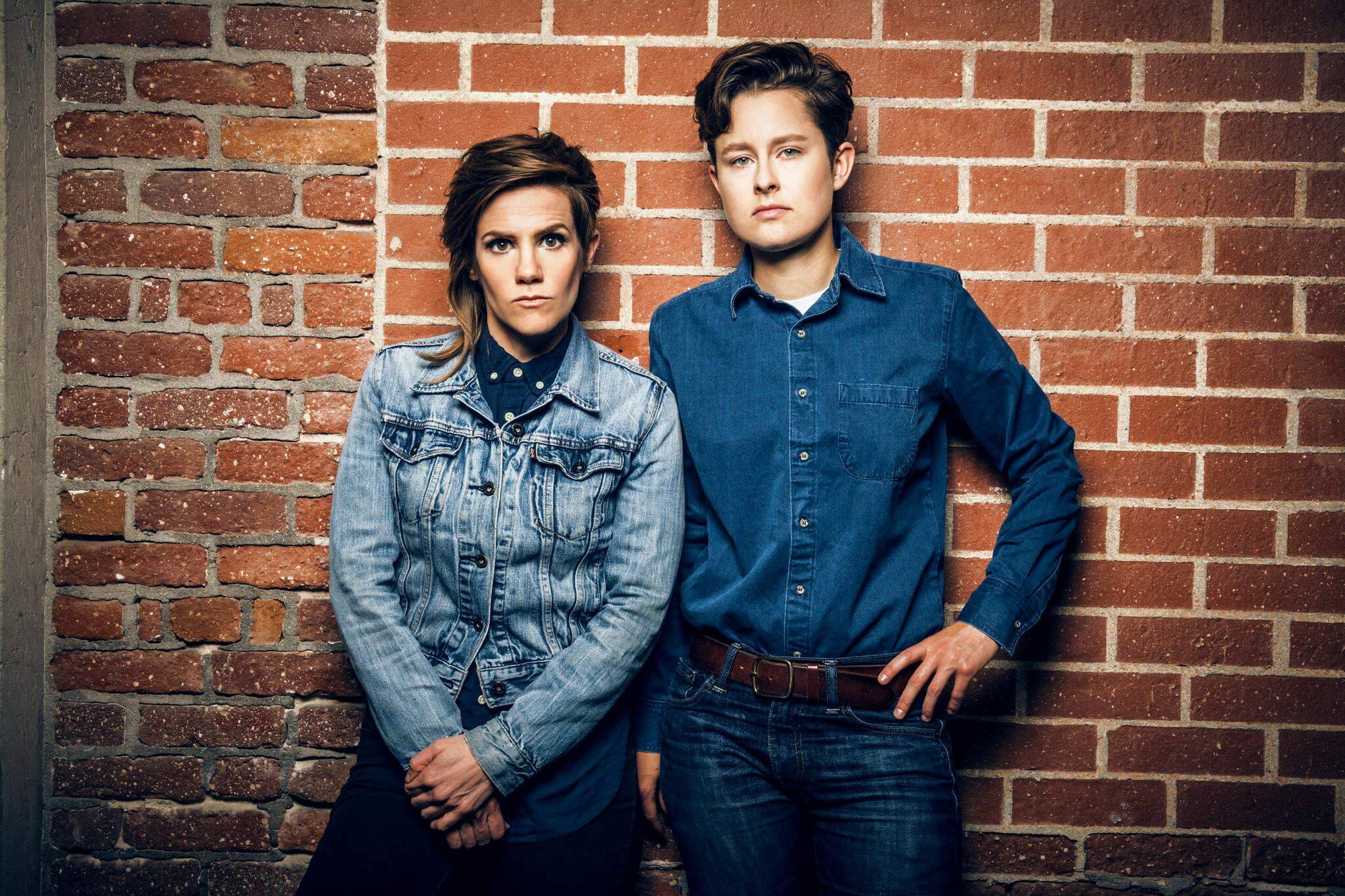 Cameron Esposito and Rhea Butcher have toured together for years, performing stand-up comedy all over the country. But this time around, for their “Back-to-Back” tour which hits the Wilbur Theater on November 4, things are feeling a bit different for the couple.

Whether it be the fact that it’s their first bus tour together, straying from their usual weekend flights or car rides to certain cities, then returning home, or the fact that they are playing bigger venues than they are used to, it’s fairly new territory. But Esposito, a Boston College alum, and Butcher, a native of Akron, Ohio, are excited about performing for larger and more devoted crowds.

“We have a legitimate fanbase coming out to the shows now, which is really cool,” said Esposito. “People have been so kind at our shows, and we have the kindest people in our audiences, and also with the political climate right now being so intense, I’m feeling very important to people right now, if that makes sense. Especially as someone who jokes around for a living, it’s pretty cool to be important to people, but also a bit of a surprise.”

Butcher says the couple had to adapt to a brand new touring lifestyle .

“It’s different to tour like [we are], because it’s moving so fast,” said Butcher. “We’re going to so many different places so quickly, and before, we would drive between places, so it’s weird to live life on the road, and it’s great to meet people, not just at the shows, but within the cities and areas and neighborhoods that we’re playing in that night.”

While they are trying to adapt to a new way of touring, the format of their shows remains stable. While at home in California, Butcher and Esposito host a weekly live comedy show and podcast, Put Your Hands Together, from the Upright Citizens Brigade theatre in Los Angeles. The format they use for those shows – dual hosting to start the show, then solo performances over the course of the evening – is how they have run the show on the tour, and while they don’t try to outshine each other, there is still some light-hearted competition.

“Because it’s a podcast, people that haven’t seen that show live have also been listening to it as well, so they’re prepared for it. We definitely are trying to one-up each other, though. That’s our whole thing!” Butcher said with a laugh, before Esposito chimed in.

“I was gonna say, maybe the crowds are prepared for that, but I’m not prepared for it. Rhea better get out of my way!”

Following the critical acclaim of their online series, “Take My Wife,” Esposito and Butcher found themselves in an odd situation. Seeso, the streaming service that carried the show for its first season and ordered a second, folded completely, leaving the comedy (and life) duo with a completely written, shot and edited season in their hands, which is still looking for a home.

“It’s odd because when a show is cancelled, it’s the show that goes away, not the network. The network never gets cancelled,” said Esposito. “So we assume that eventually, the second season will find a home at some point. I think that’s why it’s taken so long, because the industry isn’t even used to that happening.”

“Take My Wife,” which Vanity Fair called “urgently important,” gained significant support and recognition for its inclusiveness and LGBTQ-positive theme.

While Esposito believes  that while she and Butcher share a responsibility to speak out on behalf of the LGBT community, ultimately they don’t really do anything much different than any other comics. They’re just coming from a different point of view.

“In writing comedy, whether it be for television shows or stand-up, everybody uses their own lives and experiences, so part of why we talk and write about being queer is because we are, so it makes the most sense to write what you know,” said Esposito. “If you happen to be a cis-gendered, straight white dude, your lens is invisible, because it’s the assumed viewpoint. Part of it is that we are literally just doing exactly what everyone else is doing, but then there is another part of it, which is, in a time where the LGBT civil rights movement is happening, of course it’s a special instance to be able to fight for a community that wants the right to marry, and to use the bathroom.”

Esposito went on to say that as a writer she doesn’t live in a vacuum, she is influenced by the time in which she lives.

Butcher said she is unable to fully describe how she felt following the election of Donald Trump, but his election did help her gain a new perspective on how to describe those feelings after a period of self reflection.

Esposito has also reflected on how to approach these trying times as a comedian, but she has found herself in the same spot many of her comedy peers have found themselves in, where the issues and absurdity are no longer funny.

“The mood has shifted enormously, and I think that it’s important to figure out what your place is in this new time,” said Esposito. “To me, it’s not so much a light-hearted, joking-around time. This is a pretty heavy time.”

Butcher, with a nod to minorities in comedy, added, “I’m looking at comics that are part of communities that are currently being underserved or targeted by this administration. There are tons of comics who come from immigrant families, or are Muslim, or black or brown, this is also a moment to lift up the voices who are speaking, and joking, on behalf of those targeted communities.”

While they are a part of a community that has been bombarded with hatred, ignorance, and bigotry, Esposito is fully aware of the privilege that she and Butcher have within the LGBTQ community, given their stature as entertainers. That privilege only fuels Esposito to speak out louder for those who faced discrimination because of their sexual orientation.

“Just because we haven’t had those experiences recently doesn’t mean we can forget what is happening to our family, because that is what I consider the LGBT community to be. A family,” said Esposito. “Rhea and I both believe in extending awareness, and fighting for those in our community that are part of those more marginalized parts of the LGBT community. Transgender folks being targeted with bathroom laws or for their participation in the military, and especially the violence that is being seen by black trans women right now, what we’re trying to do, in our jobs, is to talk about it, create awareness, so that people in our community know that we stand with the people that are the most marginalized among us.”

Their work isn’t limited to what they do on-stage or on screen.

“We won’t walk through the door and close that door behind us,” said Esposito. “Once you get a leg up yourself, that means you pull everybody up with you.”