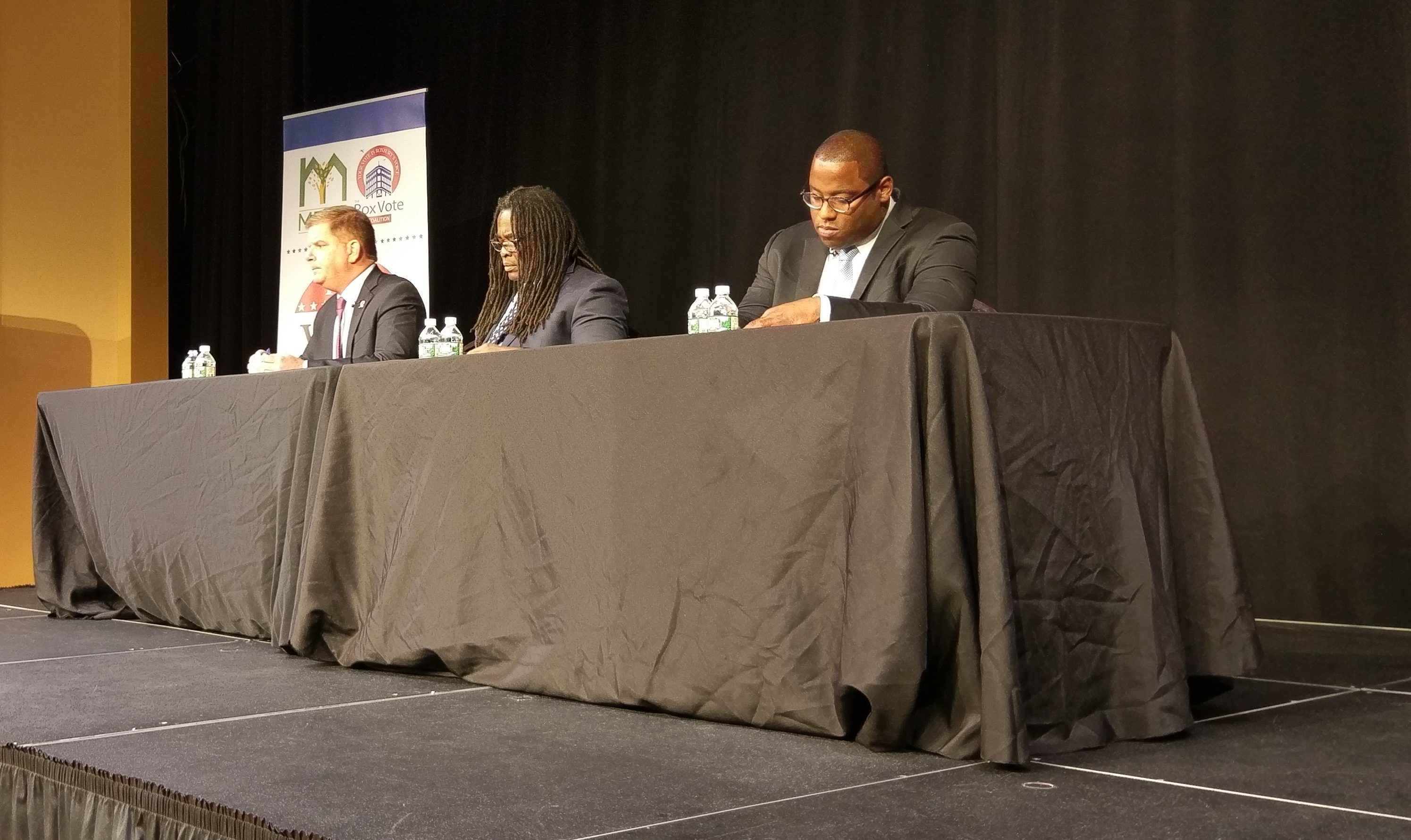 Mayor Marty Walsh and city councilor Tito Jackson, his challenger for the corner office, finally faced off in the first mayoral debate of the election. The overall topics were safety, economic development, education, and race and diversity.

The debate was held in Hibernian Hall in Dudley Square, and the Wednesday night crowd often cheered, booed, and shouted questions and comebacks for both men.

Moderator Adrian Walker, a Boston Globe columnist, opened the debate with the topic of gun violence in Boston. Jackson was quick to call out the Boston Police Department’s poor arrest rate of gunmen in non-fatal shootings: four percent. He also said he would follow Richmond, Ca. model of reducing gun violence, referring to the West Coast city’s strategy of focusing on a small group of at-risk people and offering counseling, work, and even a stipend. The program dropped the city’s murder rate from 47 people killed in 2007 down to 11 in 2014. He also called for more diversity in the BPD, noting 90 percent of new hires were white.

Walsh cited the reinstatement of the cadet program as a way to bridge gaps between police officers and the communities they serve, and diversify the BPD. The academy is 49 percent people of color, he said. He also stressed the need for more jobs and opportunities for young people.

Jackson also pushed for a permanent body camera program for BPD, saying it would benefit both citizens and officers. He also called for a civilian review board with “teeth,” one that could hold police accountable through subpoenas.

Walsh responded “It’s not just about a device on somebody’s shoulder. It’s about how we continue to build trust in our community.”

Bike safety followed the discussion, and Walsh referenced the city’s initiative to end bicyclist deaths on the road and the need to educate drivers about how to share the road. Jackson called for more investments in bike infrastructure through the parking meter fund.

Jackson also vowed to dismantle the Boston Planning and Development Agency, calling for a “people-focused” planning association. He also called for a disparity study to help businesses owners of color get more city contracts. Jackson said only two percent of contracts go to minority-owned businesses.

Walsh defended his record on economic growth, noting that 60,000 new jobs came to Boston during his administration. He also sad that Boston saw a citywide decrease in the unemployment rates, though admitted, Dorchester, Roxbury, and Mattapan still have higher than average unemployment rates. He also said the Boston Residents Jobs Policy helped diversify the workforce.

Walsh defended his administration’s efforts to help minorities win city contracts. He added that “the numbers” for contracts with minority owned businesses “were abysmal, they were less than a percent” when he came into office. In response, he signed an executive order that aimed to expand those opportunities.

On affordable housing, Jackson vowed create 1,000 affordable homes that people can actually own. He also said that developers using city-owned land would have to devote one third of the development to low-income units, one third to middle income, and the rest at market rate.

Walsh defended his housing record, saying “20 percent of our housing stock is low income housing. [It’s] highest percentage in the country for a city our size. We are working to making sure we are a city for everyone.”

Jackson, however, argued that 80 percent of the housing built in Boston today is for people who make $100,000.

The two disagreed on the deal that brought General Electric to Boston, and a potential bid for Amazon. Walsh said GE brought jobs and also paid $25 million the school system. He expects Amazon ill bring similar benefits. Jackson feels the money spent luring such companies is better spent on schools and local businesses.

Jackson hammered Walsh over the public schools budget, and said BPS is moving backwards. He disputes claims that Walsh has invested $150 million in schools, saying the mayor cut over $11 million from 49 schools this past year.

Walsh defended his investments in schools, calling them record investments, but acknowledged there is still room for improvement. He also said he hired more teachers of color, a claim Jackson disputed.

Walsh also highlighted the performance of BPS schools, calling many of them the highest rated in the Commonwealth.

“We have a 72.6 graduation rate at Boston high schools, that’s the highest it’s ever been,” said Walsh, adding Boston still needed to help the 27 percent that doesn’t graduate.

When Walker asked if Boston’s reputation as an “unwelcoming” or “downright racist” city was still true, the crowd shouted “yes!”

Walsh acknowledged that Boston had problems with race. He also noted that 44 percent of city hall hires were people of color and referred to his diverse cabinet. He also applauded the political gains of people of color in Boston. He added that the momentum needs to continue.

Jackson slyly replied that on Nov. 7, election day, “we have a great opportunity” to secure a prominent job for a person of color. Even Walsh laughed.

Jackson also went after the mayor’s handling of racism at Boston Latin School.

“There was a crisis, and he didn’t deal with that issue,” said Jackson.

Jackson also tied the issue to the school budgets, saying “It is unacceptable to build a MLK statue when you cut funding for the MLK school,” shot Jackson.

On BLS, Walsh said “I wish I had know sooner, I would have gotten involved.” The crowd booed the claim. He added that the headmaster didn’t respond to his emails.

Plenty of drama preceded this first debate. RoxVote Coalition originally planned to hold a candidates forum, while WBZ was set to host the first debate on Oct. 10. However, WBZ cancelled the debate after electric workers called a strike. Shortly after that, RoxVote stepped up to fill the void.

A couple hours before the debate, however, Jackson, in a Facebook Live video, said that the organizers told him that Walsh was trying to cut the debate short by 30 minutes. Most advertising said the event would go from 5:30 to 8. Spare Change News contacted RoxVote and the mayor’s campaign press secretary for clarity. RoxVote told Spare Change News the question portion was scheduled to end at 7:45. The Walsh campaign responded with a statement from Madison Park Development Corp, which runs RoxVote. The statement, written in a Facebook post, said the debate was scheduled from 6:30 to 7:30, and MPDC took  the blame for any mix-up about the schedule. “We, as the organizers of the event, neglected to leave appropriate time to conclude the debate and allow both candidates to gracefully exit Hibernian Hall at 7:40pm, resulting in a miscommunication on the end time of tonight’s debate,” said the post.

Jackson had also challenged the mayor to four debates, rather than just two, via an open letter. Walsh, in a response penned by his campaign manager, turned down the challenge.

There will be on more debate on Oct. 24, hosted by WGBH. Election day is Nov. 7.