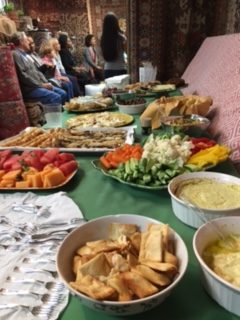 The Sufi Service Committee held their biggest event of the year on Friday, September 22, the annual Clothes and Food Drive. The celebration included featured speakers like Cambridge Mayor Denise Simmons and Executive Director of Somerville Homeless Coalition Mark Alston-Follansbee. Many other representatives from local organizations were also in attendance.

Mo Nooraee lives by two rules: always give your charity to people in need, and be sure to keep it local. Nooraee came from Iran to be a student, but he always wanted to own a store, and when he became successful he wanted to give back.

“He always wanted to own a rug shop. He actually worked so hard that he was able to buy this building and run the rug shop out of it, and his word is that he became very fortunate and he wanted to give back because he was such a lucky man, and so what he did about 3 years ago was start a charity,” said Lisa Camacho, a volunteer for the Sufi Service Committee that oversees the clothing operation. She has been volunteering for the organization for about one year.

Clothing is not the only help that they provide. Individuals in need of food count on the Sufi Service Committee each week to help them.

“Most mornings we deliver food donated from Au Bon Pain, Whole Foods, or Panera, and it all goes to some of the local food pantries and homeless shelters. Iggy’s bakes a special batch of bread for Rosie’s place, so we are kind of like the vehicle,” said Bill Bumpus, a volunteer that oversees the food donation operation of the Sufi Service Committee.

“The goal here is to get on more people’s radar,” said Jake Lensing-Sharp, the newest employee of the Sufi Service Committee. “I think maybe having a few more bigger events, because this is the largest event of the year. I think people would love to know more about it. It is always a struggle within the local community. I think the biggest greatest thing about this organization is that Mo is at the center of it, and he is probably the nicest, kindest guy.”

Most of the Sufi Service Committee is volunteer-based, and the responsibilities are on a rotating basis. About 8-10 people are involved in the clothing and food donation process on any given week. With only a few hands on deck, and a simple idea in mind, the Sufi Service Committee has been able to make a huge impact over the past few years. With more help and more great ideas to come, they hope to see an even greater impact on those in Boston affected by need.