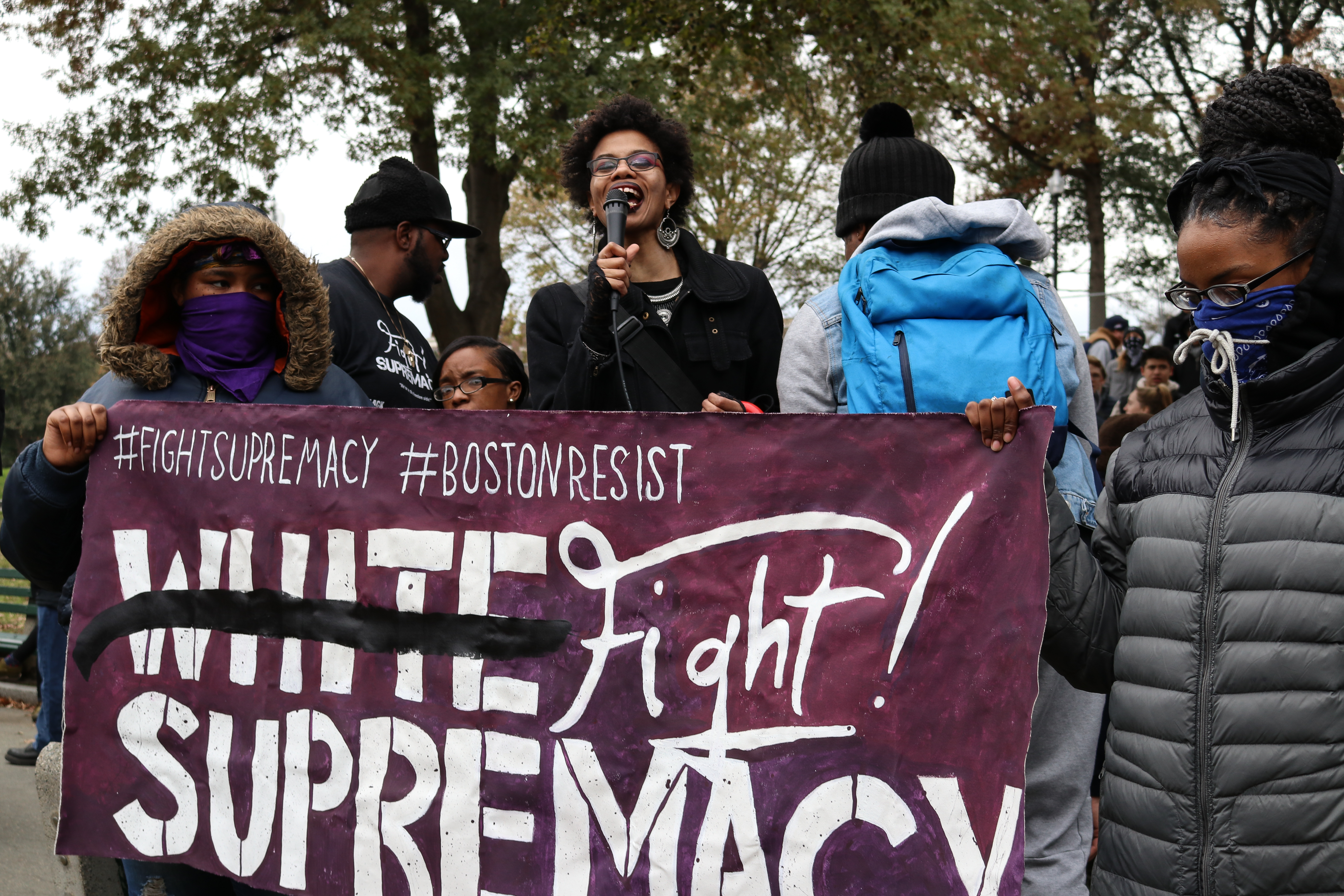 On Saturday, a group called Resist Marxism held their “Rally for the Republic” at the Parkman Bandstand in the Boston Common. Surrounded by police for the entire event, the group never received a permit. Resist Marxism’s Facebook description claims they “defend freedom of speech from local government suppression and violent mobs,” but the group has clear ties to white supremacists groups, including the organizers of a similar rally back in August.

Counter-protesters outnumbered Rally for the Republic attendees by about 10 to one, calling the event “Fight Supremacy 2.0.” Similar to the first Fight Supremacy protest, which was organized to protest the “free speech” rally in August, counter-protesters came prepared to send a strong message that white supremacists are not welcome.

Organized by John Medlar, a 23-year-old Fitchburg State University student, The Rally for the Republic headliners featured some of the most controversial figures of the alt-right, inlcuding Patriot Prayer leader Joey Gibson, far-right nationalist Kyle Chapman (known for beating a counter-protester with a stick), and Tammy Lee, from the hate group American Freedom Keepers.

During the Rally for the Republic, speakers claimed that they were not Nazis, a statement counter-protest organizers called bogus. “These Nazis who say everything that Nazis say and then say, ‘we are not Nazis’ are getting loud as hell over there,” said one of the organizers during the rally.

As the counter-protest crowd assembled, they broke out into chants of “No Trump, no KKK, no fascist USA.” Groups represented at the counter-protest included, but are not limited to, Democratic Socialists of America, Our Revolution, Socialist Alternative, and Solidarity Boston.

A total of three arrests were made during the rally, according to the Boston Police Department.

Sam Sherman, a Boston resident, said that he showed up to the rally and the first counter-protest in August because he thought it was the “democratic” thing to do.

“I tend to think of these sorts of rallies as a way for them [white supremacists] to gather more support and sort of demonstrate their presence,” Sherman said. “In these cases the democratic thing to do is to show opposition if you feel opposed to the position they are showing.”

Sherman said that Resist Marxism framing their rally as a free speech rally hides their true intentions. “To me it’s sort of like they’re saying they don’t think they could say what they stand for in a way that would be more acceptable to the general palate and they’re trying to acquire more people for their movement,” he said. “To me, it’s just like a thinly veiled attack to play the victim and try to spread their message that way, sneakily. ”

Megan Glynn, a Boston resident, said that while white supremacy permeates throughout the White House, Senate, and House, showing up in protest makes a significant impact.

“I came because we have to show these guys up every time they come here and wherever they go,” Glynn said. “We have to show up and show that they’re the minority and that we just don’t buy into their free speech for only white men.”