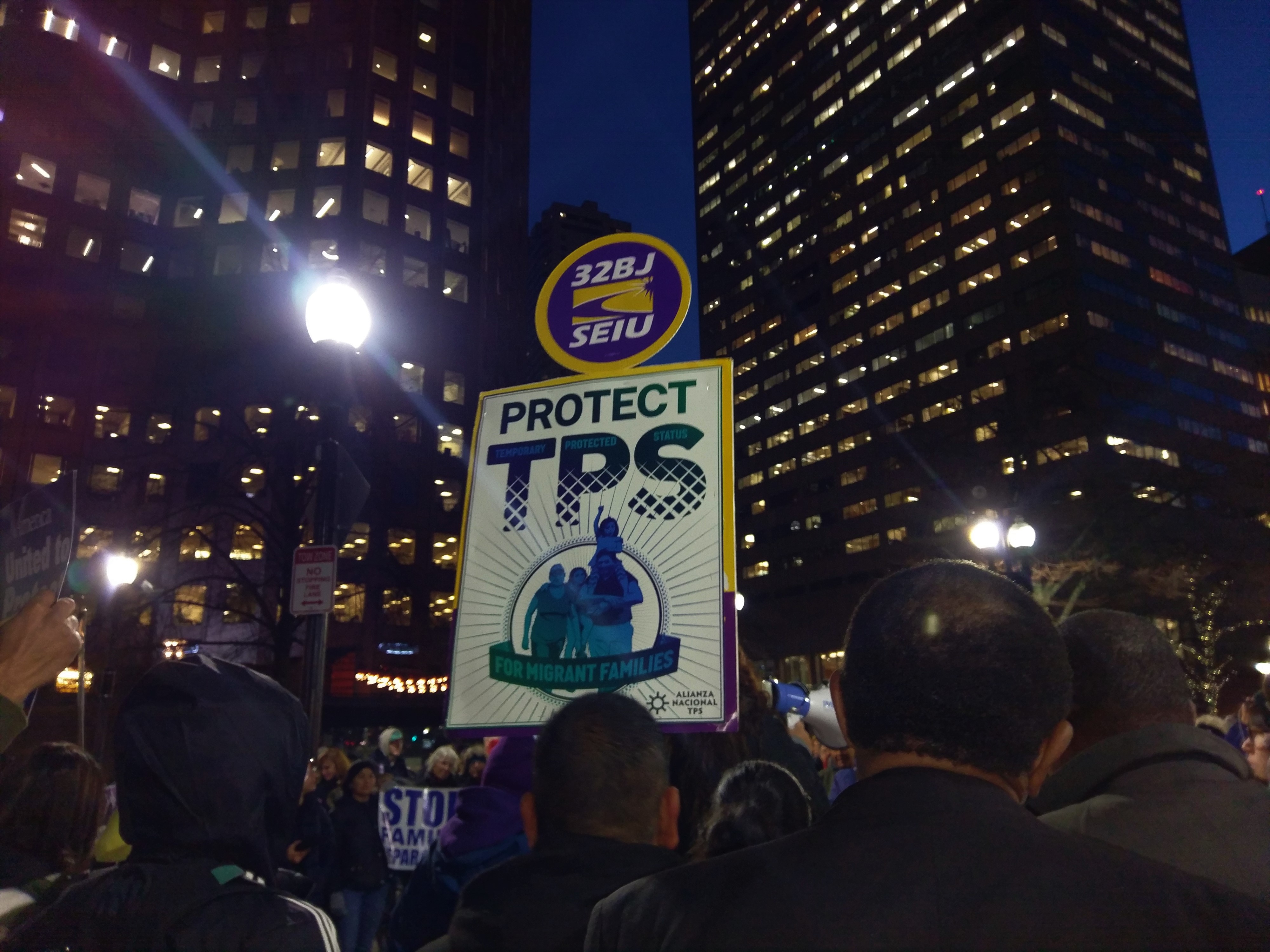 In Faneuil Hall on Wednesday night, about 200 hundred immigrants and their allies and advocates rallied in support of keeping Temporary Protected Status (TPS) for Haitians and other immigrant groups and preserving Deferred Action for Childhood Arrivals (DACA). In late November, President Donald Trump’s administration announced the upcoming end of TPS for Haitian, Nicaraguan, and Sudanese recipients, currently slated for July 22, 2019. About 59,000 Haitians have received TPS in the wake of the 2010 earthquake that killed 316,000 people.

“It’s not gonna help if we go back… to Haiti,” said Jean Aly to a crowd of supporters. He also alluded to the support the country receives in a over a billion dollars worth of remittances sent from Haitians in the U.S. “We are asking President Trump to renew TPS to help us rebuild our country.”

Aly, who works at Logan Airport, told Spare Change News he came to the U.S. in 2010 after the earthquake and received TPS. “TPS helped me to send money to help my family in Haiti… Haiti still needs to rebuild. The earthquake destroyed everything, it destroyed our economy.”

The rally was also arranged to show support for recipients of DACA, the program which allows young undocumented immigrants to receive permission to work and go to school. President Trump announced the repeal of DACA back in September, and the program is currently set to end in March.

Paola Sanchez, a 28 year old DACA recipient, spoke to the crowd and told them “We need a clean DREAM Act!” ⸺ referring to the long out-of-reach immigration reform measure.

“DACA had opened doors for me,” Sanchez, who came to the U.S. when she was 14 from Bolivia, told Spare Change News. “I was able to apply for a better job, to go to school, to have my driver’s license⸺things I wasn’t able to do before.”

Sanchez said DACA let her “come out of the shadows” and also qualify for in-state tuition at MassBay Community College. After DACA’s repeal, Sachez found herself speaking at more rallies and events. “I want to speak up, because I know many of my friends were so scared to talk about their rights.”

“There are legislative pieces that congress can act on and we want them to act now,” said Roxana Rivera, local vice president of SEIU 32BJ, which helped organize the rally. He words echo popular outcry for Congress to handle immigration reform. Many call for a “clean” DREAM Act⸺that is, uncompromised by border control or other acts⸺and protecting TPS. Even President Trump tweeted that Congress should “do [its] job” on DACA after announcing the repeal.

Rivera also noted that these issues were bringing younger and older immigrant advocates together, saying “it crosses age to age.”

“All these immigrants have found themselves here for different reasons and are now uniting and saying ‘this is our home,’” she said.

The rally was held in solidarity with a similar action happening in Washington, D.C. About 5, 000 Boston-area Haitians receive TPS.

Other organizers of the rally included SEIU 32BJ, The American Civil Liberties Union of Massachusetts, The American Muslim Center, and the Massachusetts Immigrant and Refugee Advocacy Coalition, among several others. The New England Jewish Labor Committee, , The Student Immigrant Movement (SIM), TPS Comité de MA Boston Mayor Marty Walsh also spoke at the event. The level of support was not lost on the speakers.