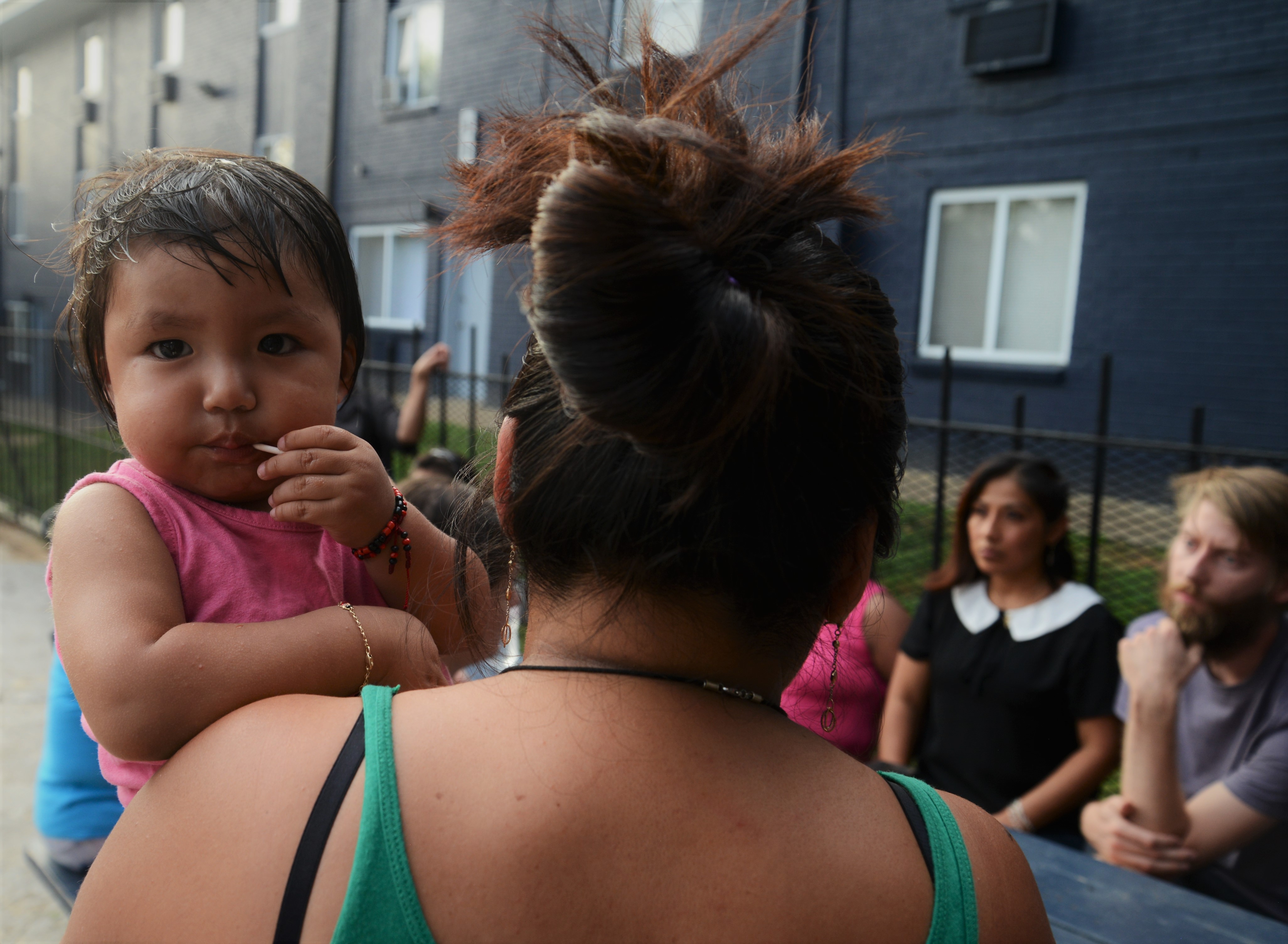 Los contratos de arrendamiento. “Apartment leases” in Spanish—it’s been the request of hundreds of renters living at the Union on Thompson apartment complex in South Nashville.

The language barrier has meant that the Spanish-speaking renters, many of whom only have access to English through their children, have had no knowledge of how to ask for repairs or what was legally guaranteed to them as tenants.

There have been overflowing bathtubs, broken exterior lights and even complaints of mold.

There has been another concern repeated over and over: security. Residents at Union, some of whom have lived there for 15 years, have watched their complex become a hotbed for holdups. To them, it’s especially troubling because their niños are often found climbing around on the playground or riding their bikes on the complex’s paved, hilly lots.

The tenant’s requests, and their efforts to unionize, brought me to their apartment complex while the sun was beating down on a strikingly hot day.

I had been there for less than 10 minutes, with my photographer Jay Sowers, when a woman came running over to me, screaming “Inglés! Inglés!” and tugging my arm as she hurried me around the complex. In less than a minute, I was standing before a woman who had been the victim of an armed robbery. She was visibly shaken, crying and standing by her children.

The incident had happened in the apartment’s laundry room, and I’d been led to her just a few minutes later. I spoke with a 911 dispatcher, and the police came soon after. My translator, Maria Sharkey, who arrived in the aftermath of the crime, helped file an incident report and then climbed into the ambulance with the victim to speak with paramedics on her behalf.

Thirty minutes later, the responders were gone, the victim had no major injuries and a dozen residents had gathered around me on a picnic table in the playground.

They murmured in agreement as renters told me, in Spanish, “You saw firsthand what happened. This is what we’ve been talking about. We need more security. We need security cameras. ​Si. Si. Si!”

Security topped the list of many of the residents’ concerns, all centering on the negligence of their English-speaking management group.

“The last year, there have been similar things like we just witnessed—armed robberies, negligence by maintenance and complaints about the lack of lighting. It’s super dark at night,” said Beatriz, a tenant whose last name I will not use to protect her identity. She and her family have lived at Union for 10 years. “The manager says they fix it, but so far, we see nothing.”

According to renters, multiple crimes involving guns have occurred on the complex in the last six months.

The property is managed by Elmington Property Management, a development firm headquartered in Nashville. Global Asset Alternatives, based in Atlanta, owns the complex after acquiring it last year.

Elmington did not return requests for comments.

Tenants explained to me how, over the last year, they had experienced longer wait times for repairs and less thorough upkeep.

Leases are not available in Spanish—and were not under previous ownership—and the maintenance call service is only available in English.

Tenants said that they pay from $710 to more than $800 a month for two-bedroom units. “We just want what we’re paying for. We’re always paying rent on time,” Beatriz said.

Earlier this summer, a former Union tenant reached out to Homes For All Nashville, an organization that seeks to empower working-class renters through education and building unions.

“[Tenants] are paying full rent and for that, people should be getting maintenance requests met in a prompt matter, and they need to be communicated with,” said Austin Sauerbrei, of Homes For All Nashville. “There’s a number of things that, as a major management firm, they should be doing automatically. Tenants shouldn’t have to come and say, ‘We want our leases in Spanish.’”

Homes For All began communicating with Beatriz and other tenants, connecting the tenants at Union with other tenants in Nashville facing similar situations. Homes for All also arranged for an attorney from Legal Aid to educate Union tenants on their renters’ rights under state law.

Under the direction of the attorney, tenants are now keeping paper trails of maintenance requests in the hope of putting more pressure on the landlord for results.

The tenants formed a union, named Inquilinos Unidos (Tenants United), and in June held their first meeting with a property manager from Elmington to discuss their issues and needs. From that meeting, the property manager committed to providing Spanish translations of the lease, completing emergency repairs the same day and repairing lighting fixtures and more.

Management also agreed to work with Inquilinos Unidos to advocate to owners about security cameras. Currently, cameras exist on some of the buildings, but not all.

The number of Hispanic renters in Nashville has been climbing as the overall Hispanic population has increased in the last decade. The most recent data from the Metro Public Health Department puts Davidson County’s Hispanic population at 10 percent of the overall population. The same data shows that from 2011–2015, 16 percent of Metro students spoke a language other than English at home, and Spanish speakers are the largest group in that percentage.

According to Kathy Trawick, executive director of the Tennessee Fair Housing Council, limited-English speakers are among the most susceptible to being taken advantage of by landlords.

“We’ve seen situations where the landlord will slip something into a lease that they wouldn’t ordinarily do if the person could speak English, like requiring the tenant to pay the flood insurance—stuff that is not generally accepted practices—because they believed the tenant wouldn’t know the difference,” Trawick said.

Attorneys with the Tennessee Fair Housing Council work to resolve housing discrimination cases under the federal Fair Housing Act. A bilingual paralegal has been able to assist Spanish-speaking renters in Nashville in need of legal help.

“Some of our clients are undocumented, so we try to be very cognizant and sensitive, and let the client drive the train because you do not have to be documented to get our services,” Trawick said. “However, when we reach out to the landlord and try and resolve the problem—even though the Fair Housing Act says you cannot retaliate—we don’t have any control over a really nasty landlord who would go to ICE [U.S. Immigration and Customs Enforcement].”

At the time of print, Elmington had not provided Spanish versions of leases to tenants at Union, and renters are still waiting to hear about additional security cameras being added to the complex.

“We want peace and to work calmly with everyone. You saw what just happened,” a tenant told me, referring to the armed robbery. “It’s too early with the sun still up for something like that to happen.”

Another tenant inquired, “What do they want, someone dead? A grave?”

Courtesy of The Contributor / INSP.ngo