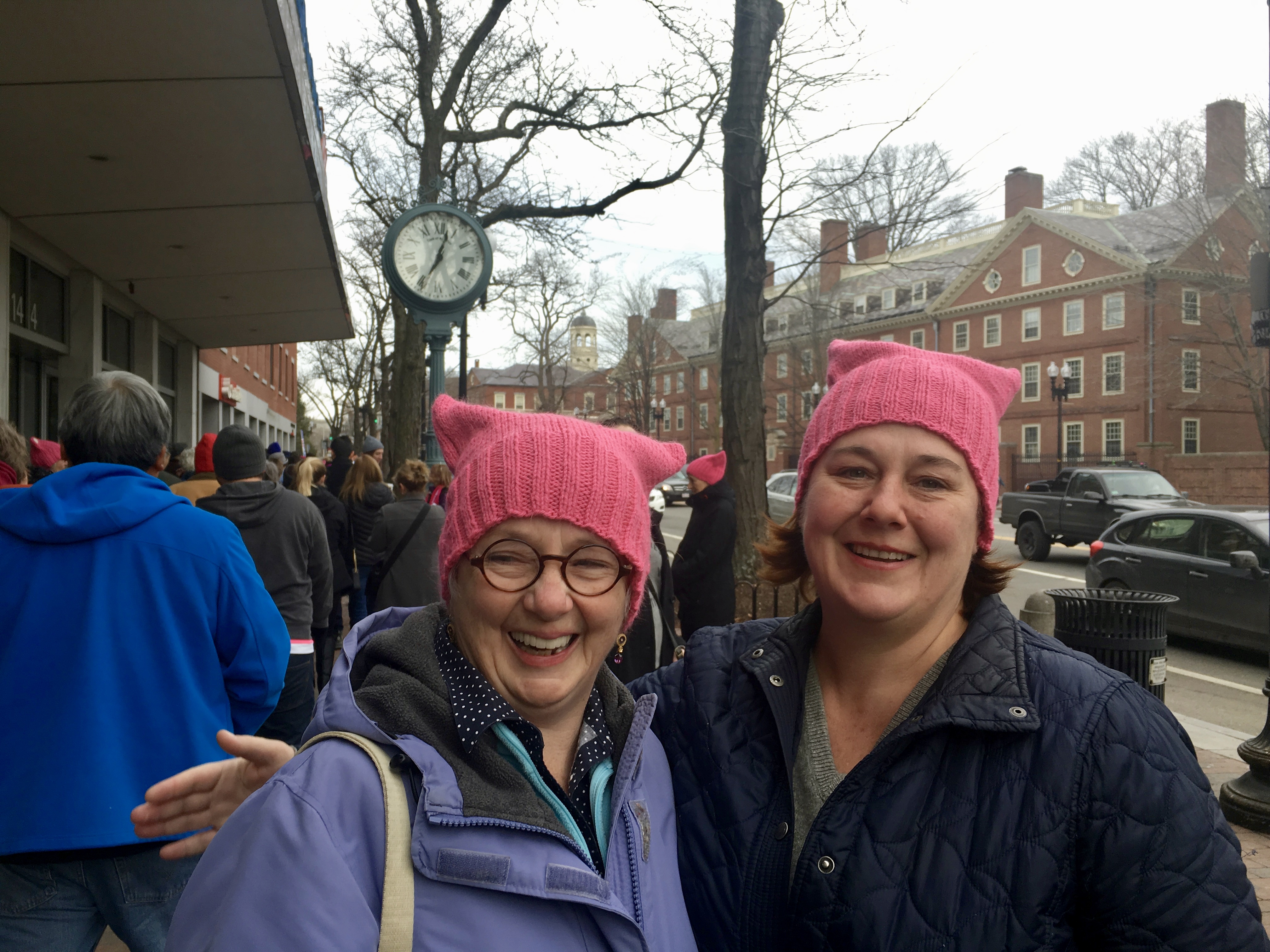 Lorraine Doyle has protested for women’s rights in Cambridge for 56 years.

“For me, protesting is a lifelong event,” Doyle said. “It is every chance to go further with my cause. Women first, men second. They don’t like it, they can step aside. It’s time. That’s really how I feel. I am an arch-feminist and I make no apologies.” She has bright eyes and an infectious smile. She has fought “right up against the cops, the dogs and the guns” at women’s marches for over half a century.

“It started when I read Simone de Beauvoir in 1962,” she added, referring to the famous French philosopher who paved the way for modern feminist thought.

At the corner of Massachusetts Avenue and Church Street, Doyle moved with a crowd of nearly 100 men and women toward Cambridge Common on January 21, the second-annual Cambridge/Boston Women’s March took place on the Common.

It attracted thousands of protesters.

People of all ages demanded change to the current political landscape.

“The last Women’s March was right after Trump got elected, so it was an important time to step up, for sure,” a 13-year-old Clara said, commenting on the importance of these marches. “I feel every woman should feel personally affected by Trump—for what he’s said and what he’s done.”

Calls for inclusivity and immediacy distinguished this year’s Women’s March from last year’s. The January Coalition organized the protest. It presented speakers from a range of public offices and a social justice organizations.

Renamed the “The People’s Protest,” the 2018 Women’s March sought to better reflect the intersecting challenges and issues faced by women from minority communities. Commentary that last year’s march was built for white women abounded.

“Women in Cambridge have been serving since 1880, but it took us 92 years to give an equivalent position to a woman of color,” said Denise Simmons, former Mayor of Cambridge. She served as the first openly lesbian black mayor in the country’s history. Beside her stood Sumbul Siddiqui, the first Muslim woman ever elected to the Cambridge City Council.

After Simmons and Siddiqui spoke, Rhonda Gibson, the founder of MassADAPT, pointed to the oppression of people with disabilities in the U.S. Gibson noted that women who cannot stand up without assistance cannot be screened for mammograms, and if such accomodations aren’t mandatory they may not be made at all.

“With the Affordable Care Act, President Obama made sure that there was diagnostic equipment that was mandatory across the United States. Now, he that calls himself ‘President’ is trying to get rid of everything we’ve facilitated for 33 years,” said Gibson.

Several speakers advocated for action on behalf of immigrants in the United States, including Massachusetts ACLU representative Laura Rótolo, who took the allegedly blue state of Massachusetts to task for its less than progressive tendencies toward immigrants’ rights.

“We pride ourselves, we say we are democratic, that we are a blue state, that we are a progressive state,” Rótolo said. “When it comes to immigrant rights, that is not true. And shame on us…When qualified drivers can’t get a license in Massachusetts because of their immigration status, shame on us. By allowing local officials to act as immigration agents, we’re acting as a bad cop. So, shame on us.”

Speakers called out other forms of oppression and discrimination: Murders of transgender men and women, violence against women in jails, police shootings of people of color, neglect of the people of Puerto Rico, oppression of women in the military, and people dying from poverty.

“We need a revolution on election day. But we also need a revolution to continue in between election cycles. We need to mobilize our community center, senior commissions, council hall chambers, churches and mosques,” Siddiqui stated. The November 2018 elections focused much of the rhetoric at the march.

The call for political mobilization resonated with the crowd. Senator Elizabeth Warren wrote a speech for the protest that the emcee of the March, Zayda Ortiz, delivered. Warren demanded immediate action.

“Democracy isn’t something we can only care about every four years. I want you to join a group. Volunteer for voter registration drives outside your supermarket, or on your college campus, and help pull in new people. If there’s no place to volunteer, build your own group. Think about running for office. Yes, these things are hard. But that is what it takes to make a real change in America today,” Ortiz said, reading Warren’s words.

Young women affirmed political representation as the key to ending oppression in America.

“As much as protests and gatherings are good for raising awareness and solidarity, I think pushing for more women in the government and women’s representation is more important,” said Plearn Aroonchote, an undergraduate student at Tufts University.

Doyle noted that women serving in government is the clarion call of her activism.

“Women’s progress has not been enough. It is never enough. I won’t be satisfied until there are nine Supreme Court justices that are women. I would like to be there when it happens. For me, in Cambridge that means an all women government. I mean all. Then I might be happy, for a while–until there’s a new goal to move toward.”