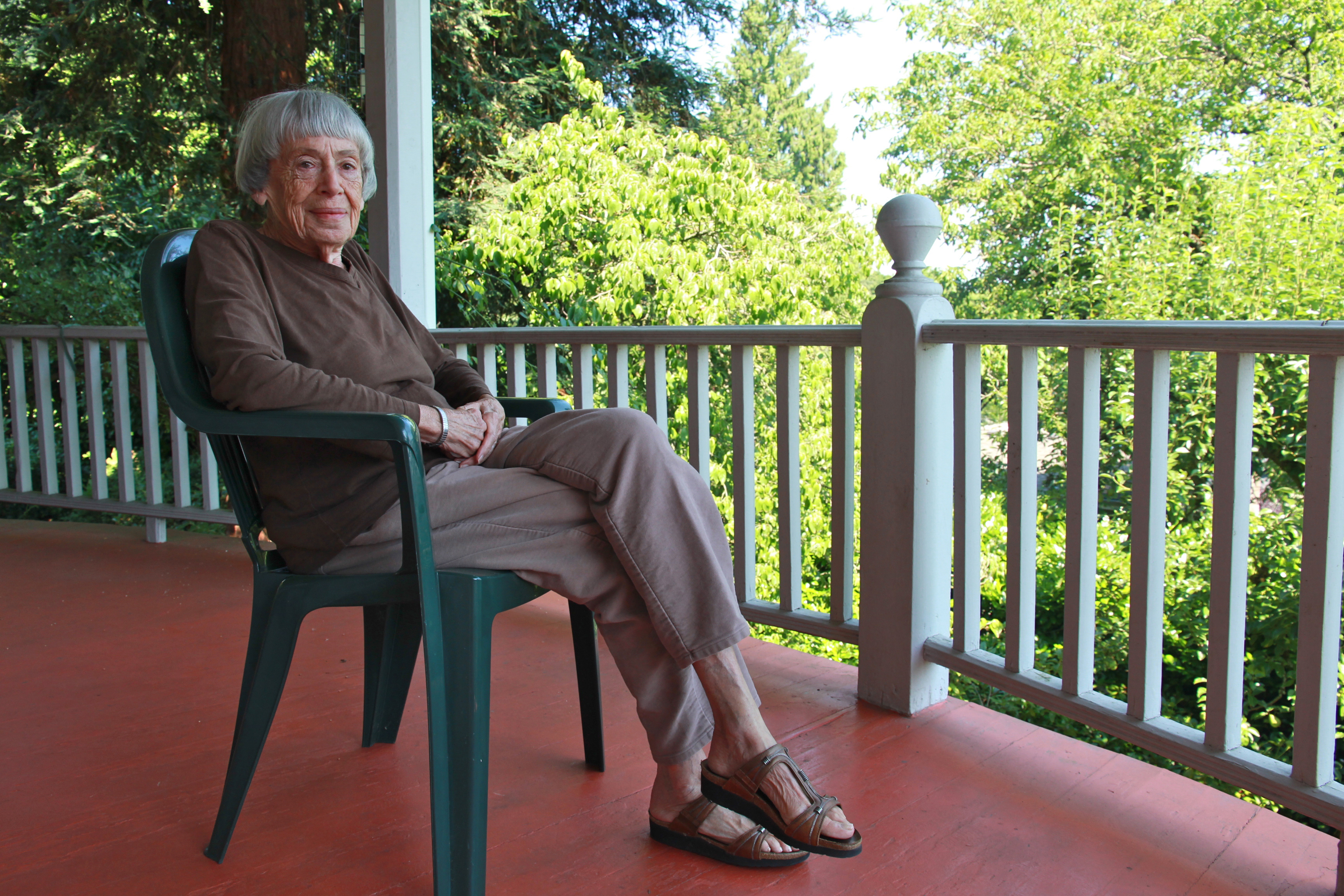 Ursula K. Le Guin, who has been called “America’s greatest science fiction writer”, passed away this week at the age of 88. Before her death, she spoke to Portland’s Street Roots. In this conversation, she voiced her support for a free press, arguing that is liberty in action – something that terrifies those who want to rule the world.

Many consider the arts, and the ability to produce art, intrinsically connected to freedom of expression and essential to ensuring a democratic and egalitarian society. “Artists are advocating for a highly individual approach to humanity. Artists, by definition, are anti-authoritarian,” is how Andrew Proctor, the Executive Director of Literary Arts, put it in “The Arts for All” (Street Roots, Sept. 15).

That message is one that Ursula K. Le Guin has espoused for decades. Le Guin is one of Oregon’s grand dames of literature and the author of the classics The Left Hand of Darkness, The Dispossessed, and the Earthsea trilogy. In 2016, the New York Times described her as “America’s greatest living science fiction writer.”

In 2014, the National Book Foundation awarded Le Guin the Medal for Distinguished Contribution to American letters, a lifetime achievement award for contributions to literature. When she accepted the award at the National Book Award’s ceremony, Le Guin ripped into the commoditization of publishing and those who prioritize profit before art. Calling Amazon a “profiteer,” she said, “books aren’t just commodities. Resistance and change often begin in art.”

Le Guin, who at the time of this interview was 87, took time to respond to a couple of questions from Street Roots regarding the importance of the arts and the threat individual expression faces under the Trump administration.

The proposed elimination of the National Endowment of the Arts (NEA) and the National Endowment of the Humanities (NEH) are a continued attack, by the Trump administration, on arts, letters, journalism and intellectualism. One could say this is a continuation of the “culture wars” of the 1980s and 1990s. When we talk about the administration’s proposal to eliminate the NEA and NEH this time around, what is under threat?

Ursula K. Le Guin: I wasn’t familiar with the term “culture wars.” Wikipedia tells us that it goes back to a 1991 book, and that those who use the term are mostly talking about a struggle between religion and culture.

In any definition of the word “culture” that makes sense to me, religion is an aspect of culture, just as technology, politics, art, education, etc. are. So talking of a struggle between religion and culture is kind of like talking about a struggle between your nose and your face.

In any case, I am deeply troubled by the way we put everything we talk about in terms of struggle, fighting, battle, and war.  I believe that the more we can avoid this binary, oppositional approach to every problem and undertaking, and replace the metaphors of war and conquest with those of discovery and co-operation, the sooner we’ll arrive at a much more useful and hopeful mode of thinking and behavior.

The current administration and its most vehement supporters are entirely trapped in the war mode, the us/them mentality: “They don’t think like me, so they’re my enemies. They’re out to attack me and all I believe and am — so I will attack them, defeat them, silence them.”  A dangerous mentality to put into power.

Now I can’t resist quoting (Friedrich) Von Gentz, the head of the Austrian Imperial Police: “As a preventive measure against the abuses of the press, absolutely nothing should be printed for years. With this maxim as a rule we should soon get back to God and the Truth.” That was said 200 years ago! What’s changed?

People who believe that they have a corner on God, the Truth and Power don’t change (even though the Gods and the Truths may change). For the us/them people, there is only one book: “our” holy book; the Bible, the Koran, the Thoughts of Chairman Mao. All other writings are dangerous, evil. Information is a threat.  Education is an enemy. The sciences are all fakes. Arts and humanities that don’t directly preach God are against God.  The men in power speak for God — nobody else can. Nothing should be printed for years.

When you accepted the National Book Award in 2014, you said in your speech, “Hard times are coming, when we’ll be wanting the voices of writers who can see alternatives to how we live now, can see through our fear-stricken society and its obsessive technologies to other ways of being, and even imagine real grounds for hope. We’ll need writers who can remember freedom – poets, visionaries – realists of a larger reality.”

What role does writing and the arts play in ensuring individualism, free thought, and an egalitarian society – the ideals of our country, at least when it was founded?

As I see it, writing and the arts (and the sciences, and all learning) don’t play a role in ensuring our freedom – they are our freedom – the heart of it. The arts and sciences are the shared property of each of us and all of us in each country and all countries and all centuries. They are (ideally and sometimes actually) where every voice gets to speak, and everybody gets to hear what’s said.  They’re our true common wealth.

The free press, the honest artist and scientist, accept no orders from above, resist outside control, give free thought free play. That’s liberty in action.

Those who want to control the world are terrified by it. They see The Enemy in every first-grade classroom. (So: don’t teach, just test!) Their own demons of selfishness and denial drive them to suppress efforts to discover and share factual truth – in the press, in the schools, in the sciences – and efforts to guess at truths beyond the factual, in all the arts.

Greed, fear and denial are dead ends. If we try to fight the reactionaries with their own weapons of hatred and contempt, we’re letting their acts dictate our acts — following their way. In that direction there’s no freedom and no victory. Just wreckage.

Let’s go on going our own way, doing our own work. Workers in science and the arts, all workers doing any honest work, are obliged (at least some of the time) to look straight at reality. They see an infinitely complicated world in which right and wrong can’t be dictated, and each of us is responsible – to God, to other people, to yourself – for our thoughts and acts. In that great world all things are possible, even peace and freedom.