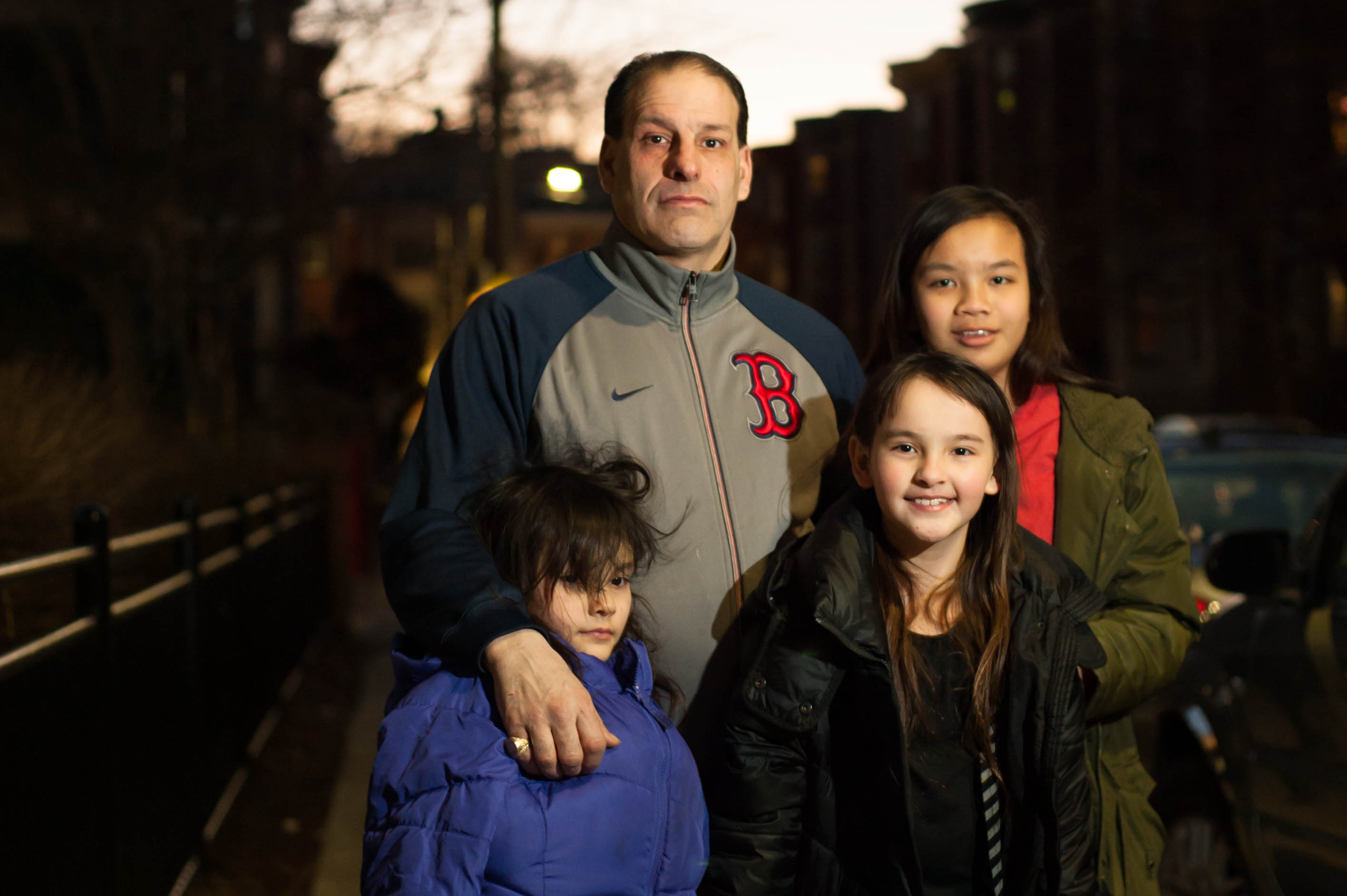 Robert Sparks and his wife Nhan, a green card holder and native of Vietnam, left their Dorchester home to attend a meeting with ICE – Immigration and Customs Enforcement – at an office in Burlington, Massachusetts on October 2.

This was one of several check-ins Nhan had with ICE since her run-in with the law in 2012. However, from the onset this one was a bit unusual—it was early.

“We went there and immediately I knew something was wrong. There were a lot of guys there with handcuffs, there was tenseness,” Sparks said.

ICE detained Nhan and held her in a facility in New Hampshire.

Nhan was deported to her native Vietnam, where she has been ever since. The last time Sparks saw his wife in person was Saturday, November 18.

A family searches for answers

Nhan’s story isn’t much different than many others’ in the Asian immigrant community who find themselves being deported at a moment’s notice.

Bethany Li, senior staff attorney for the Greater Boston Legal Services’ Asian Outreach Unit, said more people are being told to get their travel documents in order before heading to their ICE check-ins, particularly those in the Southeast Asian community.

Kevin Lam, a community organizer at the Asian American Resource Workshop in Dorchester, said nationally an increased number of Asian immigrants have been deported since April 2017 and there has been a noticeable uptick in cases of Asian immigrants being detained by ICE.

“Nhan’s case was like the very first one that we came across locally and I think that was a really big learning lesson for us,” Lam said. “But I think it’s changed the conversation around immigration and deportation. When it’s talked about it’s always framed as like a Latinx issue and actually folks don’t really know that deportation is impacting Southeast Asian folks.”

Those in the Southeast Asian community rallied around Nhan’s family when Lam and the Asian American Resource Workshop launched a donation campaign at YouCaring.com to help Nhan’s family financially. The campaign surpassed its goal of $3,000.

“I think one of the things that was important for us to ask, given the circumstances, what support does Nhan want and or need, and her main concern was about her family and her children,” Lam said. “I think a lot of folks didn’t even know this was happening locally in the community on a more public scale and so a lot of folks wanted to support in some way.”

A Christmas photo of the family. Nhan, far left, was deported to Vietnam after attending an early check-in with ICE. Photo courtesy of family.

At a time when immigration has become a divisive topic at the local and national level, a lot of confusion has created fear in many immigrant communities.

Li said there may be confusion for those protected from deportation by repatriation agreements; in particular, the 1995 agreement between the U.S. and Vietnam says that immigrants who have been in the country prior to 1995 from Vietnam specifically can’t be deported. However, Li  said understanding in the Vietnamese community may differ from the actual law.

Sparks was caught off guard when his wife was deported, for example. He thought Vietnamese nationals just weren’t getting deported.

“There might be this kind of general understanding in the community that we’re not as targeted as a result of that agreement,” Li said.

Nhan was brought to the U.S. after 1995, meaning she is not protected by the repatriation policy. Her situation is complicated due to the fact that Sparks and his family sought help after she was deported.

Immigrants’ general understanding is further complicated by the fact that more Southeast Asian folk are being detained.

“I think we are aware of pre-95 people that have been detained. And they shouldn’t be detained because based on that repatriation agreement there’s supposed to be no real possibility of them being deported to Vietnam,” Li said.

“One difficulty has been that we met Robert really late in the game,” Li said. “He came to our in-take at Viet-AID [the Vietnamese American Initiative for Development building in Fields Corner, Dorchester] I think a little less than a month before Nhan was deported.”

Li said it is possible that Nhan had gotten her green card, or permanent residence status, after marrying Sparks, but had an open order of removal, or order of supervision, against her for a prior criminal offense.

“I think what would have triggered the check-ins was that she was ordered deported, but for whatever reason she wasn’t actually deported,” Li said. “It could be because she was not a priority case under the Obama administration … it’s not totally clear in this case for me because we haven’t seen any of the immigration documents.”

Priority cases for deportation have widened under the Trump administration, Li said. Yet Nhan’s case isn’t clear enough to say why she was deported.

Coping without mother, wife and co-provider in the Sparks household

Since her deportation on November 20, days before Thanksgiving, things have been tough for Sparks and their three daughters. Without a second income, Sparks has been able to get by, but is unsure if he can last without his life partner.

Sparks works late nights as a bouncer at night clubs. Nhan worked at a nail salon when she was in the U.S.

“It’s tough. It’s really tough. And of course me being dad I’m left to deal with it all,” Sparks said.

On top of the need to provide for his family financially, Sparks is also alone to help his daughters cope emotionally. Trying to make ends meet means he doesn’t see them as often as he’d like.

“It’s a lot of burden on them and me, and her, because she worries constantly,” he said about Nhan. “She’s never called me so much in my life … it’s been insane because she’s just missing [the kids] more and more and more.”

As of now it seems nearly impossible to bring Nhan back into the U.S.

The biggest factor that led to her deportation seems to be her and her husband’s 2012 run in with the law. They both served time, and Nhan was ordered to check in with ICE ever since.

“To tell you about that day is just misery,” Sparks said. “You’re saying bye to your wife, mum … there’s nothing to describe it. It’s just misery. It’s torture.”

Bethany Li said it is possible to get a judge to vacate a criminal record, which could ultimately end a deportation case entirely, a process she’s had experience with in the past.

“Before Nhan we have worked on cases with people who are in the deportation process and [we] actually have been able to work with a man whose criminal record has now been vacated,” Li said. “There’s a possibility now that judges will look again at those cases to understand what happened and potentially vacate those criminal charges, the criminal record.”

Li got a hold of Nhan’s criminal records shortly after she was deported.

Although Nhan has been reunited with her mother, who she left in Vietnam eight years ago, there have been rumors about the reason for her return, making readjusting to life in her home country difficult.

Sparks said in Vietnam they think the reason Nhan is back is because he kicked her out or left her, which isn’t the case. And having to split a salary with her mother in her native land also makes her living situation there more difficult.

“She had a hard time to adjust, very hard adjusting over there as well,” Sparks said. “I mean you’re here, you left all the pains and sufferings over there, working for $2 a day, come here and then all of a sudden Land of the Free; you start to work hard, make money, get a little bit of money and it’s gone.”

Uncertainty of what can be done and why exactly she was deported makes her case seem near impossible to solve, but Sparks hasn’t lost hope.

In fact, Sparks is driven by the hope that his wife will one day return to him. It’s what’s given him power to speak about his family’s situation and seek whatever help he can.

Fixing the flaws in the system to allow one-time offenders to become productive citizens of the country is all that Sparks asks for.

“One crime, one crime in her whole life probably and she’s gone,” Sparks said. Deportation “isn’t like a thing that only affects one person or two people, it affects a lot of people.

“It’s disrupted her family there, it’s caused strife over there because she’s [considered] a burden,” Sparks said. “I don’t know where I go from here. I don’t. I just hope that this shines a light, that people see [that] deportation isn’t the answer.”

Li said it is time for those in the Southeast Asian community to be more public of things they might be ashamed of– like criminal records. She hopes public legal immigration screening clinics may solve this issue and help those in situations similar to Nhan’s.

“The purpose of [the clinics] is this preparation, to understand what people’s situations are, to make sure that they have all of their immigration and criminal records, to look at their whole situation and figure out what forms of relief they have, whether it be the vacating of their criminal records or some other form of immigration relief,” Li said.

Lam said it is important for community members to come together, seek help and engage in this topic given the heightened political rhetoric.

“There’s such a taboo to talk about it, and so I think we really encourage folks who are worried or are looking for support to be able to reach out and contact us just to figure how we can work together ahead of time before anything happens,” Lam said.

Li also wants those immigrants protected by repatriation policy to get their questions answered even if they feel safe from deportation as it seems more people are being called in early by ICE.

“It’s hard to generalize and there’s no need to create lots of fear but people should go talk to a lawyer [if called in early],” Li said. “This is true for immigrants generally, that everyone and anyone is a target and that’s certainly a widening of the policies previously used to consider who would be targeted for deportation. And Southeast Asians haven’t been targeted in this way maybe ever … it’s only last fall that people started questioning whether they would be able to continue to live here.”

Nhan’s story may just be a motivating factor for people to seek help and for those to realize the complexities of the immigration and criminal justice system.

“In some ways Robert and Nhan are probably perfect examples of the stark difference of what happens between a U.S. citizen and a lawful permanent resident, like a green card holder, who have served their time for similar crimes and the person who’s a green card holder gets deported. And only now she had an order of supervision,” Li said. “Suddenly you’ve created a family that is now a single-parent family with three children when before you had two income earners and they were relatively stable and relying on each other to take care of the family; I don’t see why that is good policy.”