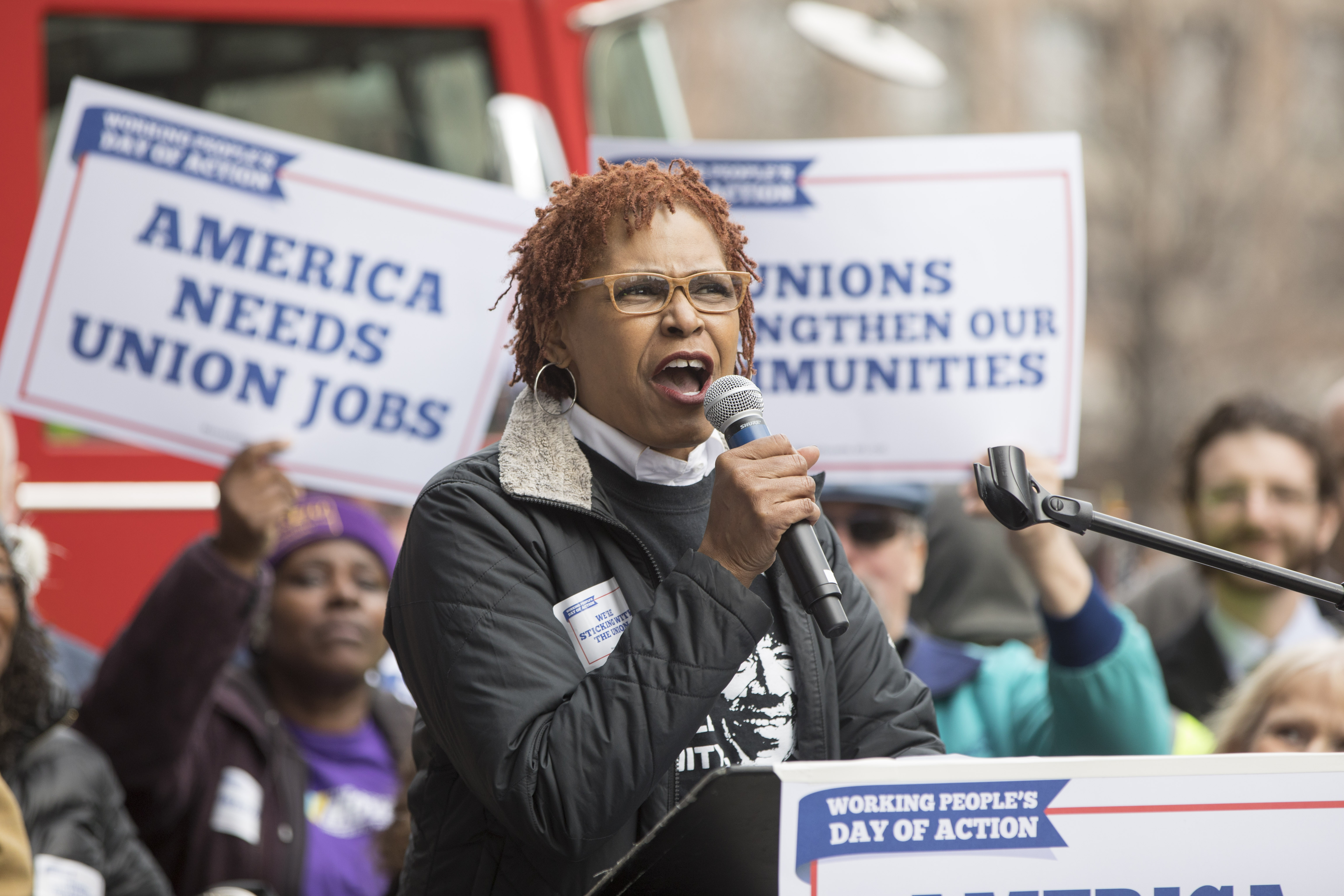 In just one of 11 rallies across the state of Massachusetts hundreds of union workers crowded outside of the Boston Firehouse, Monday, March 3 to raise their voices against a pivotal Supreme Court case challenging the constitutionality of imposing union fees in the public sector.

The opening remarks of Janus v. American Federation of State County and Municipal Employees (AFSCME) heard by the Supreme Court on Monday, coincided with Working People’s Day of Action, a day recognizing the rights of working people to come together in strong unions.

Mark Janus, a child support specialist for the Illinois state department of Healthcare and Family Services is not part of AFSCME, but is required to pay “agency fees” to the union for any benefits that he might incur as a result of union bargaining. More than 20 states uphold the legality of agency fees.

In the case brought in front of the Supreme Court, Janus is challenging the constitutionality of agency fees under the first and fourteenth amendments. But to the hundreds of middle-class workers, who rely on unions to ensure their livelihood, this case represents an attack.

Kathryn Hall, who works as a steward for the state of Massachusetts, drove an hour from Plymouth to be in Boston for the rally. She said that jeopardizing the constitutionality of union dues is jeopardizing her livelihood and her safety.

“If the unions don’t have dues then they’re not gonna be able to hire the lawyers and advocate for the people who need it,” said Hall, “So really what’s going on is union busting and trying to make us a right to work state which means we all have the right to work for less and die more often on the job.”

At the rally, Senator Elizabeth Warren called on the Supreme Court to make the right decision and defend justice for the workers. She said, “Corporations and anti-union forces are doing everything they can to tilt the scales in their favor. But I want to be clear about this, we’re here today because we have not given up. We’re ready to fight back.”

Lee Saunders, president of AFSCME flew from Washington D.C. to speak at the rally. He reminded the crowd of the last time AFSCME faced a major change.

In the Memphis sanitation strike fifty years ago, 700 of the 1,300 African American sanitation workers went on strike, provoked by the death of two of their workers due to the dangerous working conditions. AFSCME soon supported the strike and recognized the local union, which began in February 1968. The strike ended months later in April, when the city agreed to recognize and negotiate with the union.

“We’re going to commemorate that day. Commemoration is good. We should always understand where we come from,” Saunders said. “But brothers and sisters, this should not only be commemoration this has got to be a call to action!”

In the 1977 Abood v. Detroit Board of Education case, the Supreme Court, in a landmark decision, ruled agency shops constitutional under the first amendment. The court rationalized that since the union contract covers all workers, everyone should contribute to the cost of negotiations even if they choose not to join the union because they would still reap the benefits.

Prior to the opening remarks, the Trump administration submitted a brief supporting Janus, the latest in a series of actions to roll back union power.

Mayor Marty Walsh reminded the crowd the importance of voting for candidates that protect the interests of the working class in the capital. He said this court case is all about dividing workers, eliminating benefits and driving down wages.

“Instead of pulling down public workers, what we should be talking about is how we should pull up all workers. Instead of driving American workers we need to figure out how to pull them all together,” Walsh said, “Instead of saying us and them all the time, how about we start with we more often, as in ‘We the people!’”