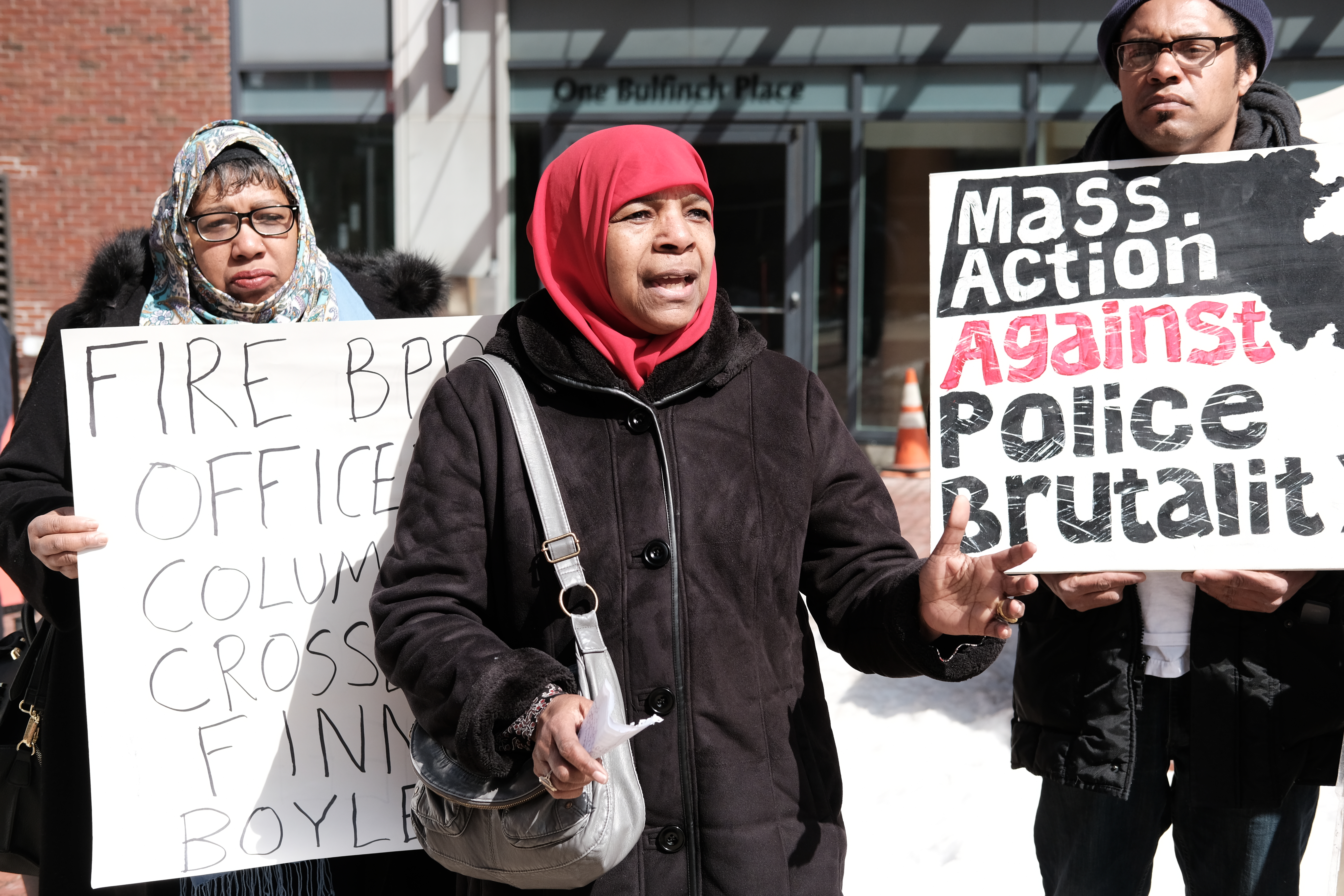 Last Monday, Rahimah Rahim referenced DeGruy’s work as she spoke about the loss of her 26-year-old son, Usaamah, killed by members of the Boston Police Department in 2015.

“When we commit or we think we’re committing a negative act such as what the police do– and the D.A.’s office, all of them, the police commissioner– they know that what’s happening is wrong, so they try to make it right, in their mind, by saying this one was a terrorist, that one was a thug, and labelling them other ways. But what they’re doing is not right,” she said.

“Murdering innocent people is not right.”

At a gathering in front of the Suffolk County District Attorney Dan Conley’s office, organized by Mass Action Against Police Brutality, Rahim and Hope Coleman, the mother of Terrence Coleman, recounted the loss of their sons.

“He was standing at a bus stop in Roslindale at the CVS parking lot, a bus that he often took to go to work. He worked for CVS as an undercover store detective. He was a hard-working young man. A kind young man,” Rahim said.

While different narratives emerged after the death of Usamaah Rahim in 2015, his mother emphasized a few points. One was that he was not given adequate medical treatment, despite the arrival of an ambulance.

Rahim told the crowd that she still does not know the identity of the police officer or the FBI agents who were present at the scene, and said she wants them brought to justice.

Rahim also mentioned state trooper Matthew Sheehan, who was suspended earlier this month for writing racist and profane online comments. “That’s a police officer. That’s someone were supposed to respect,” said Rahim. “They should be held to a higher standard than that.”

Rahim states the narratives about her son found on public forums like Mass Cops perpetuate an image of him as a terrorist. The facts surrounding his connections to terrorist organization remained disputed by different sources.

“No one will care that my son was murdered. My son was not a terrorist. But that was a label that they stuck on him to separate his death from the community, so that nobody would stand with me. Nobody would say those officers were wrong for what they did. Nobody. But I’m telling you: I’m going to fight this. I want that case opened. I want those police officers brought to trial.”

Hope Coleman also told her story, regarding her son Terrence’s death, which occurred two years ago.

“My son had schizophrenic paranoia. He was quiet. He sat outside for three days in October. I know he didn’t take his medicine, so I called the doctor on-call that night,” said Coleman.

After being instructed to call an ambulance, she dialed 911, and shortly after the police arrived.

“I didn’t ask for the police, I asked for the ambulance,” she said. The officers insisted they would try to help, and after several minutes told Coleman EMS was on the way.

After Terrence Coleman made a statement, his mother says, the EMS’ tone rose. Ms. Coleman states that her son reached forward to grab his bag of CDs and DVDs, when the police officers lunged forward, knocking his mother over, and shot him twice.

She is devastated to this day.

“My son’s birthday is coming up March 29th and he can’t celebrate with me,” said Coleman, in tears at the gathering. “I don’t have my son to say ‘Good morning, how are you Mom? You need anything? And I can’t tell him I love him because he’s not here.”

Suffolk County D.A. Conley decided this past August to forego pressing charges against the police officer involved in Coleman’s shooting.

While Coleman acknowledges that various Boston-based news sources reported that her son had been violent with the police, she maintains that her son was denied justice.

“I went all the way to Minneapolis to speak out and I made the paper out there and they heard me. And I’m going to keep on going. Because my son didn’t deserve this. It wasn’t his time, it wasn’t his time to die. I didn’t bring my son into this world to be shot at.”

Social media has provided a tool for law enforcement officials to look through the content of civilians.

Rahim notes that the District Attorney and other individuals responsible for monitoring the actions of police officers should also use these tools.

“Just like anybody that’s been a victim of the police crime, they go all the way back in their social media and read what they’ve written for five years,” said Rahim.

“Why don’t they do that same method with the police that are shooting these people? Go back into their social media and see what kind of stuff they’re writing. What are they thinking, what are they writing. Because there’s something wrong with them. And there’s something wrong with anyone who defends them and says that what they done is justified. It’s not justified.”

MAAPB will host events in the future to continue a campaign against the actions of the police.

The next event is a rally on April 4, the 50th anniversary of the assassination of Martin Luther King Jr., in front of the Boston Police headquarters in Ruggles.

“It’s only when we stand together in a united voice, in our millions— we do really believe we’re the true majority, but the truth has to come out,” said Brock Satter, an organizer at MAAPB.

“We have to go back to the methods of mass action. What we saw in the last few years wasn’t just an episode. This is the new normal. Protests all become a regular feature of this country,” he said.

The full content of the mothers’ speeches can be found here.