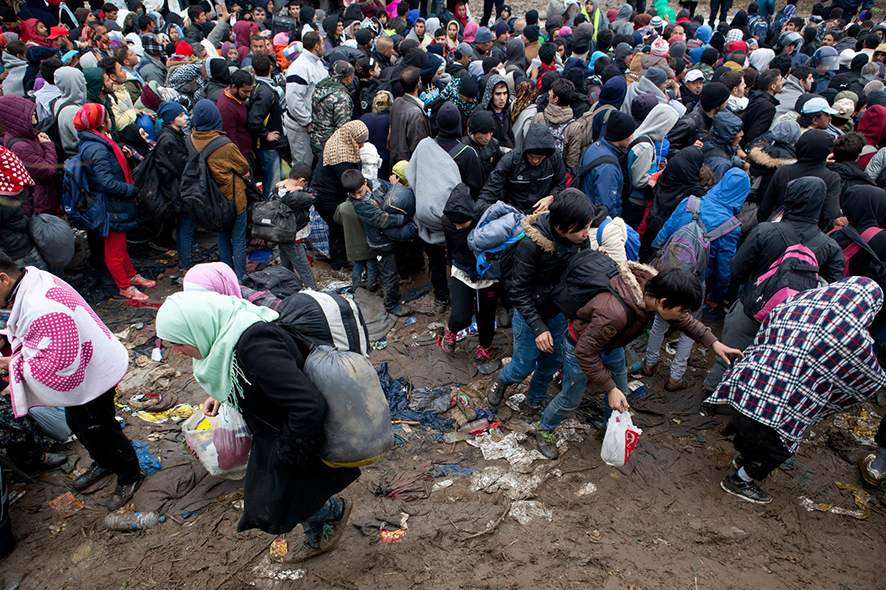 Two years have passed since the outbreak of the ‘refugee crisis’. ‘The migrant crisis’ is an expression that European and domestic officials use to describe tens of thousands of suffering people who are surviving in inhumane conditions in refugee camps, attempting to shown them as a group of enthusiastic travellers, in search of a better life. However, the expression ‘refugee crisis’, although somewhat more considerate towards the people who are finding themselves in a rare vulnerable and disadvantaged position, in fact serves much more to hide reality than to really explain the circumstances in which refugees find themselves, but also of those who mediate their inclusion in their new environment.

The word ‘crisis’ means the moment of decision, a potential change, hence instability, and hundreds of thousands of people fleeing from war-torn areas and poverty have only one choice – to try and survive by exposing the abuses of smugglers and human traffickers. Crisis also means radical discontinuity, a situation in which the former inhabitants of Syria, Afghanistan and Iraq are the result of the continuous destruction and imperial projects of NATO, to which the politicians who now give themselves the right to classify people fleeing wars (refugees) and people fleeing from hunger (‘economic migrants’) voted in parliament. Discontinuity or crisis, therefore, relates to us, the citizens of the European Union and its periphery, who collect humanitarian aid, we try to demonstrate our solidarity with refugees and we hope that the time in which people wrapped in blankets, waiting for hours sitting on the tarmac in front of bus stations will soon become a thing of the past. Furthermore, crisis also means the moment in a play when the action reaches climax, and is followed by absolution. But it is apparent that the refugee crisis, as time goes on, intensifies over the backs of the refugees, and an end to their torment is no where in  sight. Countries such as our own [Serbia], whose role it is to protect the borders of the European Union, have tightened their refugee movement control mechanisms, which is why a huge number of people have been practically interned – while their freedom of movement is limited, waiting months to cross the border, refugees are exposed to police terror, smugglers, and those who are the poorest and most vulnerable, among whom are many unaccompanied minors, have been forced into prostitution.

If, in addition to linguistic analysis, we reach for the historical perspective through which we can read and ponder the issues of migration and refugees, we realise how quickly the political essence of these concepts may be stripped bare.

“Before this war broke out we were even more sensitive about being called refugees. We did our best to prove to other people that we were just ordinary immigrants. We declared that we had departed of our own free will to countries of our choice, and we denied that our situation had anything to do with ‘so-called Jewish problems.’ Yes, we were ‘immigrants’ or ‘newcomers’ who had left our country because, one fine day, it no longer suited us to stay, or for purely economic reasons. We wanted to rebuild our lives, that was all. In order to rebuild one’s life one has to be strong and an optimist. So we are very optimistic”, wrote Hannah Arendt in her famous essay ‘We Refugees’, written during the Second World War.

Words such as migrants/immigrants/migration create almost a scientific, quasi-neutral category to cover up the truth about the conditions under which people are forced to make such decisions. If these terms are used by those women and men belonging to marginalised groups as a strategy of mental resistance, in question is one type of political imagination which helps people to take their past experiences and integrate them into the present new collective. If these words are uttered by high level officials who, avoid using the word ‘refugee’, this means in fact that they are avoiding accountability and is, therefore, clear political manipulation. If the meaning of truth, as maintained by Hannah Arendt, is indeed to  control power, then the insistence on terminological differences is an important step towards disagreeing with the foul play of the ruling elite which states that refugees are divided into those fleeing from war, struggling to survive, and those who are in search of a comfortable life, who will ‘hijack’ our jobs tomorrow.

The humiliating treatment of all non-Europeans within the borders of the European Union, the toxic stereotypes relating to the migrant who will take over someone’s job or misuse the welfare system, is a consequence of the fact that even those countries which make up this union do not have equal political and economic power. This is how the “migrant crisis” has fully diversified the long curtailed optimistic belief that those living on the periphery of the European Union will one day live by European standards.

In Hannah Arendt’s political philosophy, optimism is always a code used to camouflage desperation and hopelessness. Therefore, you might say that the lack of optimism of those working “in the field”, i.e. all those who are directly or indirectly interested in resolving the refugee crisis in favour of refugees, signals that it is time for resistance, i.e. the Gramscian [of Italian Marxist philosopher Antonio Francesco Gramsci] “pessimism of the intellect, optimism of the will”.

Although the context of which Hannah Arendt writes – an exodus of the German Jews during the 1930s – is not comparable to the conditions of asylum seekers across the European Union and refugees in Serbia, the essay ‘We Refugees’ is relevant today because it points out to us an essential, experiential difference between ‘migrants’ and ‘refugees’, as well as the history of a political vision which, when refugee issues and the human rights of refugees are in question, is still of great significance today. “The Union of European Nations broke up the moment they allowed this to happen, and because they allowed for the weakest among them to be excluded and persecuted,” Arendt concludes.

That refugees need to be protected in a universal way – by international law – is an idea that emerged after the cataclysm of the Second World War. If transnational unity is necessary in order to prevent circumstances of mass and forced movement of populations, an idea that had emerged after the First World War experiencing a boom after the Second World War.  Given that the European Union, at least nominally, has inherited this tradition, we should not be surprised by the disappointment caused by the lack of political will in the European Union to provide refugee assistance among many who saw the European Union as a guarantor of freedom and equality.

Recognising the fact that for European institutions the smooth movement of money is a far greater priority than the free movement of people, the refugee crisis has in fact become a crisis of the European Union. The root of this crisis lies in the foundations on which this union was established – economic power, not solidarity and equality among nations. The optimism of those who still trust that the European Union will provide a “normal life” for refugees actually conceals, in the words of Hannah Arendt, “the hopeless sadness of assimilation”.

In order to build a Europe based on true mutual respect and transnational solidarity, it is necessary to see our own accountability, another important concept by which the political philosophy of Hannah Arendt is recognisable in building an alternative.

Imperialism, a policy of maintaining the economic supremacy of capitalist superpowers by establishing control over other countries, is a global system that produces wars and hunger from which people from the Middle East are fleeing. But this global order remains largely owing to local, obedient regimes. Given that we live under one such regime, if the suffering of the refugees touches us, it is necessary to ask the following question: what good can a government, that these days is bragging about the export of weapons and investments in the military (or in the language of political euphemisms – defense) industry, bring to those who need it?

Translated from Serbian by Dragana Kragulj