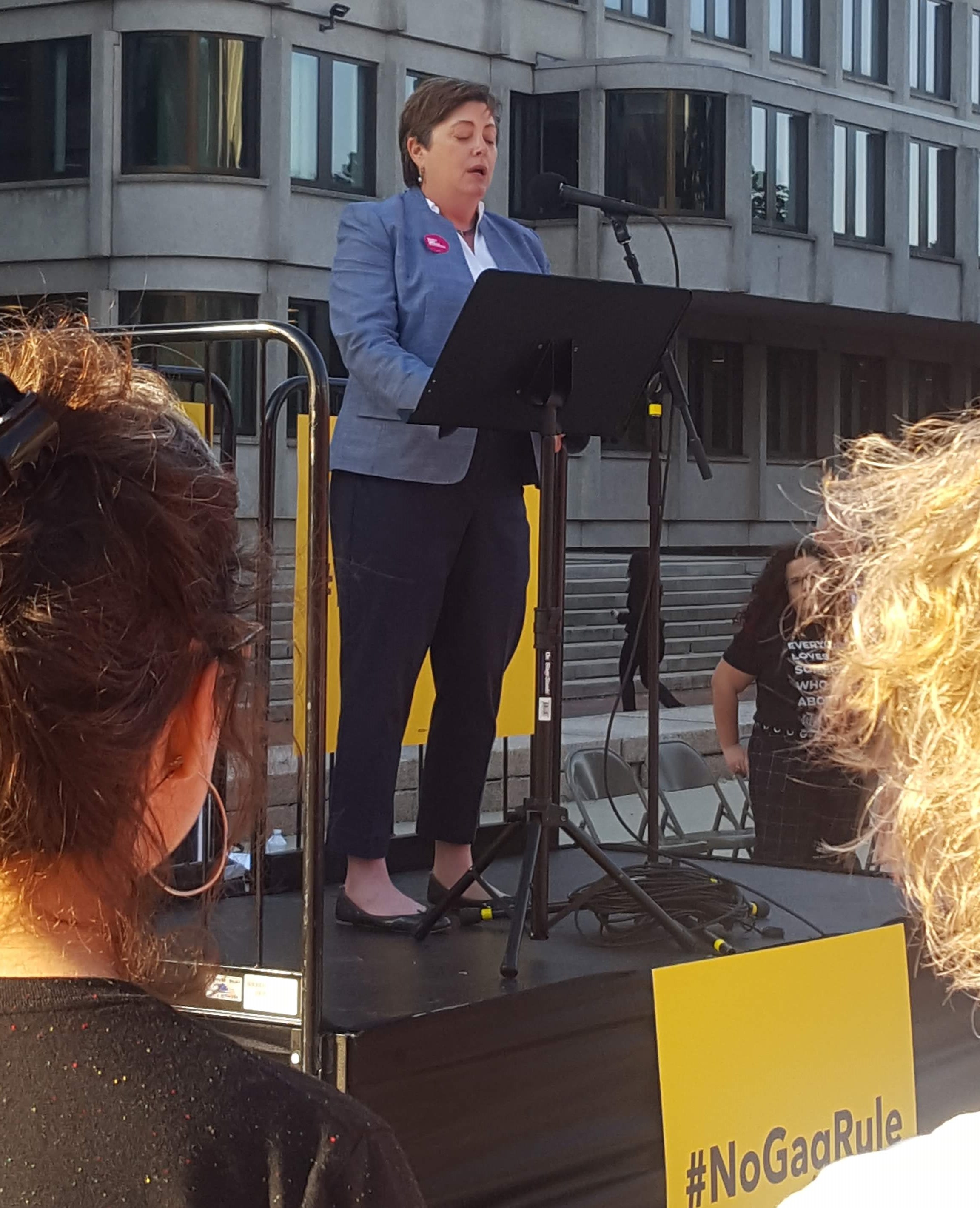 Boston City Hall Plaza was a sea of pink on Tuesday, May 24, where protesters gathered outside the regional office of the U.S. Department of Health and Human Services to speak out against President Trump’s proposed domestic gag rule. The rule, submitted last week, takes direct aim at Planned Parenthood and other reproductive health organizations that receive federal funding through Title X.

“I’m mostly worried, because this attack on Title X really cuts to the core for people who are low income, people of color, LGBTQ youth. There’s a lot of young people who wouldn’t get birth control or STI testing without Title X,” Dr. Jennifer Childs-Roshak, President of the Planned Parenthood Advocacy Fund of Massachusetts and CEO of Planned Parenthood League of Massachusetts, told Spare Change News during the rally. “The other thing that’s really important, especially as a physician, is you don’t want to be told what to tell your patients.”

The Trump administration’s new rule would require facilities receiving federal family planning funds to be physically and financially separate from those that perform abortion procedures and bars federal funds for any group that makes abortion referrals. Federal funding for abortions is prohibited in most cases under current federal law, but this is the latest attempt by anti-abortion advocates and conservative lawmakers to “defund” these family planning clinics.

The federal family planning program, Title X, became law in 1970 and serves more than 4 million women and men across the nation. Those health centers– with Planned Parenthood health centers making up about 13 percent of Title X providers– provide services including pregnancy testing, contraceptive counseling, cancer screening, infertility services, health education and referrals for other health services. Over 66,000 people received services at a Title X provider in Massachusetts in 2016 with 60 percent of patients having income at or below the poverty line.

“I am outraged, because this is outrageous,” Boston City Councilor Ayanna Pressley said to the crowd. She was joined by Councilor Lydia Edwards, Congressman Michael Capuano, Congressman Seth Moulton, as well as patients, activists and doctors. The rally was organized by the Planned Parenthood Advocacy Fund of Massachusetts, which works to increase and preserve access to sexual and reproductive health services in the state.

“They have tried time and time again to stop patients from coming to Planned Parenthood but let’s be clear, this never has been just about health care. This is about eliminating women’s rights. A women’s access to abortion and reproductive health care is the gateway to her economic freedom and they know that,” Councilor Pressley said to the group.

A similar rule was proposed under President Ronald Reagan, which prohibited organizations that received Title X dollars from even mentioning abortion.

“If you’re telling physicians and telling clinicians that they can’t talk to patients about things, that’s a gag rule. If there are rules about what information patience can get or not get, that’s a gag rule,” Dr. Jennifer Childs-Roshak said.

Leading anti-abortion organizations, such as the Susan B. Anthony List and Students For Life of America, and Republican legislators have expressed support for the proposed rule. States like Mississippi and Iowa have also enacted laws severely restricting access to abortion services.

“It is transparent that the purpose [of this rule] is not to reduce abortion because we know what reduces abortion, which is investing in free access to birth control and comprehensive sex education,” said Jaclyn Friedman, sex educator, activist and author of “Unscrewed.” “I think it’s incredibly alarming, to put any service provider whether it’s Planned Parenthood or anyone else in the position of deciding whether to give competent medical care and lose funding, and there be able to serve way fewer people, or basically withhold- sometimes life saving- information from people who are right in front of you.”

Friedman encouraged the attendees to be “sex voters” during her speech at the rally and urged people to call their local representatives and legislators.

Last year, President Trump signed legislation to nullify an Obama-era rule that barred state and local governments from withholding federal funding for family planning services regardless of whether they also performed abortions. The administration has also reinstated “the global gag-rule,” which bans family planning clinics around the world that receive aid from the U.S. from performing abortions or discussing abortion with patients, having detrimental consequences for women and other forms of health care in developing nations.