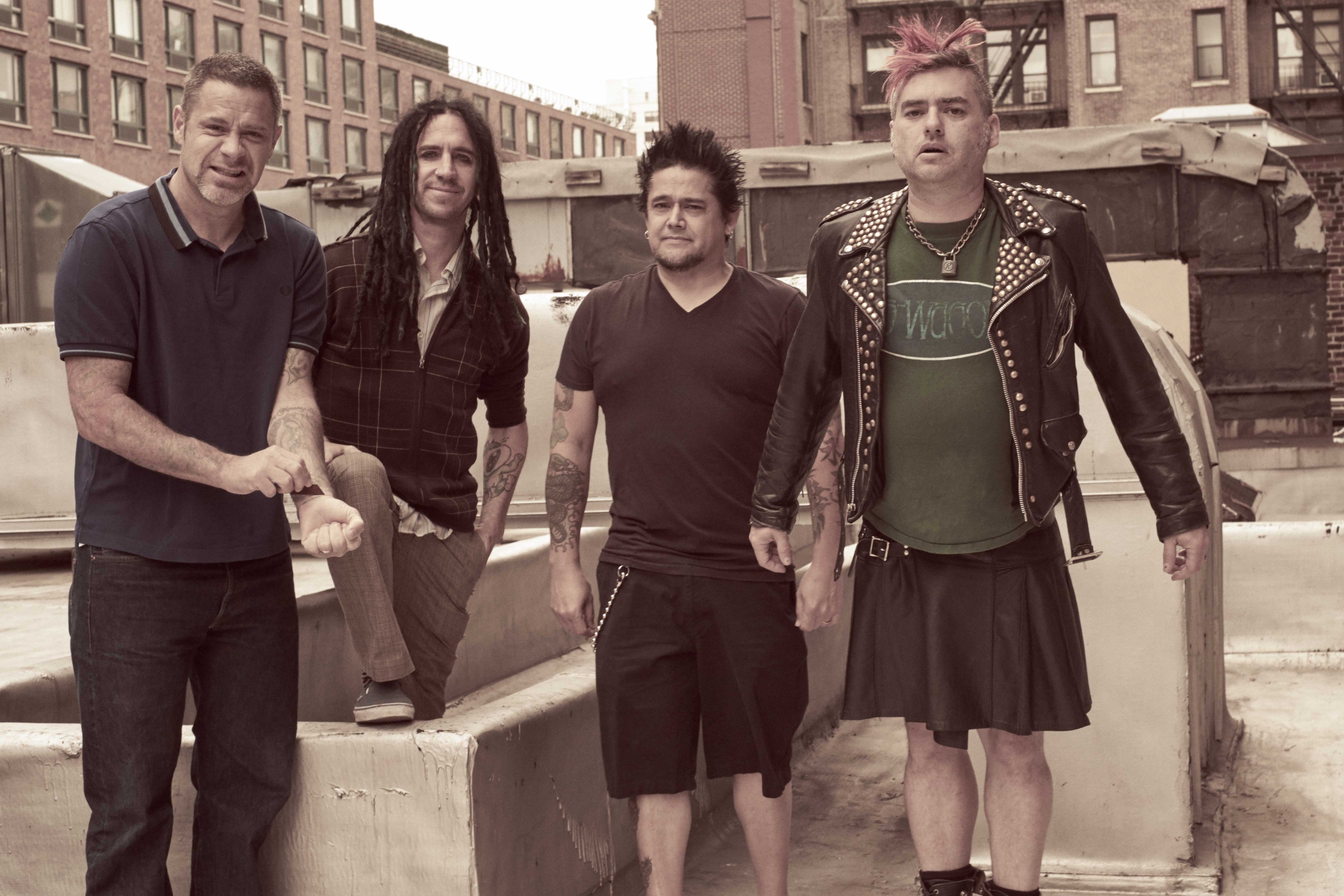 “I sing about all these things because it leads back to my belief that people should be able to do whatever they want, as long as it isn’t hurting anybody, or hurting someone that doesn’t want to be hurt, I should say,” said Fat Mike, born Mike Burkett. “That’s why I’m so open about my sexuality and my drug use because it isn’t hurting anyone. Why put your religion and morals on me, when I’m the one who is giving money to a homeless person, ya know?”

Indeed, the Newton native has lived by his own rules throughout his career as the frontman of legendary California punk lifers NOFX. Burkett says he serves as the “the walking billboard” for the idea that “you should do whatever the hell you want, just as long as you don’t hurt anyone else.”

He’ll bring that attitude with him when the Punk in Drublic festival, named after the classic 1994 NOFX album, sets up shop at Brockton’s Campanelli Stadium on Saturday, May 19. The lineup, which was originally pitched to be a slate of 21 bands, is comprised of NOFX, political punk titans Bad Religion, and new-age punk standouts The Interrupters, and Bad Cop Bad Cop, among others. At first, Fat Mike wasn’t totally on board with the festival, but when organizers managed to book Bad Religion and others, he was all in.“Free beer, great bands, and they’re all weekend shows in April and May, when it’s nice out. It’s definitely a show that I would want to see. It’s that simple!” he said.

The Brockton venue is perfect for an outdoor festival, he also said. “We just wanted to have it be at a nice place to hang out, and not be indoors all day. We want to create a full experience for people, not just a show.”

Burkett wouldn’t consider Boston his home city—he hasn’t been a Massachusetts resident since he was four-years-old — but he’s quick to acknowledge the influence the Hub’s early hardcore punk pioneers had on him growing up in California, with bands like The FU’s, Impact Unit, and SSD standing out. The FU’s even crashed at his home once when he was 16!

“I wouldn’t consider this Brockton show a homecoming, but I have a lot of good friends in the city, like the Dropkick Murphys who have always been good friends of mine,” he said. “Massachusetts is weird, because it’s liberal, but it’s old school, and working class. Really nuts and bolts, but still liberal.”

Maybe it’s because of the way they carry themselves on stage, with belching and witty banter filling the gaps between songs like “Johnny Appleseed” and “72 Hookers,” but NOFX has been long regarded by critics as a joke band, said Burkett. However, Burkett, who produced the protest compilation collection Rock Against Bush, also said the quartet has been covering their fair share of political and social topics since their conception.

“I sing about politics in a way that’s artistic, like the song ‘USA-Holes’. We are a political band, and punk rock itself has always been political, since the Sex Pistols,” he said.

Since 2004, Burkett has worked to convince the punk community of the importance of voting, and had worked to mobilize voters in the punk scene by founding the now-defunct punkvoter.com during the 2004 Presidential election. But since the years of George W. Bush, Burkett has become worn down by the inconsistencies displayed in the electronic voting systems used in US elections, as well as the complacency and overall arrogance displayed by left-wing voters in the 2016 election.

“We were all happy as hell that Trump got the nomination because there’s no way a sexist, racist, homophobic psychopath was going to win. But not as many democrats voted because they all felt that she had him beat. Every other country uses paper ballots because you can actually check them. You can’t fact check an electronic machine. So why should I spend another two years of my life fighting for something that’s rigged? I did my public service, I did my two years.”

Just because he’s worn out from his past efforts doesn’t mean he won’t fan the political flame when he has the chance to do so. In May of 2017, while at Punk Rock Bowling, an annual punk music festival in Las Vegas, a baseball bat-wielding Burkett took the head off of a statue of Donald Trump, and while he had already vowed not to apologize for the statement, he was relieved when Kathy Griffin released a photo of her holding a bloodied mannequin head resembling Trump that very same day. But his relief quickly turned to frustration, due to Griffin’s willingness to apologize for her own stunt.

While he recollects how easy it was to change the mind of a Bush supporter, Burkett admits that he’s dealing with a whole new kind of monster when going up against the mentality of a Trump supporter.

“If you still voted for him after he was on that bus, talking about grabbing women, then you’re just such an asshole,” he said. “If people still say they’re supporters, it’s just their ego talking. It’s either that, or they’re actually okay with him because  of the fact that they’re also wanting to walk around grabbing women themselves. Either way, you can’t talk those people out of it, because they’re unreasonable people. I have no advice for this one. We just have to wait this one through until he completely destroys himself.”