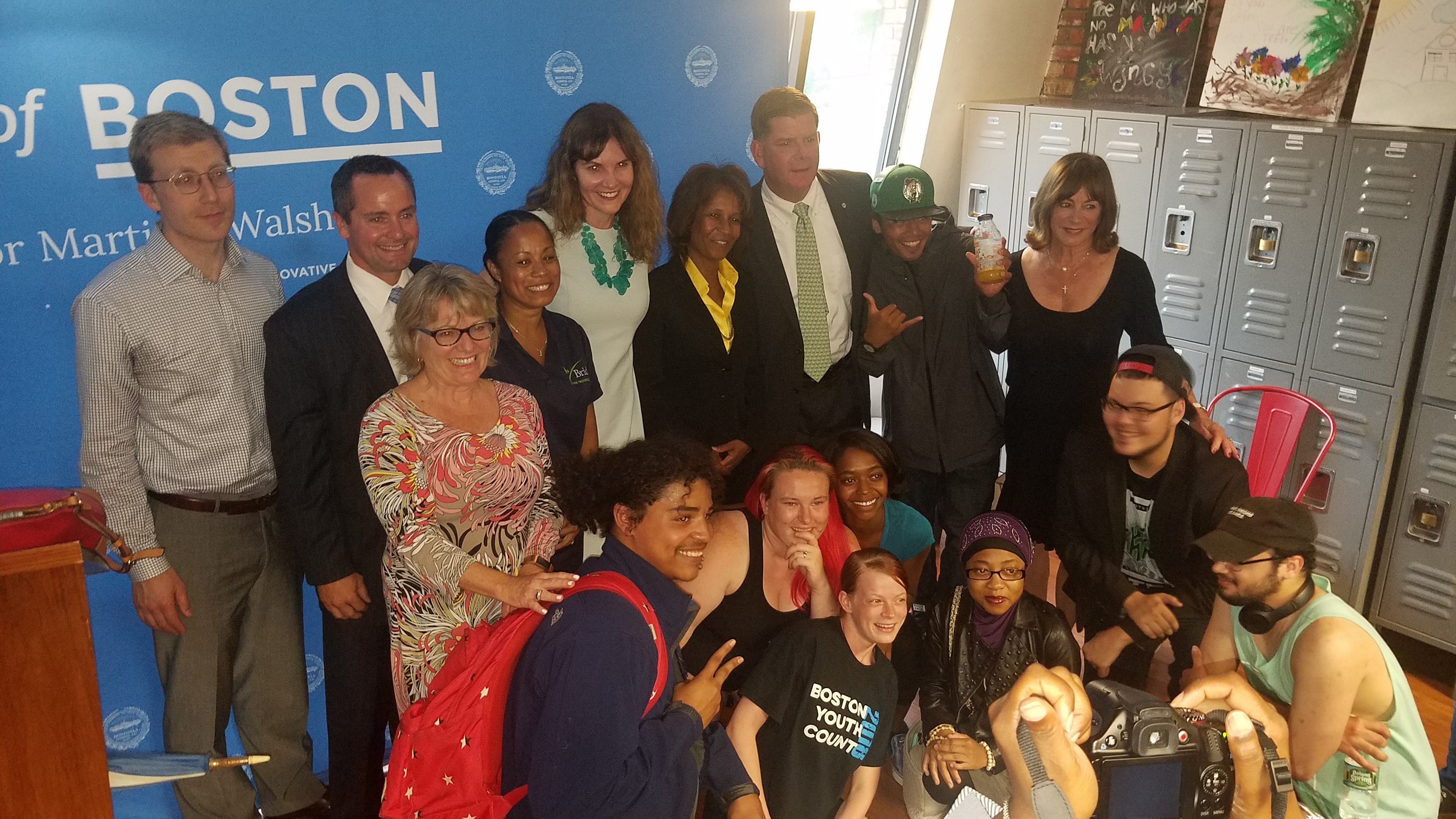 Mayor Walsh poses with members of the Bridge Over Troubled Waters community. Photo by author.

On Tuesday, July 17, the US Department of Housing and Urban Development announced that Boston will be one of 11 communities to receive a part of a $43 million dollar grant to help end youth homelessness. The announcement was made by HUD’s deputy assistant secretary for special needs Jemine Bryon.

“Today, we further commit ourselves to develop and sustain a system of care that offers real solutions to young people, ending their homelessness, or better yet, preventing it from occurring in the first place,” stated Secretary Byron.

The city of Boston, which will receive $4.9 million dollars, will now be tasked to work with a youth consulting team and local agencies, and are required to present HUD with a overall community plan in the next four months. However, the city is not starting from scratch.

On February 14th of this year, the Mayor’s Office published a release announcing the creation of a team that would be tasked with building a plan to end youth homelessness, led by former HUD member Matthew Aronson. Before this, the city had also formed the Youth Homelessness Leadership Team and the Youth Action Board (YAB) to address this problem, and the Walsh administration had already announced its commitment to ending chronic individual and veteran homelessness through the “Boston’s Way Home” program. In 2016, the mayor announced the city had functionally ended veteran homelessness.

The announcement was made in the small rec room facing the Common at Bridge Over Troubled Waters, an organization dedicated to providing resources to the city’s homeless youth. In attendance were organizers and activists, ecstatic young people, the press, and Mayor Marty Walsh.

“On any given night, there are over 360 kids that are in the streets or in shelters in Boston, more people living in unsafe and unacceptable living conditions,” stated Mayor Walsh to attendees. “That’s just not acceptable.”

Mayor Walsh also thanked the organizers, volunteers, and young people that had helped to bring the grant to Boston.

“This is not an easy award to get, you don’t just apply and all of sudden the money is there. What you do is have to work together and [show] the importance of how we want to tackle this issue,” continued the Mayor.

However, the most notable speech of the afternoon came from Stephanie Ford, a organizer who has been dealing with homelessness herself  for the past 10 years. Nearly a year and half ago, Ford became active with the YAB, though she was skeptical at first.

“When [YAB] first came, they talked about being homeless, and how we’re gonna stop it,” recalled Ford. “This has been a problem forever, how are you going to stop it?”

However, Ford stated that in that past 18 months, the organization has helped her and other young homeless people regain hope.

“When someone steps forward and says, ‘Hi, my name is Stephanie, I’ve been homeless’, that becomes a bigger issue, because I’m no longer an idea, I am a person.”

“For a while, I didn’t believe in the system, I didn’t believe in Boston Housing,” continued Ford. “How did I slip through the cracks? What happened? Who wasn’t talking to me? Who wasn’t hearing me? But now everyone hears me, and every person hears every person they walk by. We’re no longer silent about the problem, this isn’t silent issue anymore. This is in your face.”