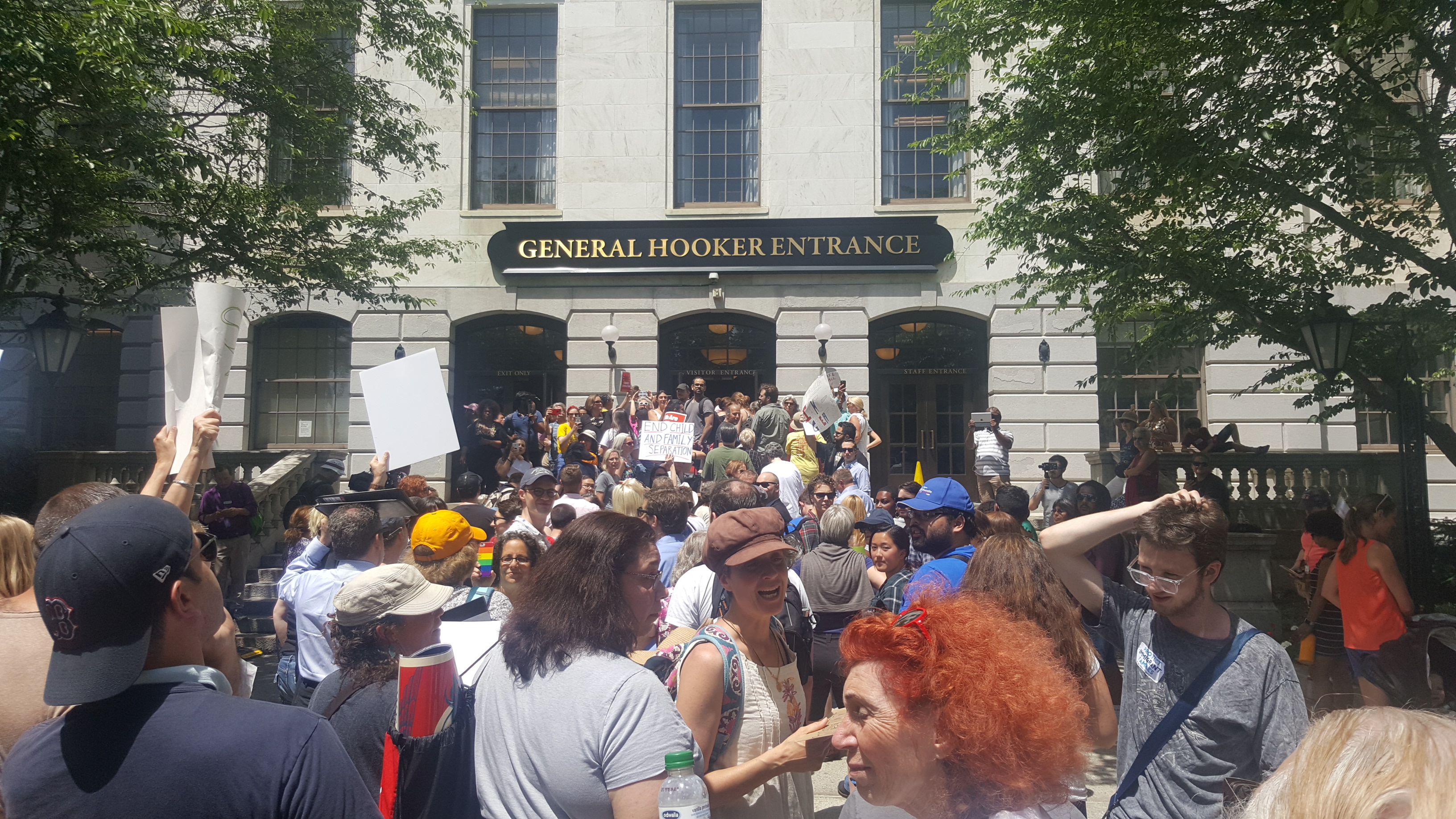 Hundreds of protesters gathered at the Massachusetts State House on Wednesday, June 20, to speak out against the Trump administration’s “zero tolerance” immigration policy that detains those trying to cross the border and separates parents from their children. The protesters — joined by groups such as the ACLU and the Massachusetts Immigrant and Refugee Advocacy Coalition — also denounced Massachusetts  for presently taking no action to protect undocumented immigrants within their jurisdiction.

The mass of people rallied at the State House’s front steps, donning hand-crafted signs with  phrases like “No Kids In Cages,” “Abolish ICE,” and “Stop Separating Families.” Several speakers addressed the crowd, urging  direct action to continue until both the Massachusetts and federal governments instill reforms.

“If we do nothing, we are complicit,” said Laura Rotolo, an attorney for the ACLU in Massachusetts. “We are using our state resources and local resources to feed this inhumane deportation.”

Dr. Rand Nashi of Boston Medical Center — the daughter of Iraqi immigrants — spoke on imperialist policies that led to the current crises in Latin America which force people to flee to the United States border. She also discussed the state of American politics, likening Trump’s immigration strategy to an immoral bartering dispute.

“Our politicians are playing games with children’s lives just to erect a wall that, in and of itself, is unethical,” Dr. Nashi said.

A powerful speech came from Eduardo Samaniego, and undocumented immigrant with an extensive history of immigrant rights activism.

“You don’t have to go to the border to see how mothers and fathers have been stripped away from their children. All you have to do is go to Northampton,” Samaniego said, referring to Lucio Perez, an undocumented Guatemalan immigrant who has been seeking refuge in the First Congregational Church of Amherst for months. Perez has been unable to see his children, since he has had to remain in the church to avoid deportation. The struggle for  Perez to remain in the country reminded Samaniego of the danger he too faces.

“When I go to take a class, I don’t know if I’m going to come back home,” Samaniego said to the crowd. “I pay taxes; I go to school here. And I can’t believe that one day, as I head out of my house… I may be deported.”

The crowd of protesters eventually flooded  the State House and took to the third floor, continuing the rally directly outside the office of Governor Charlie Baker. Chants of “Baker, where you at?” and “Governor Baker, Speaker of the House, we want you now,” echoed through the hall; the latter chant a reference to Speaker of the House Robert DeLeo’s blocking of a House vote to ensure undocumented immigrant protections.

As the protest began heating up , President Trump announced an executive order that would allegedly end his policy of child separation and detainment.  However, separated children have not yet been freed from the now infamous camps along the border. The country’s long-standing “zero tolerance” policy also remains at play, detaining anyone who makes an illegal border crossing. With this in mind, Eduardo Samaniego urges citizens to continue taking to the streets in protest.

“The most important thing right now is that [people] are coming out, and encouraging their families to come out to support immigrant families, no matter where they come from,” Samaniego said. “We’re all affected when immigrants are attacked.”