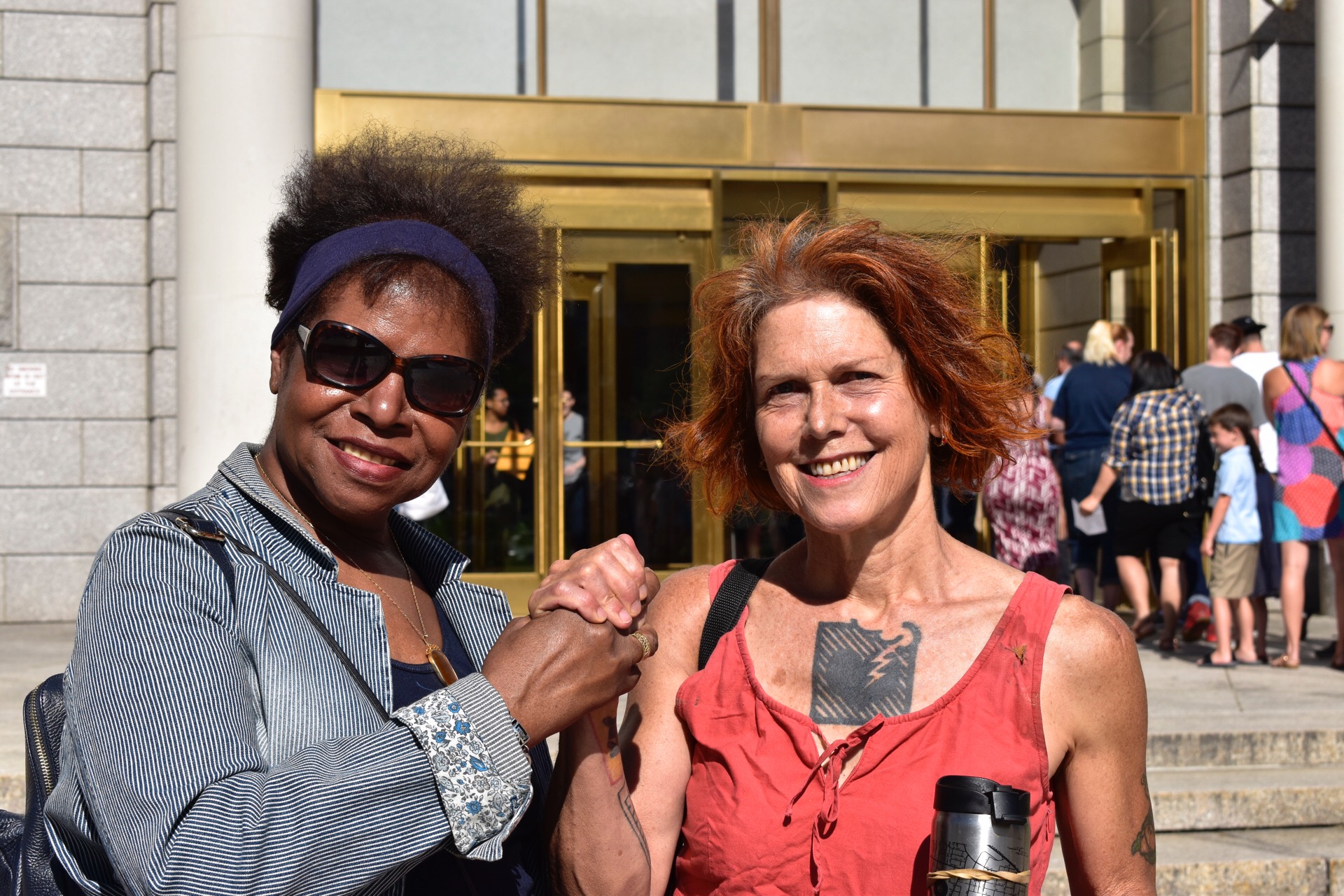 Before stepping foot in housing court on the morning of July 12, Lydia Eccles was given support by her neighbor and friend Judy Burnette along with members of City Life/Vida Urbana, who held a press conference in support of those living at 20 Charlesgate West in the Fenway area of Boston.

Our Lady’s Guild House is listed as the party evicting 20 or so residents from the 130-unit building owned by the Daughters of Mary of the Immaculate Conception. Most impacted are women 60-years of age or older. The building’s website until recently advertised its units to “women between the ages of 18 and 50,” but since has removed the ages from its website entirely.

Eccles claims that evictions are happening in order to make room for Airbnb customers and younger adults with disposable income.

“I’m very appreciative to City Life, to the Fenway CDC and to Judy Burnette, who was the first person who said let’s make a fight about this and not be pushed out,” 64-year-old Eccles said, adding that her lease was up two months before her housemates.

Our Lady’s Guild House, where Burnette and Eccles live, is historically known as single room occupancy transitional housing for low-income, elderly woman who are not married.

Eccles, an artist who was homeless for a time, said she is having trouble finding a single room at a market rate price and sees her age as a barrier to living anywhere with roommates.

“I made an effort every single day,” Eccles said. “I searched Craigslist for something that was incomparable to what I’m paying at the single room occupancy… I didn’t think about it much … there’s apartments for rent but there are no single rooms … what do you do when you’re too old to go on Craigslist anymore?”

Eccles’s eviction-fight is just the beginning of many more to come.

Burnette said once her neighbors received a notice on March 7 that their leases would not be renewed, she marched to City Life/Vida Urbana the next day to ask for some guidance. She knew this fight was coming sooner or later.

She has been having trouble getting other neighbors besides Eccles on board to fight their evictions. Together they have released a letter addressed to the Daughters of Mary of the Immaculate Conception demanding that all tenants get to renew their leases.

Marc Roos Realty is also listed in the letter, but when reached denied knowing anything about this eviction.

Helen “Homefries” Matthews, communications coordinator for City Life/Vida Urbana, said that is part of the issue.

“Right now it sounds like multiple parties are tossing the ball saying they don’t have anything to do with this building or the evictions,” she said. “But [the ball] has to land somewhere.”

“A lot of the ladies are Catholic and they feel that if they go against this – even though it’s to their best interest – that they’re going to go against the church,” Burnette said. “I don’t know if they believe in fairy Godmothers or what, but they don’t seem to understand that [eviction] is going to happen.”

“Literally if you walk through that apartment building every single old woman who is my age or older who I see is being forced to leave, meanwhile they’re showing the room to young people and they’re renting to Airbnb on the ground floor,” Eccles said.

She and Burnette plan to make noise about this while the eviction deadline of July 31 looms over most of their housemates.

“We’re just trying to get the ladies who are there to at least say we agree with Judy and Lydia,” Burnette said. “[Displacement is] happening all over, and that’s going to continue to happen until people stand up and say, ‘Damn it, I’ve had it,’ so that’s what Judy and I are doing.”