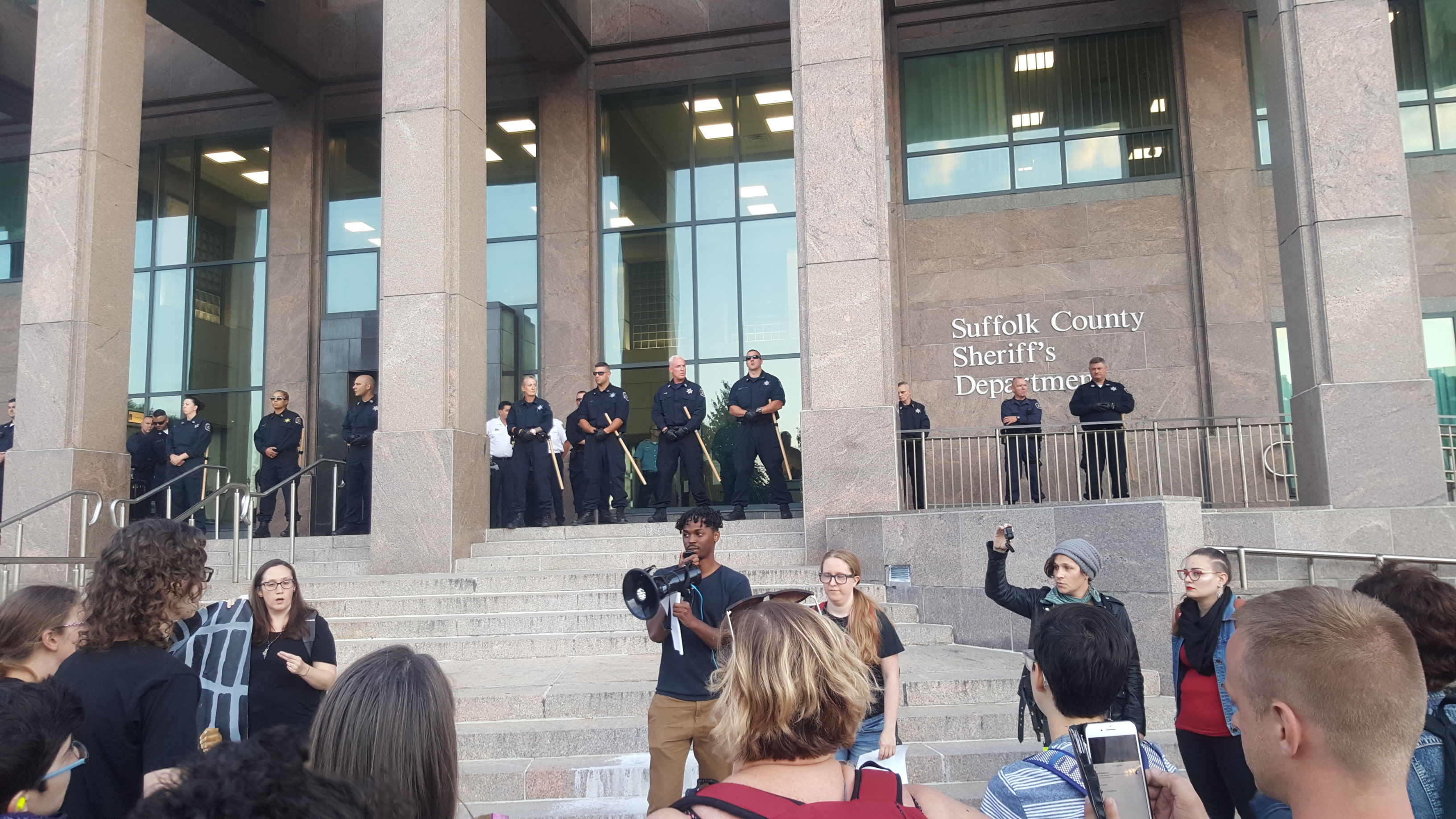 About 150 people rallied outside of Suffolk County Jail Thursday, Aug. 23 to stand in solidarity with a nationwide prison strike which kicked off earlier in the week.

As police stood on the jailhouse steps, batons at the ready, protesters chanted, sang, and donned signs. The prison reformists and abolitionists called for the Massachusetts Department of Corrections to meet the strike’s demands and for a boycott on companies profiting off of prison labor.

On Tuesday, August 21 — the 187th anniversary of Nat Turner’s famous slave rebellion — the United States prison strike officially began in at least 17 states. The action comes just months after a riot in a South Carolina prison which left seven prisoners dead, which many argue is largely due to correctional officer inaction.

This strike also acts as a follow up to 2016’s national prison strike, which lasted three months with the objective of bringing more public awareness to the controversial issue of prisons paying incarcerated workers mere cents a day — or, in some states, nothing at all.

Activists, like the ones found at the Suffolk County Jail rally, and prisoners alike say that this is a form of slavery.

The no-to-little pay, shoddy conditions, and illusion of choice aren’t the only things modern prisons have in common with slavery; United States law puts it on paper.

“It is modern day slavery; we can see that illustrated in our constitution’s Thirteenth Amendment,” said strike organizer Amani Sawari in an interview with WBUR. “Most are making less than two dollars a day for ten hours of work.”

Sawari references the Thirteenth Amendment, which states that slavery in the country is abolished,  “except as a punishment for crime.”

The incarcerated strikers are demanding an improvement of prison conditions, an end to gang enhancement laws (which gives gang members more extreme sentences), an end to prison slave labor, an end to sentences of life without parole, and more voting rights.

A full list of their demands can be found online. Massachusetts prisoners in particular are pushing for an end to solitary confinement, which has been used liberally as a method to silence those trying to improve conditions or speak with the media.

Several speakers addressed the activists outside Suffolk County Jail, representing different groups and factions supporting the strike. Doris — a member of the Harvard TPS Coalition, a union activist, and an immigrant — was one such speaker.

“Incarcerated people are workers like me, but they’re working for Fortune 500 companies for cents a day,” she said.

“The most abusive men in the system are the ones that rise to the top,” said Timothy Muise, who was recently released after 19 years in prison. “You don’t know what it’s like to spend a year of your life in a cage, out an hour a day, depending upon a guy who wants to spit in your food to feed you.”

The crowd also heard from several strikers still behind bars. Wayland Coleman, an activist for the Deeper Than Water coalition who has been dealt several punishments from his guards for advocating water justice in Massachusetts prisons, addressed the protesters via phone call.

“Today we are setting an example… we must fight dehumanization,” Coleman said. He urged those outside of prison to continue supporting the strike and do what they can to help; he also spoke on the dangers of solitary confinement. “It would be considered an act of animal cruelty to lock a dog in the same blistering hot cell that they caged me in with no way to cool off for 23 hours a day.”

Other groups present at the rally include the Boston branches of the Democratic Socialists of America, the Industrial Workers of the World, the National Lawyers Guild, and Boston Liberation Health.

The strike is set to officially end on September 9, on the 47th anniversary of the Attica prison uprising.