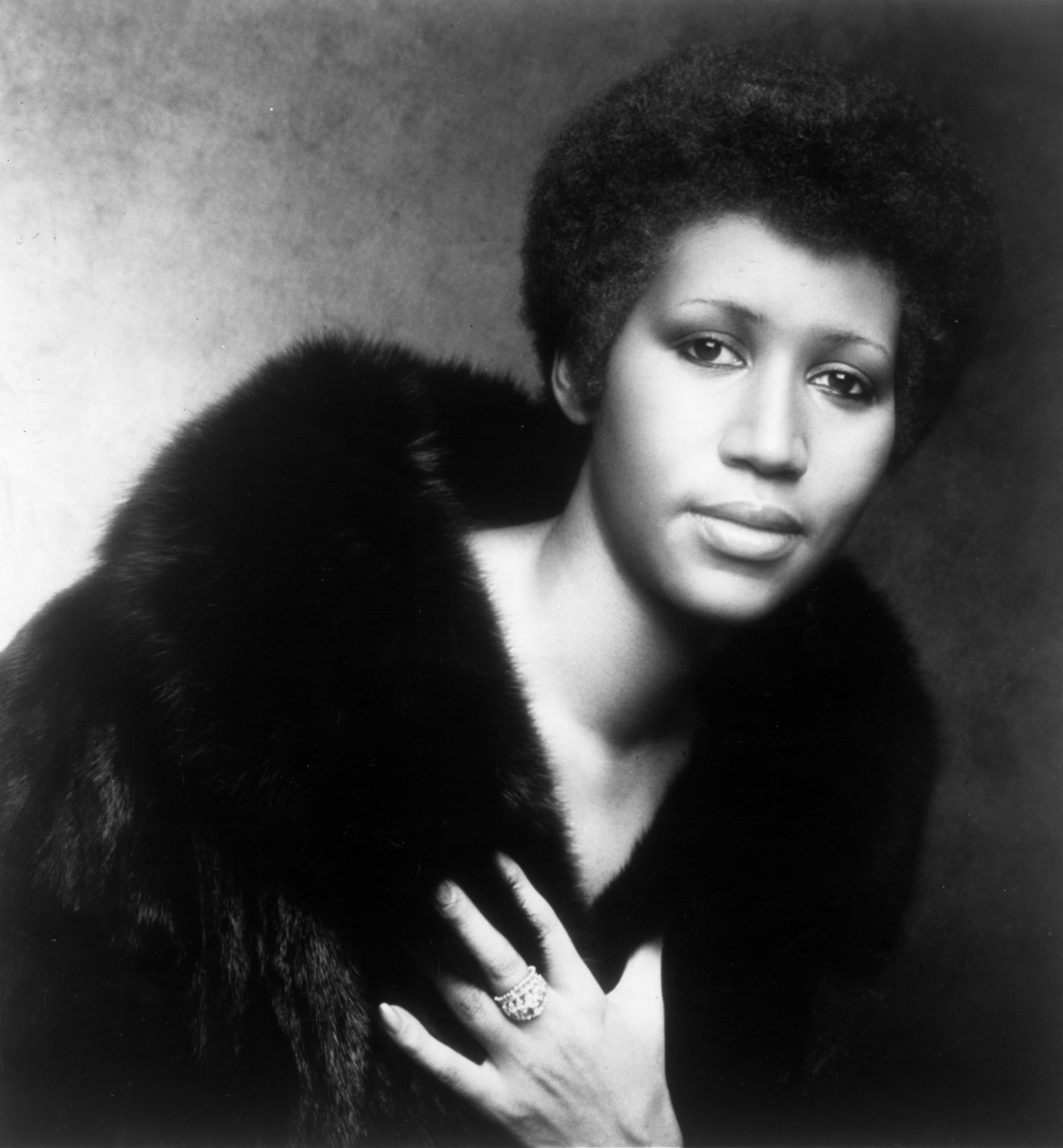 “All I’m askin’ for, is a little respect,” sings Aretha Franklin in what would become her signature tune. But by dint of her swaggering, sweltering, church-wrought performance, she’s not just asking for respect: she’s demanding it. And she got it, on an unparalleled level, winning 18 Grammys, a lifetime achievement award and being the first woman inducted into the Rock and Roll Hall of Fame.

The undisputed “Queen of Soul” radiated strength and solidarity while wowing us with pure emotional fire and often daring reinventions of the songs she sang.

She changed some of the lyrics to the above Otis Redding song, ‘Respect’, to reflect a woman’s perspective, and it wound up as a lasting anthem of empowerment for not just women and people of colour, but anyone fighting for equality. She even added the “sock it to me” refrain to send her 1967 version home with a punch, and it topped both the pop and R’n’B charts.

When Franklin died at home in Detroit on 16 August at the age of 76, following a battle with advanced pancreatic cancer, tributes poured in from around the world. Presidents, pop stars, actors and millions of fans united in their celebration of this most unbeatable of singers, who never stopped inspiring us.

As a black woman getting her commercial breakthrough against the backdrop of the American civil rights movement – she sang at Martin Luther King Jr’s funeral in 1968 – Franklin cut records in the eye of a historic storm. Her music brought the intensity and spontaneity of gospel to the compact catchiness of secular soul, without losing that world-wise profundity. Franklin’s string of classic albums in the late 60s remains staggering to this day – to say nothing of the highlights to follow.

You can hear her direct impact on superstars such as Adele, Mariah, Beyoncé, Whitney and Celine. When Rolling Stone named her the best singer of all time in 2010, Mary J Blige wrote, “She is the reason why women want to sing.”

Of course, she inspired everyone. Singing another of her signatures, ‘You Make Me Feel Like (A Natural Woman)’, at the Kennedy Center in 2015, she brought Barack Obama to tears. The performance, which is on YouTube, sees her start out at the piano before building to an emotional peak that demands she get up, walk to centre stage and belt out the song’s grand finale, earning one of the most deserving standing ovations of her entire
seven-decade career.

Born in Memphis, Tennessee, in 1942, Franklin sang as a child in the Detroit church where her father Clarence was a preacher. She taught herself piano, and received vocal guidance in part from gospel icon Mahalia Jackson. Her father began managing her from a young age, taking her to perform at churches on his lauded “gospel caravan” tours – he once said that Aretha was so talented she would one day sing for kings and queens. Franklin became a mother when she wasn’t yet 13 years old, and went on to have four sons in total. She married her first husband, Theodore “Ted” White, when she was 19, and had her third son with him, but after a tumultuous marriage that was dogged by reports of domestic violence, divorced him eight years later.

Franklin released a number of religious albums in the 50s – her first, Songs of Faith, when she was 14. But when she turned 18 she moved to New York to pursue a commercial career, inspired by a crush on Sam Cooke.

Originally marketed as a jazz-leaning singer by Columbia Records, she didn’t cross over into a wider commercial audience until she signed to Atlantic Records and switched to soul music, recording in the South with the best backing players.

Thus, it wasn’t until her 11th album, 1967’s I Never Loved a Man the Way I Love You, which opens with ‘Respect’, that she truly earned just that. Even today, while commonly called the best singer of all time, she’s not often credited for her skills as a pianist and songwriter. She played piano on many of her albums, whether live or in the studio, and her playing is a defining feature of 1970’s masterful, elegiac Spirit in the Dark. That’s her laying down the earthy piano foundation for ‘Think’, and in recent years she still played the instrument live, including on her version of Sam Cooke’s ‘Send Me’.

As for her songwriting, much of the strongest work in her catalogue issued from her own pen. That ranges from the celestially funky ‘Day Dreaming’ and the bluesy lament ‘Dr Feelgood’ to the rhythmic body-mover ‘Rock Steady’ and the celebratory gospel-licked ballad ‘Spirit in the Dark’. For someone so famous for her bravura cover versions – she casually recast multiple Beatles and Stones hits as grandiose soul anthems – she was one hell of a songwriter.

Likewise, we often think of Franklin in primarily one mode, as the force-of-nature singer who brought the fervour of gospel to popular music in songs like ‘Respect’, ‘Think’ and ‘Natural Woman’. But that was just one piece of her long career, which spanned and survived an enormous stretch of styles and trends.

Her soundtrack to the 1976 film Sparkle, produced by Curtis Mayfield, let her luxuriate over funk and R’n’B both psychedelic and orchestral (google ‘I Get High’). Franklin scored fun, flashy 80s hits with ‘Freeway of Love’ and ‘Who’s Zoomin’ Who?’, and collaborated with Eurythmics and George Michael during the same era. She even tried disco with 1979’s La Diva, though it was a flop. But she came full circle with her 2014 version of Adele’s ‘Rolling in the Deep’, turning it into a strutting, full-throated disco flashback, complete with gospel-style back-up singers and a seamless detour into ‘Ain’t No Mountain High Enough’.

That Adele cover came alongside other thrilling tributes on Aretha Franklin Sings the Great Diva Classics, including a jazzy reinvention of ‘Nothing Compares 2 U’ produced by OutKast’s André 3000 and a bass-tickled, dance-driven version of ‘I Will Survive’ that triumphantly dovetails into Destiny’s Child’s ‘Survivor’. In less than five minutes, she nails frank spoken-word, playful scatting and, of course, the full-bodied emotional outpouring that she helped to popularise a half-century before.

Franklin’s vast catalogue is generous with just such unexpected, revelatory moments. One of her very best songs, 1968’s smoldering ‘Ain’t No Way’, penned by her younger sister Carolyn, is most devastating for the way she renders the phrase “How can I?” three times in a row with growing desperation. For a singer with access to such power, Franklin never abuses it: those stormy peaks are hard-earned, and she’s just as powerful when working at a sustained simmer, as on the slow-burn 1967 ballad ‘Do Right Woman, Do Right Man’.

Her most enduring hits are so ingrained in our collective consciousness that we take them for granted. But to listen to them with fresh ears is to be blown away all over again, often by something you didn’t catch the first time. Or maybe by something that’s gotten to you every time – for me, it’s the knowing, tender way that she phrases the line “I didn’t know just what was wrong with me” from ‘Natural Woman’, before the stirring culmination to follow.

You can hear her gospel roots in everything she sang, from the reverent way she intones the word “Lord” on ‘Natural Woman’, to the rollicking vocal celebration of ‘Think’, which taps a lifetime’s worth of confidence in less than 140 seconds. She returned to gospel material many times over her career, most memorably on the 1972 live album Amazing Grace. One of her best albums, not to mention the single best-selling gospel album of all time, it features an incredible seven-minute rendition of Marvin Gaye’s ‘Wholy Holy’ backed by a proper church choir. And her version of ‘How I Got Over’ is a joyous burst of resilience and devotion.

Amazing Grace isn’t the only evidence of Franklin’s domination in the live setting. There are countless live videos of her on YouTube, but to get the best picture, listen to her 1971 album Live at Fillmore West, recorded in San Francisco. It opens with a much accelerated version of ‘Respect’, turning it into a party-starting rave-up, and later she reprises the gospel-rock fusion of ‘Spirit in the Dark’ with Ray Charles, making for a wild, funky, crowd-pleasing release.

Apart from her albums, Franklin lives on in television and movies. Her scene-stealing cameo in The Blues Brothers – performing ‘Think’ as a strong-willed waitress – is a stone-cold classic that’s being prolifically shared online in the wake of her passing, while Franklin’s songs inspired both the creation and execution of the hit sitcom Murphy Brown. Candice Bergen’s title character even sings ‘Natural Woman’ to her newborn son in 1992, and Franklin made a sweet, funny cameo singing and playing the song at the piano next to Bergen.

And beyond the countless cover versions of songs that she made famous, Franklin’s voice rules over hip-hop samples, laying the groundwork for songs by Jay-Z, Kanye West, OutKast, Public Enemy, Fugees and more. Clive Davis, who signed Franklin to Arista Records at the turn of the 80s, is reportedly planning an all-star concert in tribute to her later this year at Madison Square Garden. Before her death, Franklin had been working on an album with Stevie Wonder acting as producer, which will hopefully see the light of day in some form.

From the seismic upheavals of the 50s and 60s to the lasting struggles and triumphs of women and African Americans since, Franklin presided over tumultuous times – and not least of all at the time of her death. The world feels more divided than ever, which only makes it that much more powerful when a single voice can drown out the chaos and make us feel human again.

On her version of Elton John’s ‘Border Song (Holy Moses)’, which closes 1972’s majestic album Young, Gifted and Black, the song finishes with her usual piano finesse and the powerful final posing of the question, “I wonder, can we, can we, can we live in peace?”, placing unmistakable emphasis on the “we”.

Nearly 50 years later, we’re still left wondering. But a voice and heart as mighty as Franklin’s at least offers hope.