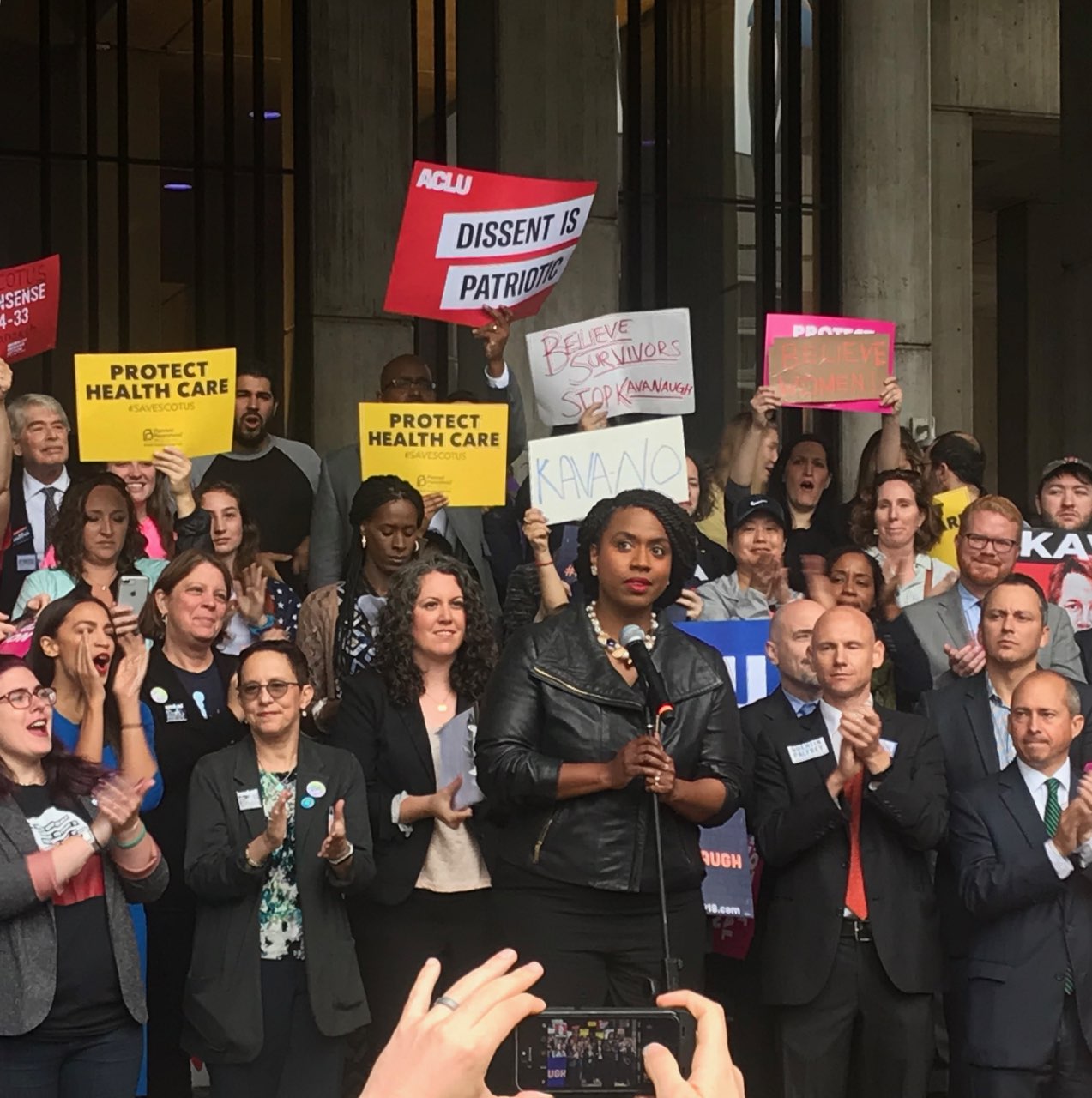 City councilor and congressional nominee Ayanna Pressley speaks at a rally against the nomination of Brett Kavanaugh on Monday. Photo: Kiera Murray.

The week leading up to Brett Kavanaugh’s confirmation to the Supreme Court of the United States started and ended with rallies protesting his appointment. On Monday, Oct. 1 hundreds of people gathered on City Hall Plaza next to a Forbes 30 Under 30 event at which Senator Jeff Flake was scheduled to speak.

Flake had called to delay the vote until a week-long FBI investigation of Kavanaugh was complete, and the rally was organized to urge Flake to reject the judge for the position.

The rally was hosted by the National Association of Social Workers Massachusetts Chapter along with over a dozen other organizations including Planned Parenthood Advocacy Fund of Massachusetts, NARAL Pro-Choice Massachusetts, ACLU of Massachusetts and Mass Alliance. Boston government officials spoke out against Kavanaugh, stated reasons he should not be appointed to the Supreme Court, and denounced his alleged crimes against Dr. Christine Blasey Ford.

“His lack of credibility was surpassed only by his lack of judicial temperament,” said Senator Ed Markey, referring to Kavanaugh’s behavior during last week’s hearings. “Brett Kavanaugh is not entitled to a job on the Supreme Court, no one is entitled to a job on the Supreme Court, but the American people are always entitled to know the truth about who is.” He then commended Ford for coming forward to tell her story, stating she “has given new meaning to what it means to be a good citizen.”

Governor Charlie Baker was not present at the event, but stated on Friday that he did not believe Kavanaugh should be on the Supreme Court.

Representatives from other organizations, as well as survivors of sexual assault who volunteered their personal stories, stated that Kavanaugh’s appointment would result in threats to women’s rights and safety. Executive director of Jane Doe Inc. Debra Robbin said that recent events have caused survivors to relive their past traumas, and many are speaking about them for the first time. “We are hearing from rape crisis centers here and elsewhere that there has been as much as a 200% increase in calls in the last several days,” she said.

Many speakers stated that Boston is a city of firsts in a state of firsts that has lead the country in civil and social movements before. They wanted the rally to represent the city’s revolution against sexism, sexual violence and victim-blaming, in hopes that other parts of the country will follow.

“Last week as survivors told their stories, there were men in positions of power, of privilege and prestige who described those proceedings as a disgrace to our nation, when the real disgrace is a tolerant rape culture,” said city councilor Ayanna Pressley, who is also the Democratic nominee for the seventh district . “A culture tolerant of sexual violence, that has used rape and sexual violence as a tool of oppression, as a weapon of war. And we have been complicit in our silence.”

By Friday evening events signaled that the senate would likely confirm Kavanaugh on Saturday. Flake stated that he would vote yes, as well as senators Susan Collins and Joe Manchin.

Socialist Alternative and other groups, including some of those present at Monday’s rally, responded to the imminent confirmation with a protest in front of the Massachusetts State House followed by a march to the Boston Municipal Court Department late Friday night. Speakers focused on post-confirmation efforts, encouraging attendees to continue participating in protests and grassroots events against the judicial and political landscape Kavanaugh’s confirmation would bring.

“Even if tomorrow comes down with a yes appointment,” said organizer Keely Mullen, “the women’s movement, the movement against sexism, racism, transphobia, homophobia and inequality is beginning in Boston.”

The Senate confirmed Kavanaugh with a vote of 50-to-48 on Saturday afternoon. Protesters briefly disrupted the vote with shouts of “I will not consent” from within the gallery.