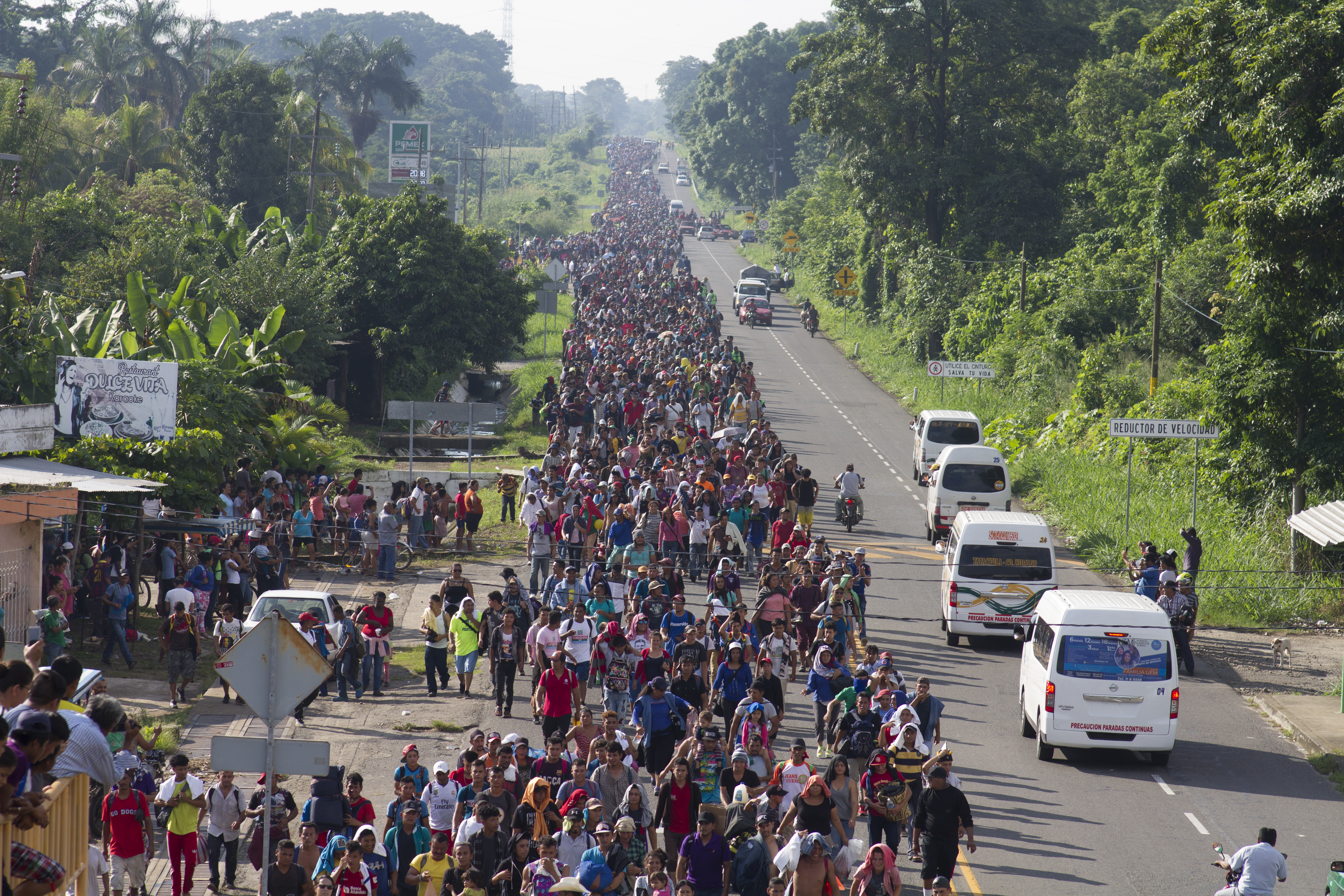 A line of more than five kilometres of migrants walked on Sunday, Oct 21, from Ciudad Hidalgo to Tapachula, 40 kilometers inside the state of Chiapas, in southern Mexico. There are 2,000 kilometres left to the U.S.-Mexico border, along a route that is partly controlled by organised crime groups. Credit: Javier García/IPS.

A long chain of people is winding its way along the highways of Chiapas, the southernmost Mexican state. It is moving fast, despite the fact that one-third of its ranks are made up of children, and it has managed to avoid the multiple obstacles that the governments of Honduras, Guatemala and now Mexico, under pressure from the United States, have thrown up in a vain effort to stop it.

Every attempt to make it shrink seems to have the opposite effect. And on Monday 22 October, some 7,000 Central Americans, most of them Hondurans, kept walking northward, in defiance of U.S. President Donald Trump’s warning to do everything possible to “stop the onslaught of illegal aliens from crossing” the U.S.-Mexico border.

The caravan that set out from San Pedro Sula, in northern Honduras, in the early hours of Oct. 13, has put the migration policy of the entire region in check. Trump took it up as the campaign theme for the mid-term elections, and via Twitter, threatened Honduras with immediate withdrawal of any financial aid.

“People have to apply for asylum in Mexico first and if they fail to do that, the U.S. will turn them away,” Trump tweeted.

The caravan isn’t stopping. In nine days it has traveled a little more than 700 kilometers to reach Tapachula, a city of 300,000 inhabitants, close to the border, which has welcomed the migrants’ arrival with food, beverages and encouraging messages.

Groups of activists and human rights defenders are preparing to meet them in different parts of the country. “This is not a caravan, it’s an exodus,” say migrant advocates.

There is still a long road ahead, however. The migrants still have 2,000 kilometers to go before reaching the nearest Mexican-U.S. border crossing, in an area governed by criminal groups, which have made migrant smuggling one of the country’s most lucrative businesses.

In addition, the Mexican government has threatened to detain them if they leave Chiapas, where local legislation allows them to be in transit with few requirements because it is a border zone.

But none of this has prevented new groups of migrants from arriving every day to join the caravan.

The number of children in the arms of their parents is striking, as they walk kilometer after kilometer, cross rivers and border barriers, or wait for hours in crowded, unsanitary conditions, in suffocating temperatures.

The stories they tell are heartbreaking.

“We don’t have a job, we don’t have medicine, we have nothing in our country, we can’t even afford to eat properly. I want to get to the United States to raise my children,” said Ramón Rodríguez, a man from San Pedro Sula who arrived with his whole family to the Guatemalan-Mexican border on 17 October, in tears.

In the last decade, human rights organisations and journalists have documented the massive displacement of Central Americans toward the southern border of Mexico, and have repeatedly warned of a humanitarian crisis that is being ignored.

In May 2017, Médecins Sans Frontières presented the report “Forced to Flee Central America’s Northern Triangle: A Neglected Humanitarian Crisis”, in which it warned of an exodus, caused above all by criminal violence in the region.

The Mesoamerican Migrant Movement, which has organised 14 caravans of mothers of migrants who have disappeared in Mexican territory, has also described the situation in the Northern Triangle as a “humanitarian tragedy”.

The violence, along with precarious labour and economic conditions, skyrocketed a few days ago when the government of Juan Orlando Hernandez announced hikes in the electricity rates.

According to versions given by Hondurans who arrived in Mexico, it was Bartolo Fuentes, a pastor and former legislator who has participated in several caravans in Mexico, who launched the call for a collective march to the United States.

They were to gather in the Great Metropolitan Central bus station in San Pedro Sula. Around one thousand people showed up.

“Many of us thought that in a group it was easier and safer, because we know that going through Mexico is dangerous,” said a member of the caravan, who asked for anonymity. “Later, messages began to arrive through Whatsapp (the instant messaging network), and people began to organise to flee the country,” he said.

By 15 October, another group had organised in Choluteca, in southern Honduras, and yet another in Tegucigalpa.

The Honduran government tried to close the border crossings, but was unable to stop some 3,000 people from leaving the country and crossing Guatemala. The detention and deportation of Pastor Fuentes did not stop them either. On 17 October, the caravan arrived in the city of Tecún Umán, on the border with Mexico.

The Mexican government had stepped up security at the border and the caravan was stranded on the bridge that joins the two countries. Desperation set in: on 19 October, the migrants crossed the police cordon and were dispersed with tear gas.

Faced with media pressure, the Mexican authorities offered “orderly passage” for groups of 30 to 40 people who were to take the steps to apply for refuge.

But it was actually a ruse, because the migrants were taken to an immigration station where they must stay 45 days, and have no guarantees of the regularization of their immigration status.

The border bridge became a refugee camp, without humanitarian assistance from either government. The only thing the Guatemalan government provided were buses for those who wanted to “voluntarily” return to their country.

Exhausted, many decided to turn around, the disappointment plain to see on their faces.

However, the bulk of the caravan made the decision to swim or raft across the Suchiate River.

For more than 24 hours, images of thousands of people crossing the river circled the world, while other groups of migrants continued to arrive at the border to join the caravan that today numbers more than 7,000 people, according to human rights groups.

Some activists believe that, because of its size and the form it has taken, this caravan could fundamentally change migratory movements in Central America, with people increasingly turning to a new strategy of migrating in huge groups.

“This is giving rise to something like a trail of ants, and we don’t know where it’s going to end,” said Quique Vidal Olascoaga, an activist with the organisation Voces Mesoamericanas. “We’re going to be seeing mass exoduses much more similar to those we see from Africa to Europe.”

With reporting by Rodrigo Soberanes and Angeles Mariscal, from various places in the state of Chiapas.