At a public hearing on Monday morning, U.S. Senators and Representatives from Massachusetts and New Hampshire tore into the executives from the gas company responsible for the fires and explosions that left thousands in the Merrimack Valley without heat for weeks and killed one Lawrence resident when an over-pressurized gas pipeline burst. Sen. Ed Markey, a member of the Senate Committee on Commerce, Science, and Transportation, held the hearing at the South Lawrence East Middle School gymnasium. He was joined by Sen. Elizabeth Warren, Reps. Niki Tsongas and Seth Moulton, incoming Rep. Lori Trahan, and New Hampshire Senator Maggie Hassan.

Markey led the charge by grilling Steve Bryant, president of Columbia Gas, and Joe Hamrock, the CEO of Nisource, the utility’s parent company. When asked if he should remain CEO, Hamrock said he was dedicated to the long-run and to making sure another disaster never happens again.

“I’m not sure that you should be allowed to continue to be the CEO of this company,”  said Sen. Markey. “I think it’s imperative that there be some price you should pay for what has happened.”

Sen.  Warren asked the executives if the gas incident has hurt their salaries. Bryant makes $550,00 and Hamrock earns $5 million. Hamrock said he recommended to the board that he not receive his annual bonus, which drew some chuckles in the crowd.

Markey made it clear that he seeks a more significant punishment than the usual $2 million fine for gas incidents — which he called a “parking ticket” compared to the estimated $800 million in damages.

Following the fires, which displaced thousands of families for roughly four days, many news local outlets dredged up the company’s history of gas incidents in Massachusetts and other states. A Boston law firm plans to file a negligent death lawsuit on behalf of the estate of Leonel Rondon, the 18-year-old who died in the incident, and environmental lawyers filed a class action suit against Columbia Gas.

Bryant and Hamrock accepted full responsibility for the disaster and apologized to the Rondon family, who was seated in the front row. The legislators also assembled a second panel featuring Lawrence Mayor Dan Rivera, business owner Tina Messina, and Andover Fire Marshall Michael Mansfield. Bryant and Hamrock left  before the second half of the hearing, but a representative of Columbia Gas employees and a few claims adjusters remained in the audience.

Mayor Rivera, a vocal critic of the utility’s negligence  on the night of the explosions, called for the company’s end, citing their mishandling of the pipelines and their spotty recovery efforts — like missing their Nov. 16 deadline to restore service to all customers. Lawrence evacuated the entire southern half of the city during the weekend of the gas incident. “Break that company apart. Columbia Gas should cease to exist,” said Rivera.

Mansfield said he disliked Columbia Gas’s usual protocol of not immediately reporting leaks — even those deemed hazardous — to the fire department until they had tried to repair it themselves.

Asked to grade Columbia Gas for their performance on the night of the gas incident, Rivera and Mansfield gave the utility an F, and Messina gave them a D. However, the panel did commend Columbia Gas’s later restoration efforts. Messina said they earned a B+ for their reimbursement efforts, so far having paid out $60 million in recover claims. Rivera gave Columbia Gas credit for repairing the pipelines by their November deadlines, but was unimpressed by their efforts to restore gas to all customers’ homes. As of the hearing, 80 percent of residences and 90 percent of businesses have their gas back, but this still leaves over 1,000 customers without service.

Columbia Gas spent the weeks after the gas fires supplying hot plates and even space heaters. They also helped pay for displaced tenants to stay in hotels. The utility set up recovery claims offices across from the Lawrence Public Library, which drew a line that wrapped around the block.

Legislators drew verbal commitments from Bryant and Hamrock to restore gas to all homes by Christmas and to make every family and business “100 percent financially whole.” In addition to testimony from experts and the community, the legislators were also interested in solutions. They pointed out that  lax regulations could stand in the way of preventing future disasters. Markey called Pipeline and Hazardous Materials Safety Administration (PHMSA) a “lapdog” and not a watchdog for the pipeline industry. Senator Hassan pressed Paul Roberti, chief counsel of PHMSA, noting that in 2016 the agency failed to implement one-third of its congressional mandates and recommendations, including eight mandates about pipeline safety.

Roberti said PHMSA leadership is working towards implementing those mandates, but that regulations and executive orders complicated the process.

The legislators often circled back to one key finding in the National Transportation Safety Board’s interim report of their ongoing investigation of the gas incident: there was no certified professional engineer on site to review the plans. In fact, in Massachusetts, projects don’t need the seal of approval from such license personnel. The NTSB’s report recommends the state adopt requirements that plans receive approval from qualified personnel.

The NTSB report also found an unlicensed employee approved the construction plans for the pipeline work that ended in catastrophe. Bryant admitted he was aware that uncertified employees often sign off on Columbia Gas plans and called the practice “somewhat standard in the industry.” Hamrock said the company has since committed to having certified professional engineers review plan — a policy the company abandoned four years ago, according to the NTSB.

Beaton noted that Gov. Charlie Baker filed legislation earlier this month that  requires gas work that could pose a threat to public safety to receive the approval of a certified professional engineer. Beaton’s testimony said the state was waiting for the full NTSB report — which could take 12 to 24 months — for other recommendations.

“If a gas distribution operation cannot incorporate such a technically advanced and relatively inexpensive computer tool into helping to improve pipeline safety, they should not be in the gas distribution business,” he said.

In addition to stricter regulations, legislators were vocal about enforcing a strict punishment on the gas company. Sen. Markey said the legislators plan to hold Columbia Gas and NiSource accountable and “make sure that there is a reckoning which NiSource and Columbia Gas will have to suffer as a result of your negligence.” 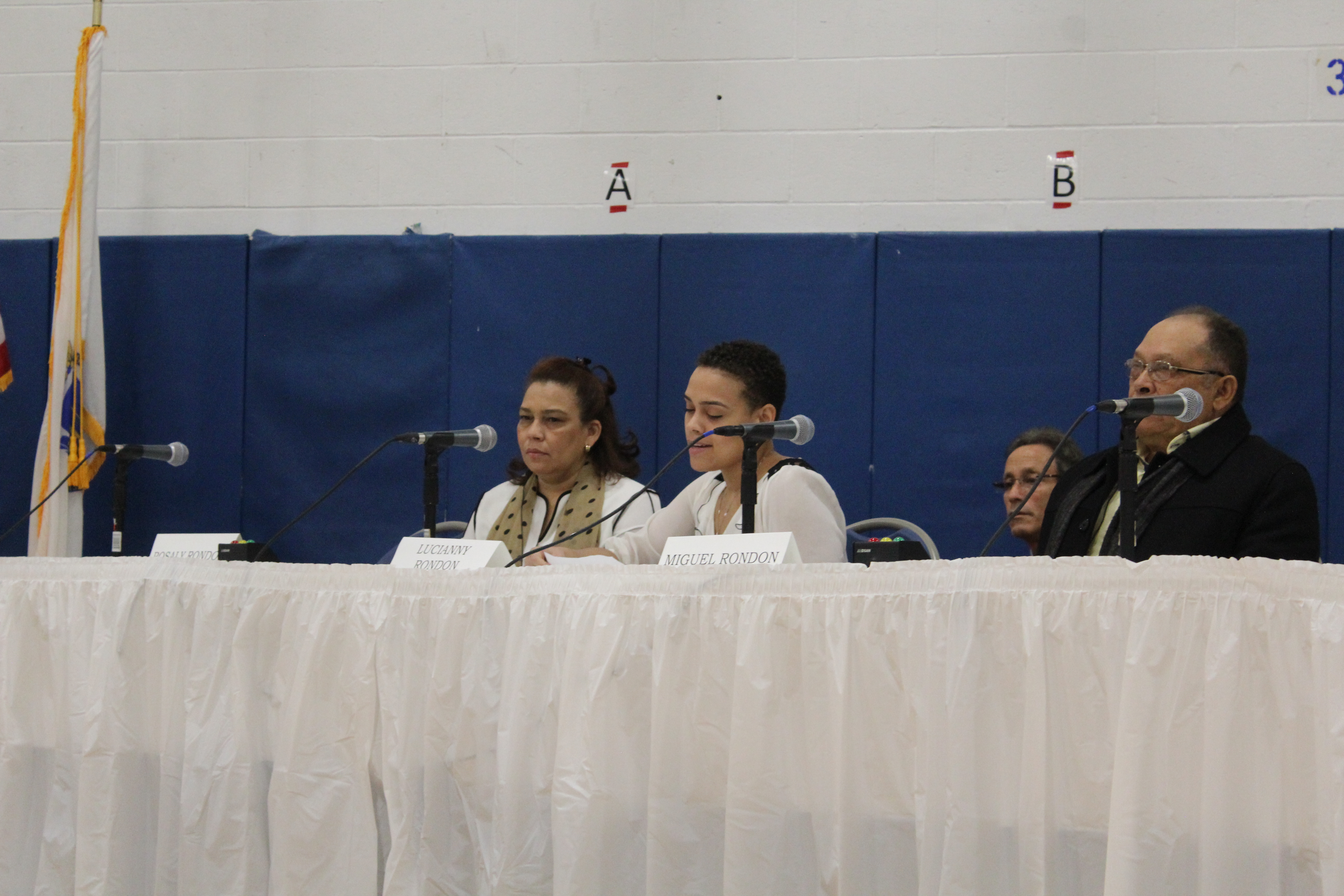 Lucianny Rondon, center, reads prepared remarks about her brother at the star of the hearing. She was joined by her parents for the emotional testimony, which received a standing ovation from the gymnasium full of people.

Lucianny Rondon,  whose brother Leonel Rondon was killed in the explosion, also spoke at the beginning of the hearing, flanked by her parents. “We hope there will be justice for him and the community. Nobody should ever have to go through what my family has gone through ever again,” she said, fighting through tears. At the end of her remarks, the family received a standing ovation.

Testimonies from those in the Merrimack Valley can still be submitted to the committee at www.markey.senate.gov/merrimack-valley-gas-explosions-share-your-story.