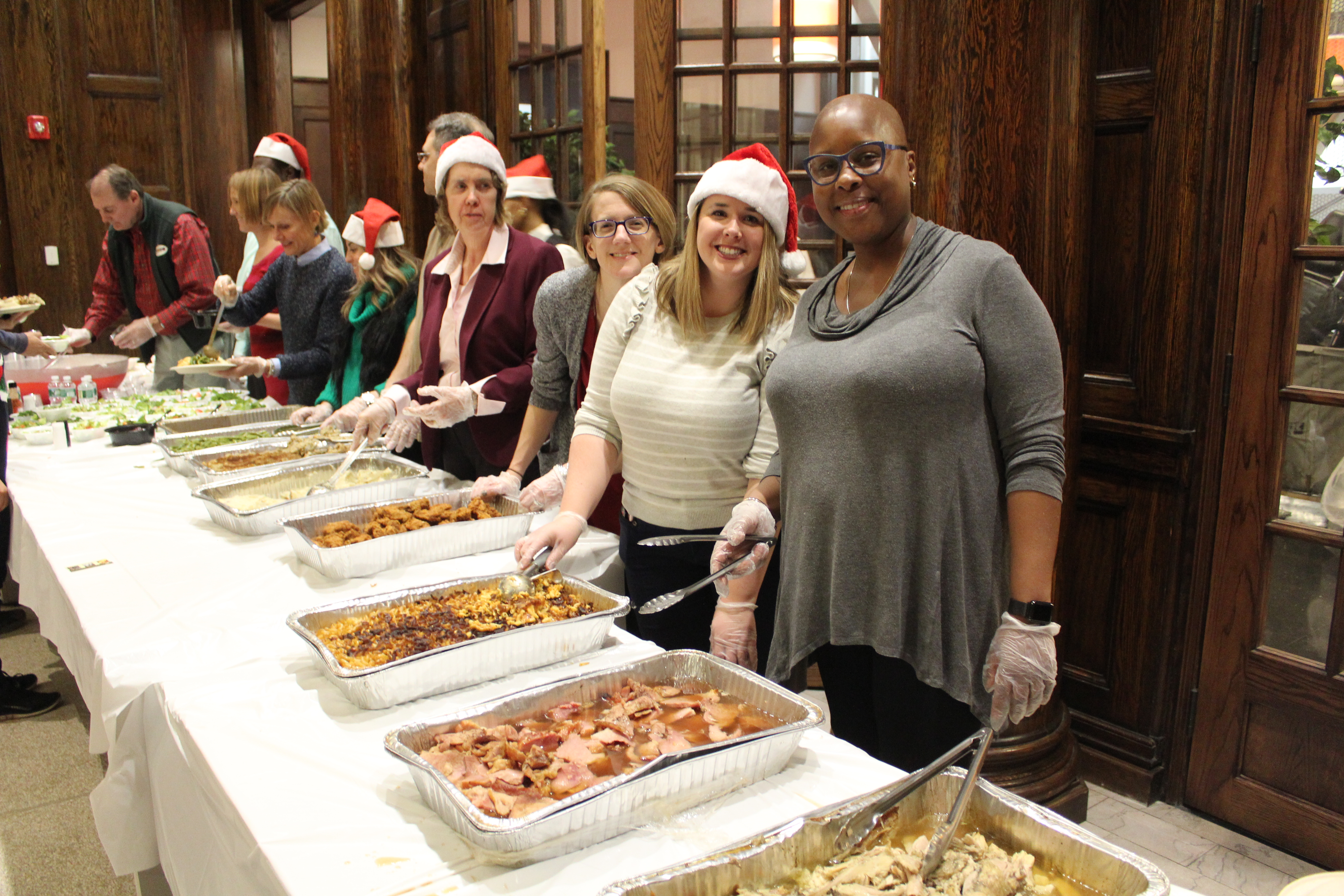 The staff of the Boston Business Journal helped serve food. Photo by author.

It’s Christmas time at the Huntington Avenue YMCA, which hosted its annual dinner on Thursday night for its housing program guests. Twelve round tables were spread throughout the dining room, sitting at them were parents with small kids and some older folks—a mix of staff and volunteers and participants of the program. A kickboxing class winds down in the room next door, its stepping-and-jabbing participants visible through the window, its pulsing music almost drowning out David Tavares’s speech. But when the YMCA’s director of housing told the kids in the room that “Santa’s gonna be here!” the applause overtook the bass.

Afterwards, some live piano and a few singers replace the workout mix, filling the room with Christmas standards as dinner guests filled their plates and mingled.

The YMCA has hosted the dinner for over 30 years. Originally a families-only event, it soon opened itself up to all guests,, though the kids still get a special visit from Santa and some presents. These kids will spend the night, and maybe Christmas, in their family’s quarters. Many more children around the state will spend Christmas in shelters, transitional homes, motels, or other places—over 7,600 in fact. These children are part of an increase in family homelessness in Massachusetts, as reported by the state.

“Shelter stays are much longer, people are becoming very discouraged,” said Tavares. “Even the most arduous of those who are performing housing searches. I guess they’re becoming dismayed that with all the housing that’s going up that not very much of it is affordable. It’s beyond their income level.”

Lorenis Liriano, the administrative assistant for the Families in Transition program, echoes the sentiment, saying spots in the housing program fill quickly.

“Once we get  a vacancy it’ll be offline for a day and we already get another family,” said Liriano, who once had to stay in a shelter herself. “The waitlist is crazy. The market rent is really high.” Even priority screenings for housing can take a long time, she added.

“There’s not a lot of affordable housing … that caters to our families,” she said.

A Spare Change News report in December found that most communities in the state fall short of 40B affordable housing goals, which calls for 10 percent of housing stock to be affordable for low- and middle-income residents.

The job hunt can make the housing struggle harder. Santa T., a single mother who has been in the program for over a year, has been looking for work, bringing her nine year old son to school, and applying for low-income and Section 8 housing. Santa said she feels good about the help she’s received at YMCA, calling it a good program that has helped her in many ways, but things are still difficult for the Florida transplant.

“I explain to my son that because we’re homeless it’s very difficult,” she said in Spanish. “He doesn’t understand.” In regards to the rise in homelessness, Santa said there aren’t enough jobs for people who want work, and people are homeless “because they can’t pay the rent.” “And, look, this is one of the states with the most support,” she added.

Another single mom, April, who is staying at the YMCA with her daughter, says the program is helping her get stable and independent. She came to the program after losing her job.

“It’s honestly a lot more than I kind of expected,” said April, who has been at the program for four months. “I came here expecting just to be able to find somewhere to stay, and they’ve just been awesome at providing me with other resources, as far as transportation, healthcare with my daughter, even little things as far as clothing. You know, the little necessities that you don’t always think about.”

As for the HUD report, she can’t believe the increase in homelessness numbers over the last year.

“That blows my mind,” she said, saying she never really associated homelessness with Massachusetts.

A more pleasant surprise was the YMCA’s dinner.

“It is amazing,” said April. “When you’re in a place like this you sort of get down on yourself … but it’s amazing to see people from all walks of life coming together and just celebrating the holidays, and for the kids ultimately, just to put a smile on their face.”

For the second year in a row, the staff of the Boston Business Journal served the food—a turkey dinner with the usual trimmings—and packaged and delivered gifts.

“This time of year we want to help members of our community and get out of our day to day life and help others,” said Michelle Laczkowski, sales manager of the paper. ‘Nothing gets you in the holiday spirit like making someone’s day … especially the kids, being able to make sure they have a present from Santa, that means a lot for us.”

There are 22 families at the Huntington YMCA and 10 more at a programs at Charlestown Yard. The YMCA also works with Huntington House, a program offering 66 single room occupancy unit and supportive services.

Tavares said the YMCA takes the stance that homelessness is not the “central problem” but a symptom of  issues like “intergenerational dysfunction, illiteracy, domestic violence, substance abuse.”

“We feel as though if we get you housing and we don’t deal with those issues which led us to the doorstep, or may serve as a prohibitor or barrier to get housing, then we haven’t done our job,” said Tavares.

Many families are from the Boston area and mostly arrive through referrals, said Liriano. She noted that mental health and immigration status can also present challenges to families seeking housing.

Aaron Donahue, Executive Director of the Huntington YMCA emphasized that whether numbers rise or fall, the team at the YMCA is focused on the clients that need their help.

“The trends are going to be what they are, and we’re able to, with the the team that we have here, impact the lives of people we encounter,” he said. “We don’t choose who comes to the shelter and the programs at the Y but we’re here to help everyone.”