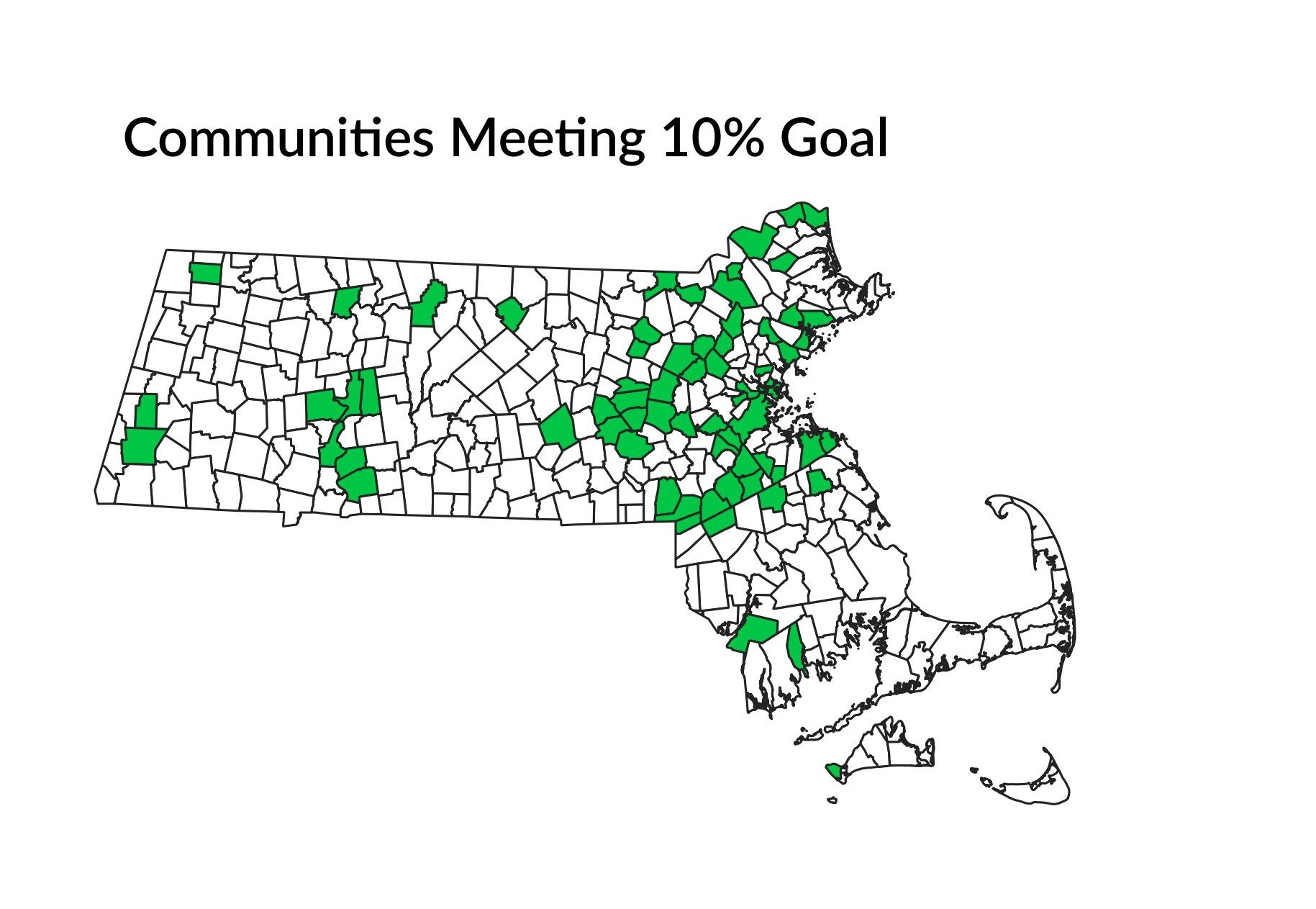 The Comprehensive Permit Act, usually called 40B, set a goal for Massachusetts towns and cities nearly five decades ago: develop at least 10 percent of local housing to be affordable in the long term for low or middle income residents. As of a late 2017 Department of Housing and Community Development report, just 67 of the state’s 351 municipalities currently meet that goal.

Despite the widely acknowledged housing crisis in the state, 40B has long been controversial for the methods through which it encourages new production. In communities falling short of the 10 percent mark, it allows developers to skirt local zoning regulations if 20-25 percent of their units are considered affordable based on area median income. If a project proposal is approved by a state or federal housing agency, developers can bring that application to local zoning boards to build more densely than otherwise allowed. Developers rejected by local officials can appeal to the state to overrule the decision, giving them unusual power over communities.

For city planning directors like Michael Zehner in Wellesley, whose affordable housing stock raised from 6.3 to 6.7 percent since the release of the DHCD report, this lack of control can make long-term planning challenging. In October his town took a step that have taken before to increase their say over their own development fate by releasing a state-approved five-year Housing Production Plan. So long as the Wellesley adds 0.5 percent to their affordable housing stock annually, their zoning board will have more power to turn away 40B proposals deemed unfit for the community. In reaching the 10 percent goal, the entirety of certain mixed-income developments counts toward an area’s affordable housing stock, so long as a large enough portion are rent restricted for low or middle income residents.

Zehner said increased communication with developers was helping to make 40B a friendlier process in his community. He said that historically the town would not learn of potential developments until they were being filed with state agencies.

“Up until at least May of this year, it was not a two way street,” Zehner said. “In many of those instances we lamented the lack of communication because the locations that were being selected were less than ideal given what was being proposed… We kept reiterating that we were open to having a dialogue with property owners and with the development community.”

The DHCD solicits data on regions’ affordable housing stock every two years, but the total housing stock against which that is measured is based on 2010 census data. Areas with significant development in the last decade could see their percentages drop after the 2020 census if their housing increase has not been affordable, possibly pushing some back below the goal.

A quick series of unexpected 40B proposals in 2017 led to the formation of Our Affordable Wellesley, a citizen group against what they call “hostile 40Bs.” Pete Buhler, a founding member and spokesperson, said the developments were concerning based on a combination of factors including congestion, environmental impact, shadows, and traffic that could pose safety risks for children.

“We wanted to play a role in helping the town reach its commitments,” Buhler said. “But we did not see the onslaught [of developments] strategically being put on the town all at once as a positive thing.”

In addition to publicly opposing the developments, Our Affordable Wellesley members were closely involved with the creation of the Housing Production Plan, seeing it as a way to protect their community. Despite a general support for the spirit and goals of 40B, Buhler said the act lent itself to abuse and corruption and that he would support its hypothetical repeal. A 2010 ballot initiative failed to repeal the law when 58 percent of voters opted to keep it.

SEB is a private consulting firm for developers which served as an advisor for all four of the 40B projects currently seeking approval from Wellesley. SEB Vice President Geoff Engler said they have worked in over 150 towns over decades and gotten more than 15,000 units of 40B housing permitted.

Engler doesn’t put much stock in local concerns over density.

“There’s zero excuse why towns have not been able to hit the minimum threshold of 10 percent,” he said. “I’m not particularly sympathetic to towns that complain about unwanted [40B developments] when 40B has been around 45 [sic] years and towns have had so long to be able to address affordable housing needs. Towns don’t do it and then they like to point a finger and blame 40B developers as the problem. Well you know what, town? You can take control of your own responsibilities.”

Engler claimed Wellesley wasn’t supportive of affordable housing and that reasons for opposition to 40B projects range from lack of understanding to fabrication of issues.

Paul McMorrow, director of communications and policy for MassHousing, an agency that grants initial approval and lends money for 40B developments, said many communities have expressed a desire to grow but a lack of resources to get there alone.

“The number one problem is not that there’s overwhelming anti-housing sentiment in every community,” he said. “We’ve made it too difficult to change and adapt.”

The perceived need for 40B is fueled in part by the relative difficulty of altering zoning laws in Massachusetts towns and cities, which requires a two thirds supermajority vote from a town meeting or city council. While the supermajority rule is not unique to the Bay State, it’s uncommon and a simple majority (over 50 percent) rule would loosen the grip of residents opposed to change.

Governor Charlie Baker’s administration introduced a bill last year that would allow a simple majority vote to change zoning in many instances, but with state legislature currently in its off season, the future of An Act to Promote Housing Choices is unclear.

This fall  Boston Mayor Marty Walsh updated his 2014 plan, “Housing a Changing City: Boston 2030,” to a goal of 69,000 new units citywide. A coalition of 14 mayors in the Greater Boston area released a plan pledging 185,000 units throughout the region, including Walsh’s commitment. At the time of the DHCD report Boston’ affordable housing sat at 19 percent.

Sheila Dillon, Boston’s Chief of Housing and Director of Neighborhood Development, expressed optimism at the promises of the mayors’ coalition.

“It’s going to be important that our housing production grows as a region,” she said. “It would be impossible for Boston to produce all the housing that the region needs, so we do need our cities and towns to produce more housing and we’re confident that the conversations that have started have been very productive.”