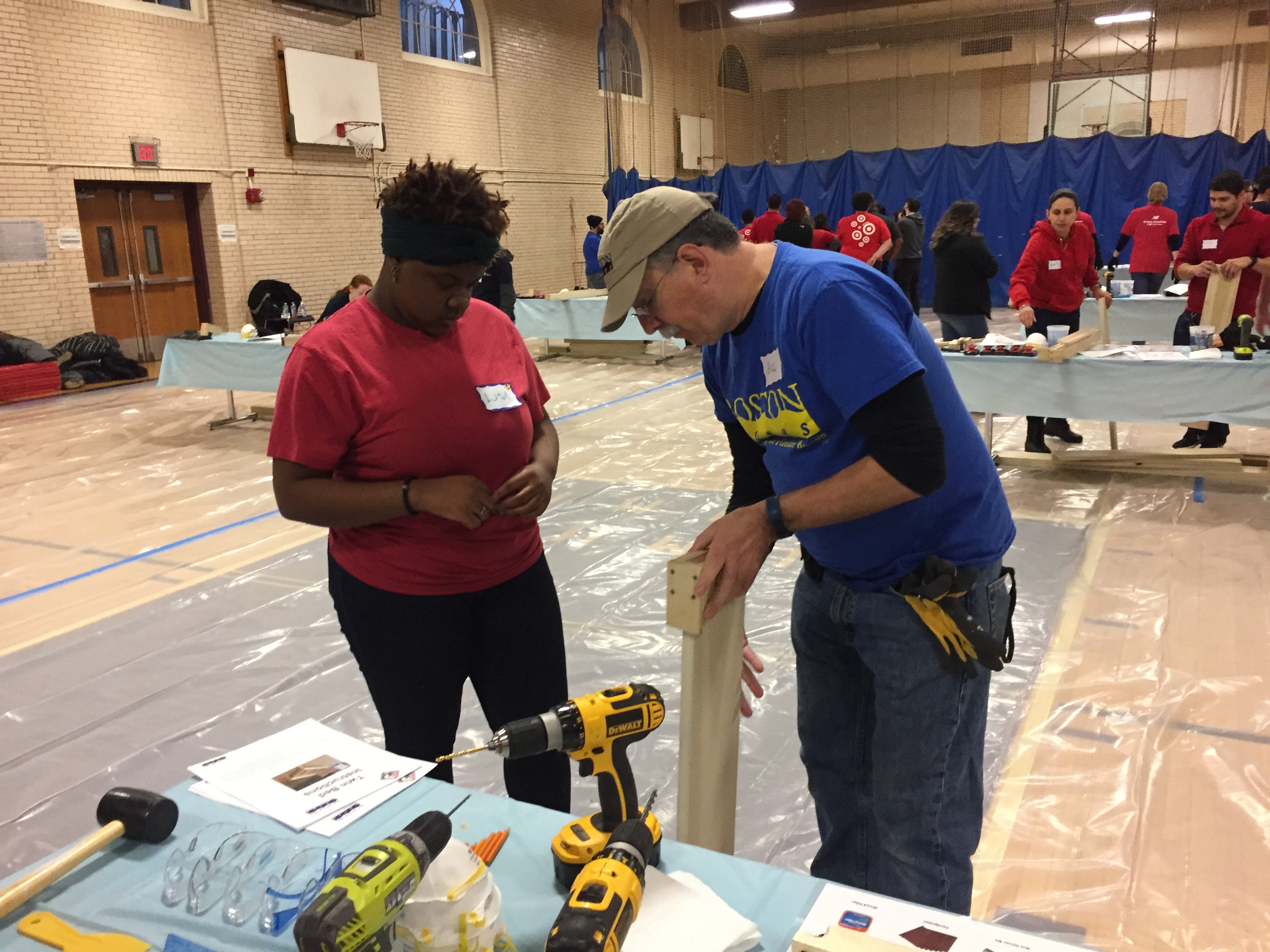 Hundreds came out in single digit weather to attend the 13th annual Boston Cares’ Martin Luther King Jr. Day of Service, held at the Boston Latin School for the third year in a row, on Monday, Jan. 21.

Among them were many news faces who took to various service programs throughout the school, which included building beds for homeless families and creating flashcards for English language learners and immigrants working towards citizenship.

Tig Eldred, a 54-year-old law professor from Roslindale, joined his family for the first time in this day of service.

“Giving back is always important,” Eldred said. “Today is an important day, we’re celebrating the life of Martin Luther King Jr., one of the most important peace activists of all time.”

Sam Baylow, a junior of St. John’s Preparatory School in Danvers, felt it was important for him to volunteer his time with a group of friends.

“the reason why it’s important is because it’s good giving back to a community, especially when it is not yours,” the 16-year-old from Marblehead said.

A few feet away from him were several people painting pre-drawn murals on canvases as Boston Cares volunteer lead Ethel Holtzclaw supervised.

Holtzclaw said some of the murals were designed by Latin students. All murals painted had positive and inspirational messages on them.

“The theme is “Together We Stand” and these murals will be put up around the school, which is great because the students can see the work that their other students have worked on,” Holtzclaw said.

In the basement of the building volunteers from the department store retailer Target helped build 14 beds for Household Goods, an independent non-for-profit organization in Acton that provides gently used household furnishings for free to individuals and families in need.

First-time Boston Cares’ MLK Day of Service volunteer Starr Guerrero, 17, of Lawrence said she heard about the service day from her boss at the Target store in Methuen.

“I thought that it was interesting that we’re building beds for homeless children, refugees and immigrants, that’s something I support,” the sales floor clothing representative said.
Boston Cares Associate Director of Corporate Engagement Kacey Sanfilippo said it was the fifth year for them making beds for the Household Goods organization, but the third year making twin size beds specifically.

“In the past we made toddler beds, but as we learned there was a stronger need in Boston for twin beds we began making them,” Sanfilippo said.

Boston Mayor Martin Walsh observed and partook in several projects throughout the day, but said bed making for homeless individuals transitioning into more stable housing was “a powerful” project.

“Every single project here has a uniqueness to it that sends a very positive message about hope and inspiration,” Walsh said. “When you think about it this is what community is all about, this is what Boston is all about. And to support Boston Cares, it’s an amazing way to start the year off, in a sense of service.”