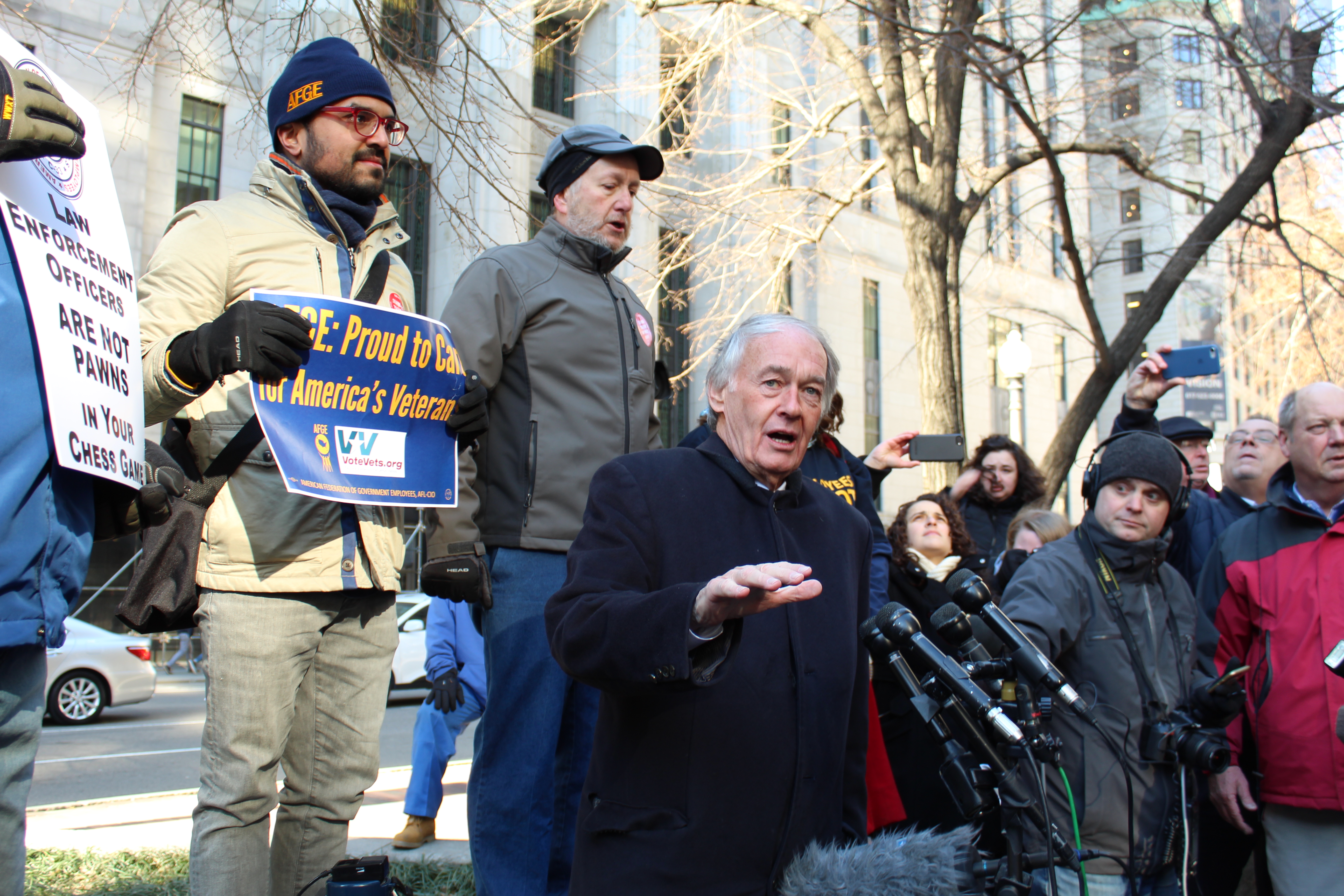 Senator Ed Markey gives a speech about standing with the people to end the shutdown.

Dozens of federal employees rallied at Boston’s Post Office Square in protest of the government shutdown on Friday Jan. 11,  the first day that thousands of federal workers did not receive their paychecks.

In December, the U.S. Senate voted unanimously to pass a temporary funding bill to keep the federal government open. Because the legislation didn’t include $5.7 billion in funding for the wall at the southern border, President Trump vetoed the bill,  initiating a partial government shutdown. Since then, the U.S House of Representatives passed individual appropriation bills to reopen government agencies, but Senate Majority Leader Mitch McConnell refuses to bring them to a vote.

Employees of the Environmental Protection Agency, Transportation Security Administration, American Federation of Government Employees, and other federal unions and agencies came together to rally against the shutdown. Despite the extremely cold January air, dozens of protesters held up signs with messages reading, “Don’t Wall Feds Out” and “Let Us Work” as they chanted together.

Steve Calder, President of AFGE Local 3428, was one of the leaders of the rally wearing a bright red sticker that read, “Standing together for what’s right!”

“End the shutdown!” Calder and his fellow ralliers chanted together with fists and protest signs in the air.

The protesters were joined by Senator Ed Markey who discussed the tragic problems caused by the shutdown.

“This entire crisis has moved from the Mexicans who are going to pay for the wall, to American workers who go without pay,” Markey said. “It is cruel and it is unconscionable that families have to suffer because the president has a fantasy that he has been engaging in for the past two years.”

Markey informed the people that the Senate passed a bill saying every federal employee will get their back pay. He ensured that he’s going to fight to make sure that President Trump signs that bill. Until all federal employees are getting their pay, Markey is going to forgo receiving a paycheck for his work in the U.S. Senate and is going to make sure that the federal workers get their deserved paychecks for their work.

Steve Tolman, President of the Massachusetts American Federation of Labor and Congress of Industrial Organizations (AFL-CIO), spoke at the rally saying that the shutdown was “nothing but foolishness from the President of the United States” and that everyone should stand together to make sure that those who work in the federal government are treated with dignity.

Thousands of federal employees are uncertain when their next paycheck is coming and are concerned as to how they’ll pay their bills or feed their families.

“It’s a lot of anxiety not knowing when the next paycheck is going to happen and not knowing what I need to do to make ends meet,” Calder said. He said if he could get one message to President Trump, it would simply be to end the shutdown.

“Ladies and gentleman, this is a fight worth having,” Markey said. “The president is using ordinary families of federal workers as pawns, as hostages, in a larger game for a border wall which every security expert says will not work to protect our country. My job, and I join with you in this fight, is to make sure we open the federal government and then we debate about how to provide security at the border in our country… I stand with you.”