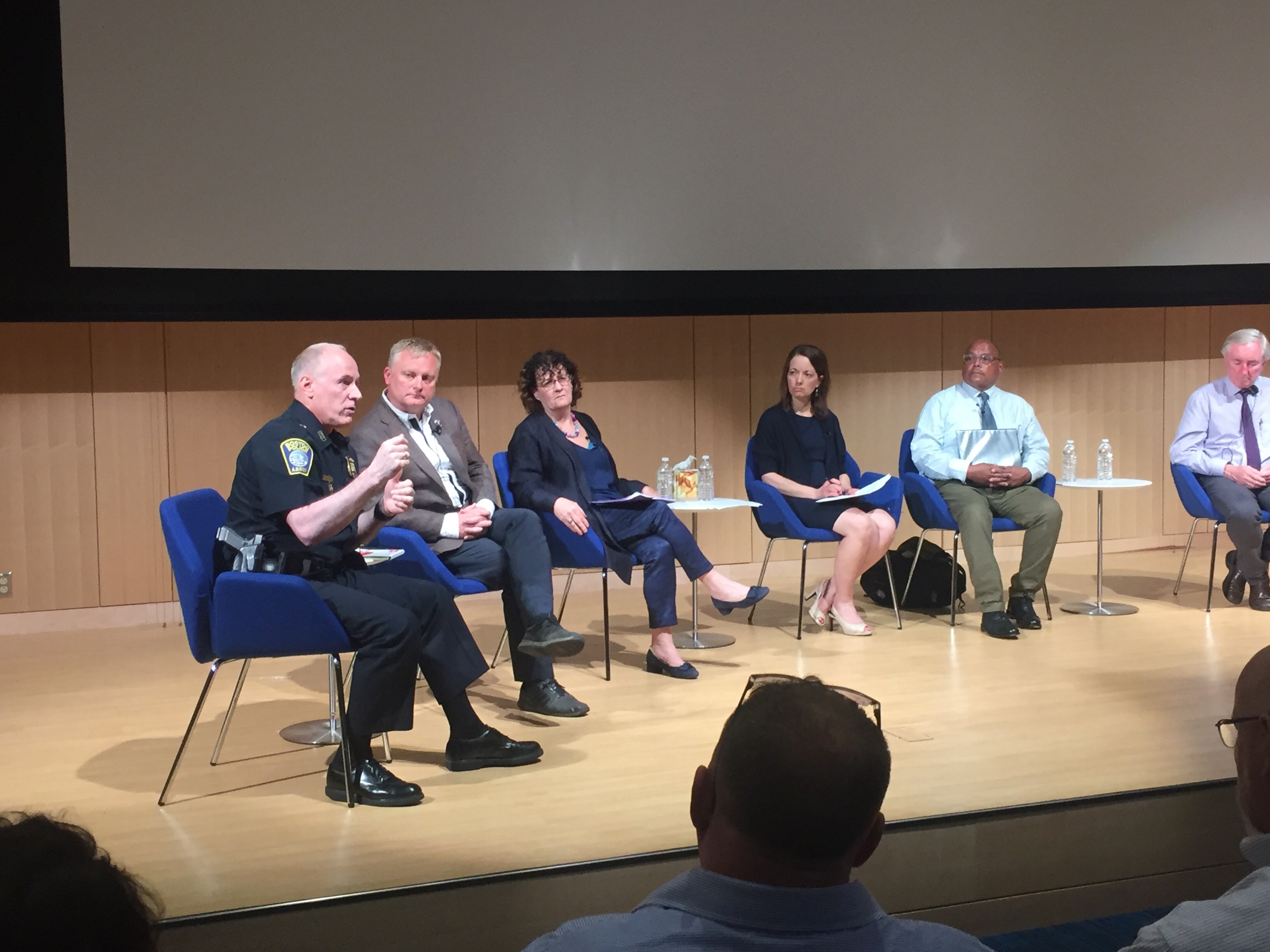 A panel discusses homelessness in and around Back Bay, and the area around the Boston Public Library. Photo by Jordan Frias

Downtown Boston residents trying to understand what to do with the rising homeless population in their neighborhood attended a public forum on the topic hosted by the Neighborhood Association of the Back Bay at the Boston Public Library.

Questions ranged from whether to give homeless people money on the sidewalk to what to do when people sleep and loiter around the library and in public alleys.

Stratton said he encourages the public to continue to call 911 should issues arise related to the homeless, but says he and his colleagues are being “proactive.”

“You have to continue that balance … law enforcement and quality of life issues,” Stratton said. “We’re going to continue to do the best we can.”

Jim Greene, director of emergency shelters with the city’s Department of Neighborhood Development, said calls dealing with immediate, medical and safety concerns related to the homeless should be directed to 911 but reoccurring issues should go to 311, the city’s non-emergency hotline.

Like other members of the audience Greene acknowledged that the prevalence of homeless encampments in and around the Back Bay has become an issue, particularly those right outside the Boston Public Library.

“I agree, I don’t like them either. I don’t like them because people are at risk of violence,” Greene said, referencing recent fires from an encampment under the Massachusetts Avenue overpass and another in the Back Bay Fens.

Greene said it is likely that most of the people out on the street now are from outside of Boston.

Lyndia Downie, president and executive director of Pine Street Inn, said only 2.8 percent of the homeless population stays outside of shelters so the number of people on the streets continues to decline as does the number of days people spend in shelters.

But Sheila Dillion, chief of housing and the director of the Department of Neighborhood Development, said almost 60 percent of the people in shelters are from outside the city.

“We’re the biggest city in the state, there are a lot of services here,” Dillion said. “And we want to be welcoming. We would also very much like other parts of the state and other states to be more welcoming to their own.

“But it is getting to be a situation where we are talking to the state because they’re about to procure their shelter dollars, so let’s have some uniform policy so people can stay closer to where they have the real supports,” Dillion said. “We are working very closely with the state about discharge planning now, really looking at where people are coming. And are they coming from other systems of care.”

The need for housing was also mentioned by James O’Connell, founder and president of the Boston Healthcare for the Homeless Program.

O’Connell credited the city for its treatment of homelessness as a public health crisis throughout the years but said weakness in all sectors need to be addressed as more people come into the shelter system and into the city.

“I don’t want to lose sight of the fact that much great work is being done,” he said. “We’ve worked with individuals to get them housed or get them to the services they need, and then the next group comes in afterwards. So this is an ongoing problem that at some point will only be solved systemically. So please be very careful that we don’t assume that the problem is the same problem.”

The creation and preservation of long-term supportive housing was also discussed as a solution to homelessness but Dillion said resources for that is an issue.

While Boston has housed many chronically homeless folks during the Mayor Martin Walsh’s term Dillion said she is hoping solutions from the state could help alleviate the pressure on Boston shelters.

Dillion said the city is working closely with the state which has put out an Request For Proposal for its shelters.

O’Connell said homeless folks won’t be taken care of “unless we provide them housing,” provide services to keep them housed and prevent evictions.

“If we’re going to fix this problem we’re going to have to address all of these weaknesses,” O’Connell said while referencing the need for more substance-use disorder treatment and access to mental health services. “We know what works, we just don’t have enough of it.”