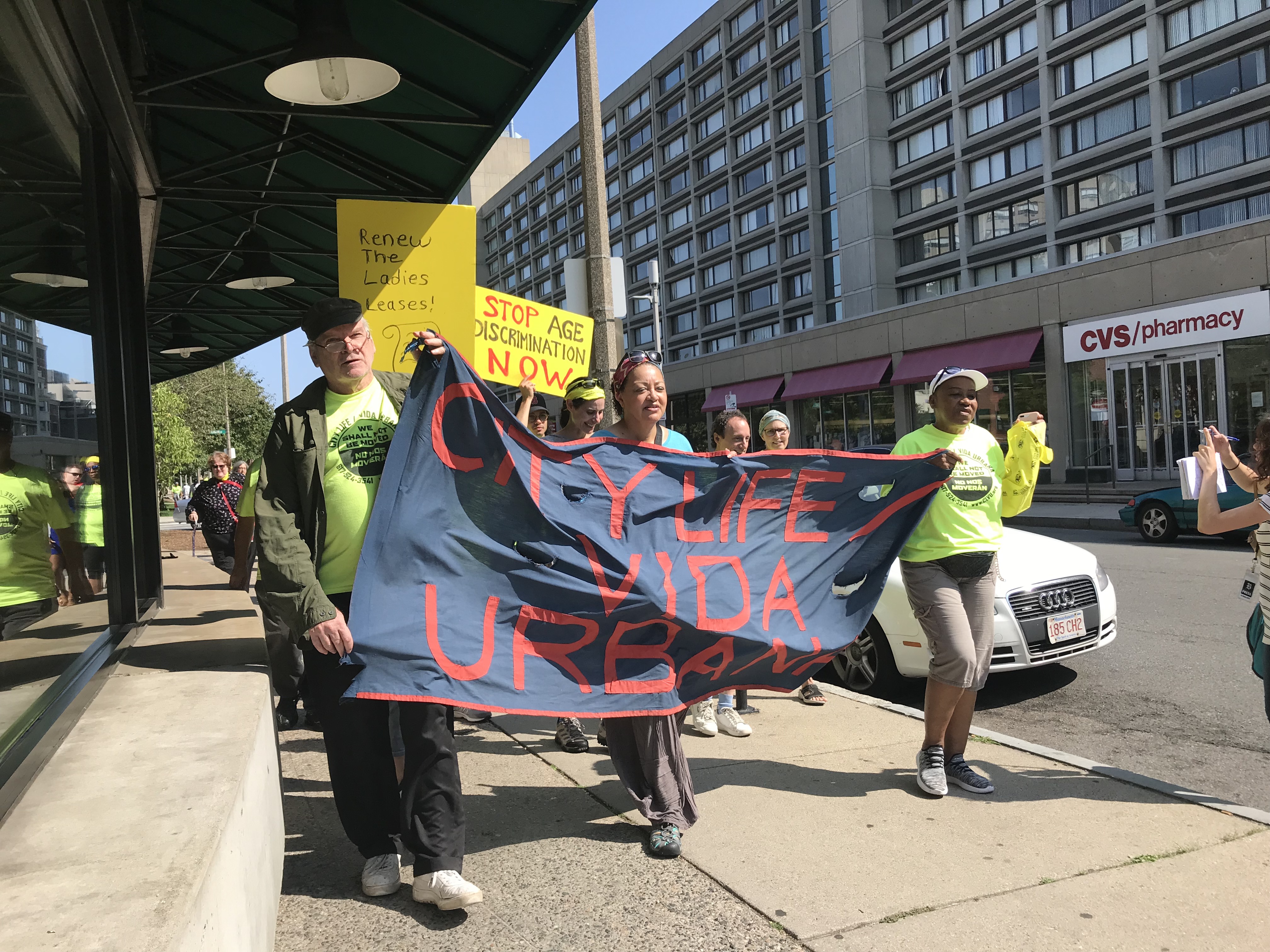 On July 27, women facing eviction from Our Lady’s Guild House (OLGH) and volunteers with housing justice non-profit City Life / Vida Urbana, embarked on a journey from Symphony Community Park to New Britain, Connecticut, where they held rallies in front of New Britain City Hall and the headquarters of Daughters of Mary of the Immaculate Conception, an order of Catholic nuns, demanding that the organization stop evicting older tenants.

The older women facing eviction and volunteers of City Life / Vida Urbana held an hour long press conference at Symphony Community Park at 9am, highlighting grievances that they experienced after Fenway-based Marc Roos Realty became the nuns’ business partner in 2012, and reiterating demands that they had presented in a petition, which garnered over 1300 signatures. They hoped to deliver it, by hand, to the head nun, Mother Jennifer Carroll, in New Britain, CT.

The petition called for OLGH to reverse their decision to terminate leases with long-term older residents, provide new and renewable leases to allow these older women to remain at OLGH as long term-residents, who could only afford single-room occupancy in Boston, and reverse a new policy that allows short-term, AirBnb hotel-like rentals. Some of the older residents who were evicted sent complaints outlining their post-eviction living conditions to Attorney General Maura Healey’s office.

Judy Brunette has been an OLGH resident since 2008, and is one of the few residents advocating for the renewal of long-term leases with OLGH. Judy claimed that after many older women had been no-fault evicted by Marc Roos Realty, chapel nuns would constantly ask the remaining group of women when they were going to move out. She also contends that maintenance people were told not to help them, and that the Mother Jennifer Carroll hired an administrator who created an atmosphere of fear and intimidation.

“The person would run around and scream at people, yelling “what are you doing down there?” said Judy.

Judy says the actions of OLGH nuns cut the deep communal bonds that residents once had.

“Women who had been there for a while would do their food shopping, fix their meals together, and go to the chapel for rosary and Mass on Sunday mornings,” said Judy. “It was like a family, but all that has changed now.”

Along with principles including respecting the elderly and demonstrating love and hospitality, the original mission of OLGH was to “provide safe and affordable housing for single women, working women, retired women or students.”

Alex Donte-Capellan, a community organizer, claims that OLGH nuns were violating their mission statement, and engaging in age discrimination and misusing their charitable status.

“I’ve been an organizer who focused in displacement for a really long time, yet I haven’t come across such an instance of blatant age discrimination,” said Alex. “What’s happening in that building is illegal and unjust.”

“They wanted us to behave like good Catholics and stay quiet,” said Berry.

Spokesperson for OLGH and Marc Roos, Don Martelli, said that OLGH had always been “transitional housing” for women and wasn’t meant for long-term housing plans. He also  said the protestors were making false claims against people of the Catholic order, including Mother Jennifer Carroll.

“It is extremely unfortunate and disheartening that, despite our ongoing attempts to work collaboratively with the tenants, they have taken an aggressive approach that makes false claims against the Daughters of Mary of the Immaculate Conception, the property management company and personally, to Mother Mary Jennifer—a woman who has given her life to serving and caring for others,” said Martelli in a statement.

Participants chanted, marched around New Britain Central Park, and made speeches. Although heavy rain drenched the participants, they continued their rally for an hour, shielding their heads with protest signs.

Marcy Wells, a OLGH resident who lived there for 2 1/2 years gave a speech, quoting scripture and accusing the Catholic Order of violating Catholic principles.

“According to James 1:27, ‘the Religion that God our Father accepts as pure and faultless is this: to look after orphans and widows in their distress,’” said Marcy. “What the nuns are doing to these older women the age of my mother sickens me. It goes against God’s purpose.”

The rally participants then traveled to the Osgood Avenue property, the Daughters of Mary of the Immaculate Conception Headquarters, where they were denied access. Yet, they lined up on the sidewalk opposite to the property grounds and chanted.

The protestors boarded the bus and returned to Symphony Community Park by 4:30pm.

Margaret Turner, the main attorney representing the OLGH residents, said via email that the residents have a strong case to advocate not being evicted and that it is illegal for the OLGH nuns to lease its charitable status housing units for profit purposes.

Robin Barnes, 71, a volunteer for City Life, noted that this was an incident reflecting the broader displacement crisis in Boston that she hoped to fight against.

“We have had a displacement crisis in Boston, where landlords are raising profits by doing injustices like this,” said Robin.

Judy said that even if the Catholic order didn’t respond to their demands today, she would keep on fighting.

“Most people don’t understand that there’s organizations like City Life, who will help people who need help,” said Judy. “This rally is just one way of gathering attention. Our efforts will continue.”