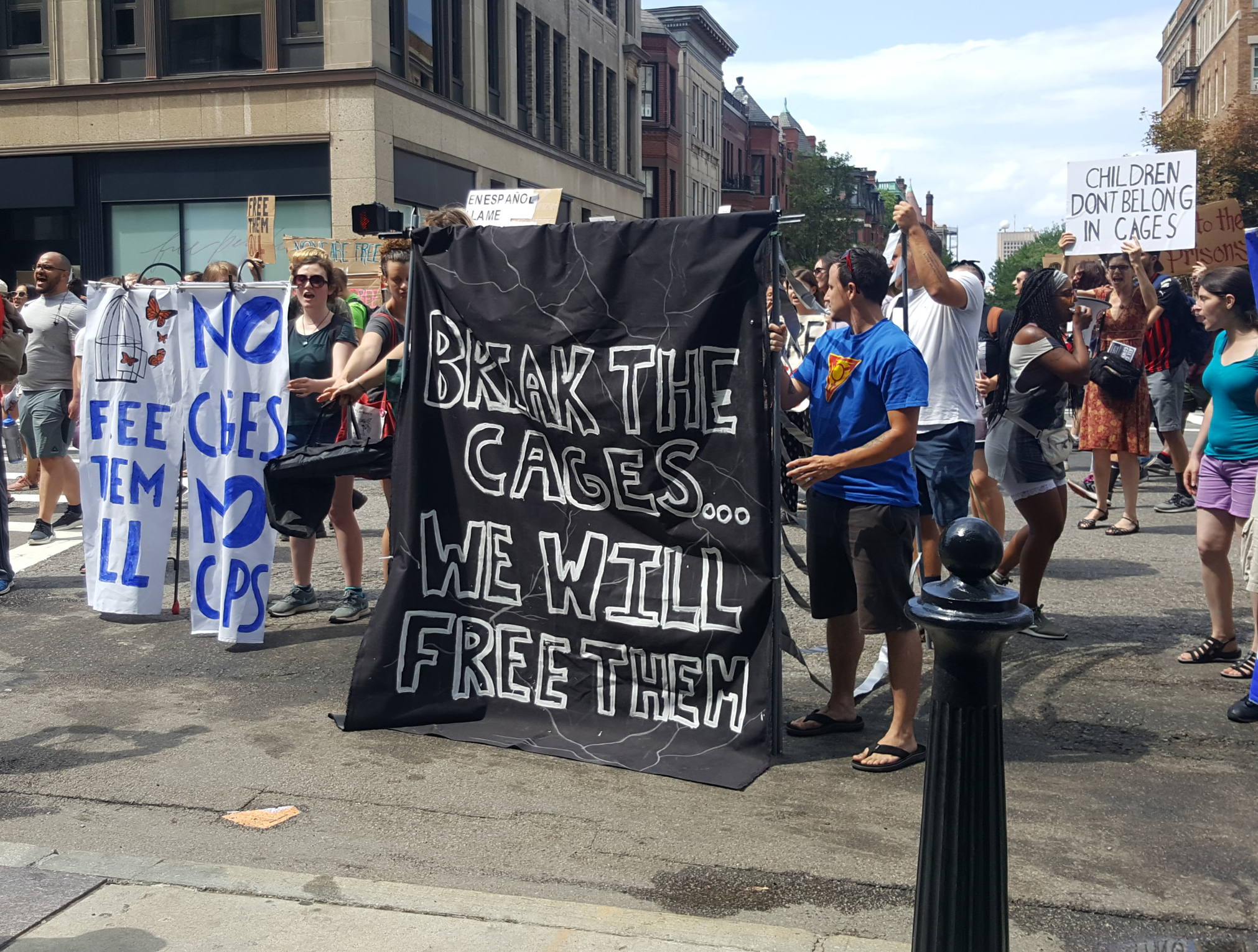 Roughly 500 protesters — led by 19 different organizations — gathered in downtown Boston on Sunday, August 4, to take a stand against the American Correctional Association.

The ACA, an accreditation agency for prisons and detention centers in the United States, held its annual Congress of Correction at Hynes Convention Center from Thursday, August 1, through the following Tuesday. The conference serves as a vital meeting place between the ACA and its allies — including several for-profit prison companies — through workshops and networking opportunities. Two such companies with members in attendance were CoreCivic and GeoGroup, both of which run the vast majority of ICE’s detention centers, and thus make money off of operating and filling them.

The event sparked an urge to action in several local activist groups, including Deeper Than Water, Black and Pink Boston, the Democratic Socialists of America, and the Boston Immigration Justice Accompaniment Network. This urge to action culminated Sunday afternoon, when the groups and other activists rallied in front of the Boston Public Library, marched down Boylston Street, and coalesced in front of the Convention Center donning signs and megaphones. In front of the crowd stood a line of Boston police officers, blocking off the center’s entrance to reporters and protesters alike.

“We’re here because the American Correctional Association has been giving prisons the right to continue to dehumanize people,” said Martin Henson of Black Lives Matter Boston, referring to the ACA’s accreditation process. One of the protest’s primary demands was to stop the accrediting of facilities with known human rights violations. For example, El Paso Detention Center — the facility that Rep. Alexandria Ocasio-Cortez famously visited — is currently accredited even though there is severe overcrowding and people have been forced to drink from toilets. Cibola County Detention Center in New Mexico is where trans refugee Roxana Hernandez died of dehydration and with signs of physical abuse; this facility, too, is accredited.

“How do you [ACA employees] sleep at night knowing that you rubber stamped oppression, cruelty, and inhumanity?” asked currently incarcerated prison abolitionist Wayland Coleman, “Who are [these prisons and facilities] accountable to… if you ignore the reality in your reports?”

From the windows above, conference-goers pointed and laughed at the crowd below. One conference-goer on the street prodded some activists into a heated argument, before moving behind the line of police and laughing.

Towards the tail end of the demonstrations, members of Deeper Than Water played aloud recordings sent by Boston-based immigrants directly affected by ICE and its detainment policies. One unnamed mother spoke on the grief she felt for her son, who has been in ICE custody for the last three months.

“I need to see my son; it’s been three months since I’ve hugged him. We are not criminals… we come because of our circumstances.”

Another unnamed woman, originally from Honduras, detailed the pipeline of injustices she and her children experienced making their way to the United States to escape indigenous persecution.

“I did not leave my country voluntarily… I had to decide whether to live or to die. [We were] extorted by the Guatemalan and Mexican police, and mistreated in the immigration center in Arizona, where immigration officers have no decency.”

Ultimately, many of the groups involved argued, this issue comes down to a core idea: that human beings should not be locked up in cages as a form of punishment, especially if what they’re being punished for is trying to survive.

“We’re seeing kids in cages, we’re seeing families separated, we’re seeing people that look like me and you never seeing their people again,” said Martin Henson of Black Lives Matter. “Until [prisons and detention centers] stop doing that, I’m going to be out here every single day.”