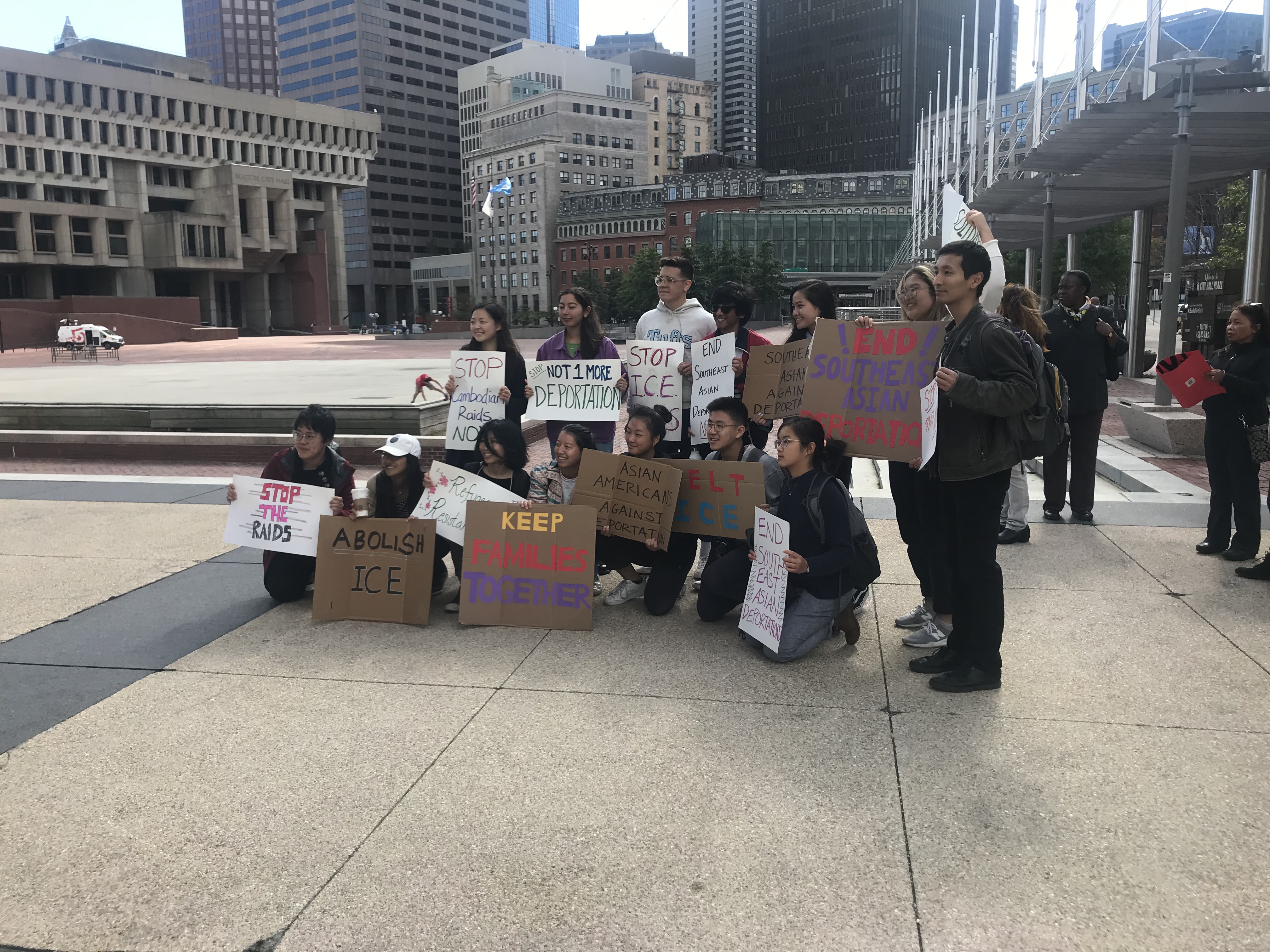 Tammie Christopulos of Lynn was in the shower last Saturday morning when her doorbell rang. She knew what it was: a deportation order for her husband, Saray Im, who was born in Cambodia but has lived in the United States for the last 35 years.

“My husband is not a threat to anyone in the community,” Christopulos said.

Im isn’t the only member of the Cambodian community facing deportation. According to activists and organizers, Immigration and Customs Enforcement has “planned raids and mass detentions” this week that will target Cambodians across the U.S.

Im, Christopulos and three of their children were among dozens of people who rallied outside the John F. Kennedy Federal Building in Boston City Hall Plaza on Monday to protest the sweep.

The demonstration was organized by Asian American Resource Workshop and Greater Boston Legal Services, to show solidarity and support for the Cambodian community.

Demonstrators carried signs splashed with slogans like “Melt ICE”, engaged in call-and-response chants with organizers and listened to remarks delivered by activists and community members.

Several described what they see as an increase in the targeting of Cambodians for deportation under the Trump administration.

The Providence Journal reported that between fiscal year 2017 and 2018, deportations of Cambodians within the United States saw a 279 percent increase.

According to Bethany Li, an attorney and the director of the Asian Outreach Unit at GBLS, many Cambodians and other Southeast Asians came to the United States fleeing the violence that wracked Southeast Asia through much of the 20th century.

That includes both the Vietnam War and its aftermath, as well as the genocide perpetuated by the Khmer Rouge against the Cambodian people.

“The genocide was driving people out,” Li said. “I have clients who remember fleeing the countryside and seeing children crying over their dead parents as [they were] fleeing Cambodia.”

Both she and Kevin Lam, the Organizing Director for AARW, argued that many Cambodians with criminal records facing deportation have since rehabilitated themselves.

Im said he was arrested in 1996, but declined to tell reporters why. After being released from prison, Im was held by ICE for a few years and then was released under supervision.

In 2002, Im began working at Axcelis Technologies, Inc. In 2011, he married Christopulos, after the two had already spent years together. Now, Im is a receiving coordinator at Axcelis and coaches both flag and tackle football.

“For me, family is everything,” Im said. “[The threat of deportation] bothers me, but the thing is, I just have to keep moving on. That’s not going to stop me from feeding my kid, making a better home for my family. Things like that normally break people down, but I’m not that weak to be breaking down.”

Hour Pech of Lynn came to the United States 40 years ago, when he was nine years old. Before that, he had spent time in a refugee camp in Thailand.

Pech said he was “locked up for a while” in the U.S., but has been “doing good” since then and thought any issues had been resolved.

Pech said he has an 11-year-old son and that he has cared for his mother since one side of her body was paralyzed by a stroke.

Organizers, Im, and Pech said that those with deportation orders are scheduled to report to an ICE office in Burlington on Thursday. Another protest is planned for that day in Burlington.