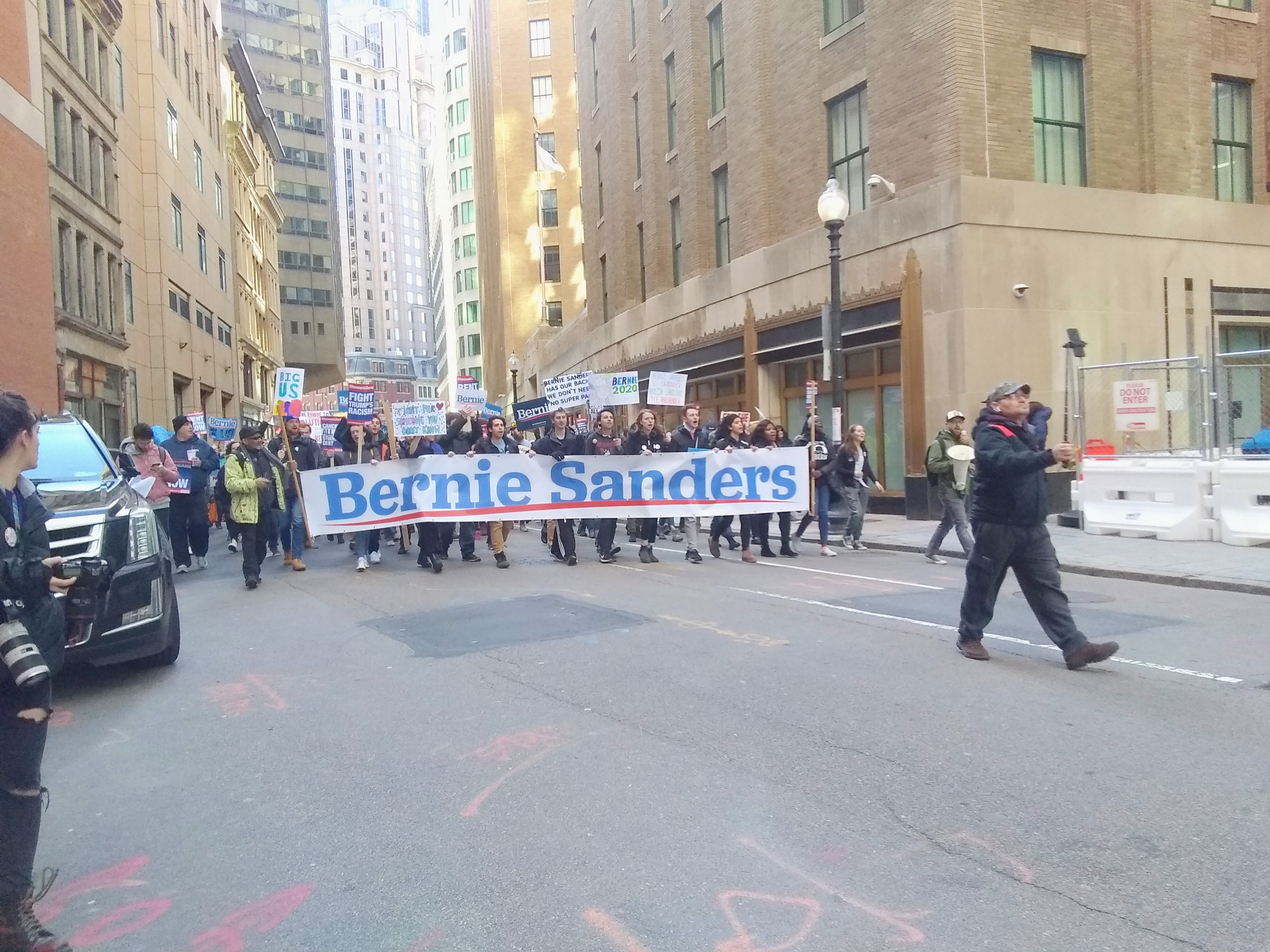 Boston was feeling the Bern last weekend as hundreds gathered on Saturday, Feb. 22 in front of the State House in Boston in support of Bernie Sanders’ campaign for president.
The rally, organized by Boston Socialist Alternative and the Democratic Socialists of America (DSA), drew an enthusiastic crowd in an effort to promote the candidate ahead of Super Tuesday. Several speakers expressed their support for Sanders and his vision of a country that provides the working class with a better quality of life. Among the speakers were Rep. Mike Connolly (D-Cambridge), former president of the Massachusetts Teachers Association Barbara Madeloni, as well as representatives of Socialist Alternative, DSA, and various local coalitions.

Sanders has campaigned on a progressive platform of Medicare for All, the Green New Deal, a $15 per hour minimum wage, and affordable housing for all, which has galvanized a sizable amount of working class and young people. After winning the most votes in Iowa, New Hampshire, and recently Nevada, Sanders is the frontrunner of the 2020 Democratic primaries.

One of the driving forces behind the mass support for Sanders, which was reflected in chants such as “Tax the Rich!” and “Not Me, Us!” is the idea that the billionaires of this country have taken advantage of their workers, and of the poor.
“He’s talking about the working class and the poor of this country who have been left behind for decades,” said Jane Binkerd, who was marching with the crowd toward Dewey Square, holding up one of hundreds of signs in support of Bernie.

Sanders supporters cited a wide range of issues they consider important in their decision to come out and rally for him, from healthcare to foreign policy. Binkerd, who is an activist involved with Mass. Peace Action, said that Sanders is the only one who will guarantee an end to endless wars.
“It seems like this administration is beating the drums to go to war with Iran, and Bernie knows that that’s a mistake,” Binkerd said.

Sanders has also garnered support from many union members who like his support of the working class, and his environmental policies. One local ironworker spoke at the rally and expressed his support for the Green New Deal: “If we fight hard enough for it, the Green New Deal will bring the country into total energy independence from the corrupt fossil fuel industry.”

Although he’s not the favorite of the Democratic establishment, Sanders has managed to drum up massive support among voters, who believe he is willing to take on the political establishment, and end the corporate influence that has pervaded the political sphere throughout the history of the United States. They believe that Sanders is a rare example of a politician who consistently stands by his principles, and does not cave to corporate pressure.

Dylan, who is originally from Vermont where Sanders has served as both mayor and Senate representative, was marching in a t-shirt showing the famous image of Sanders being arrested at a civil rights protest in 1963.
“I’ve known about Sanders for a long time, and of his record in Vermont as a trusted politician. He attracted a lot of voters from both sides, just by advocating for what the people want,” Dylan said.

The support for Sanders among the working class and the youth indicates that voters are willing to support progressive measures to improve the lives of the citizens of this country, especially those who have been disenfranchised by the current system. Binkerd summed it up simply, saying, “I’m a passionate supporter of Bernie Sanders because I believe he is the best choice for all of us.”