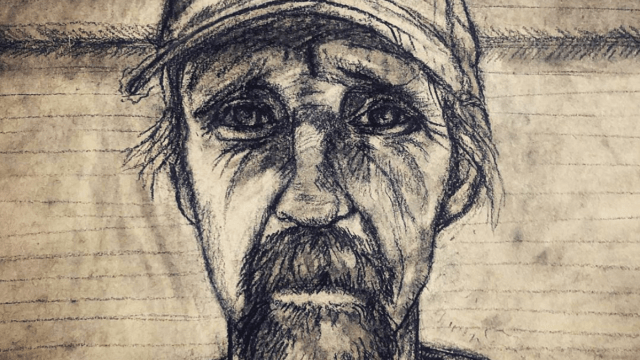 It was 22 March 2020. There were about 12 of us living in the shelter. Saturday morning was our last day there.

We had no place to go. It would be my first day outside with nothing open, no restrooms, no place to sit and have a hot cup of tea, it really was hard out there. As the days went by and weeks shot past, the lockdown was really becoming a reality. It was like one of those computer games had come to life. March was a hard month, still cold raw outside, no sign of life anywhere. As I would sit with other homeless friends we would watch the empty streets and read. Not a soul in sight, no cars, just the empty ghost buses picking up a few people. Food was hard to come by, as all meal programs had shut down. No water to drink. Me and my friend saw it was becoming harder, this virus was no joke, it was very real and scary.  When lockdown was confirmed everybody was told to stay home and be safe, they were locked in, we were locked out. When they announced that the cases and numbers were rising it got really scary, so I started wearing a mask to protect myself and others as COVID-19 was outta control.

April. A month had gone, still not word of opening up Harvard Square, Cambridge. Well, talk about a cold spring. I had never seen or experienced such a freezing, windy, wet spring, nowhere to go to get warm. I remember being at my camp spot trying to stay warm, the wind was howling and cold air was all around.

The construction site down the road from me was very alive with all the scaffolding clanging and banging as the cruel New England wind was tearing through. It was that heavy that it sounded like people trying to break into the building — kinda creepy, as there was no form of human life at all. I would lay there, not even get up, as the rain was so hard and heavy there was no point in getting up. It was a day and a half. I would just try to sleep through it all, hoping when I woke up it was over and a clear day to go about my business.

Food. Finally the City of Cambridge had decided to pay businesses to feed us all, as we had not had much food before COVID-19 had happened. I remember me and my friend decided to try out the Quakers. I had heard of them but never knew where they were. They usually give out clothes, not food, but this time they were fully on deck and their ship was stocked up and ready. They gave us all kinds of good stuff. First time I went I got nothing. The line was not long but the waiting time was limited and my patience was short. I was not going to go again, but my friend convinced me. The next time I went I got a full bag of goodies: sandwiches, Snack Packs, and water. I still go to this day, as long as they are doing food during these hard times, so big shout to Cassie, my friend at the Quakers Society, thank you for helping all of us and doing a great job, my friend. I appreciate it.

With these folks helping us, we also got word of First Church Cambridge, where Friday Cafe was opening up to service us too. This was great as we really had only one place, the Quakers, on Tuesdays and Thursdays, but now we had more options including a full meal and, of course, more water.  Things were looking up for us homeless folks, it was a blessing let me tell you. Hunger was solved 100% because really nobody should ever go hungry in this world. All meal programs were shut down due to you cannot sit in and be around people. Like I said, it was great to receive food, so another big shout out to Reverend Kate at the First Church and her crew, who are all working hard to serve us during these hard times. We love you guys, big thanks.

So now we were being fed from four organizations — not forgetting my dear friends from Outdoor Church, Reverend Pat and Reverend Tom, every Sunday bringing us awesome food and water again, and a fourth organization called Outreach, those guys are amazing. Thanks, John Mark and all the girls that have been helping us through the late evening if we missed a meal. Big shout out and thanks to you all, love you guys.

So like I said, food problem solved. Things were still shut down but at least our bellies were full. Ghost town. I still remember hoping the Public Works truck would drive by and instead of saying, “Stay home. Avoid being out,” I want it to say, “THIS PANDEMIC is all over now. It’s safe to return back to your normal life.” But no such luck. I stopped checking my phone for the number of sick and unsick people, aka the Death Count. It was just too sad and very scary.

Well, April had finally passed, thank God. Christ knows it was a tough one. May had arrived but it was still not warm enough and very few people were out. The ones I noticed the most were people jogging, getting exercise, walking more, fewer cars. It felt good to see how less pollution meant cleaner air. Two months just jetted by. I could see no one’s faces. We were now in the city of the masks, people wearing rubber gloves and hand sanitizer at the ready. I mean this was just crazy. You would see some folks wearing visors. Jeeze. We ain’t knights. I understand what this all meant but I think some folks were going over the top.

May was tough too, just the empty roads with very few cars and bodies walking in the Square. I remember spending time walking through Harvard Yard seeing the students go about their studies but not anymore. Not a soul in sight, just the whole yard to myself with me and my thoughts flashing by every second. I spent a lotta time there as it was quiet and peaceful. You could watch all the animals running around. See, it affected them as they were all very hungry and lost with no people to feed them. It was as close to nature as I had been in a long time — turkeys running around, wild rabbits, and lots of squirrels. You see, the animals knew there something was wrong with the picture.

Washing and showering has been and still is hard for us all, but we make due, you know. May could also be cold and windy. You could see it was really getting to people, although it was only two months.

I have been lucky with friends taking care of me too, buying me a meal. Thank you guys. You see when something like this happens you appreciate the world and life a lot more. It’s those little things in life that count.

I think Boston has done a very good job of social distancing during these very hard times. We and the people of Middlesex County helped in a massive way to stay safe and healthy and well.

Now we’re into June and the weather is finally real hot and nice, very comfortable to be out in. Businesses are opening up more little by little this month, and more people coming out instead of staying home. Yes, it will take a while before things return again, but it’s a start.

Always remember this world įs a beautiful place to live in. Appreciate our planet Earth.

My name is Alistair. Hope you enjoy my story. It’s from the streets and my heart.

Thank you, Sam, for letting me do this.