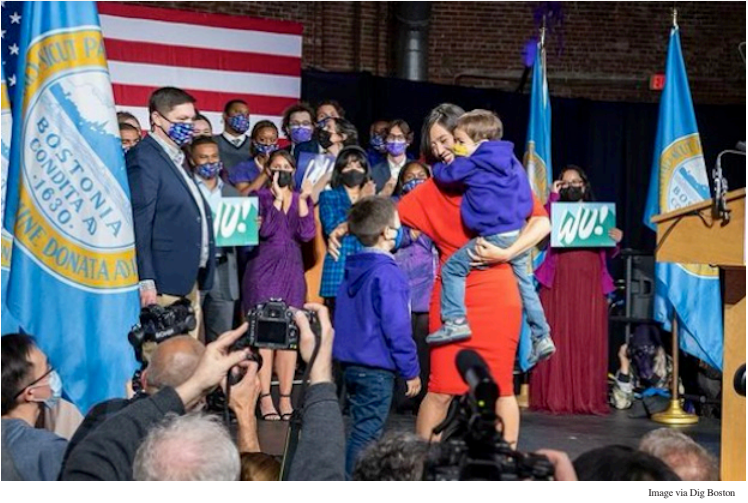 With 100% of the votes from all  255 precincts  counted in the City of Boston, the still unofficial but decisive winner of  the mayoral race is Councilor  Michelle Wu. Her opponent,  Councilor Annissa Essaibi  George, conceded Tuesday  evening.

As even those who paid little  attention to the race are likely  aware, this is a major moment.  Wu is the first woman as well as  the first person of color elected  to run this historically racist  metropolis. If you take issue  with that characterization, then you probably voted for Essaibi  George. If you spent time outside of  downtown on November 2, as I  did, then you may have heard the  buzz about increased poll action  in Hyde Park and Dorchester.  For a moment, the status quo  team thought that they were  going to pull off an upset in the  face of Wu’s 30-or-so point lead  heading into this.

But they didn’t; the old  neighborhood guard lost, and  that’s another big deal for Boston,  because as far as I know it has  never happened before. Not at this  level at least. As Dan Atkinson  reported for Dig Boston last  month, “Essaibi George beat Wu  in money from City of Boston  employees overall—pulling in more than $151,000 from nearly  450 donations, compared to  Wu’s $10,000 from almost 150  donations.”

Of all that city worker cash,  more than $100,000 came from  members of the Boston Police  Department. Some of whom live  in the city, others who fed the fire  from the suburbs. And that’s not  even counting the money their  spouses and family members  gave Essaibi George, which is  harder to, if not impossible to  follow and tally.

People should remember how  much muscle and money the  police and their allies put into  this race, because beyond the  well-reported milestones of Wu  being a woman and person of  color, at a deeper level, this vote obviously represents much more.  At the least, we now know that  the few lefties scattered across  Boston and in strongholds like  Jamaica Plain outnumber the  troglodytes who remain in South  Boston and Dorchester.

Again, if you take issue with that  comment, then I bet that I can  guess who you were pulling for. And holy shit, a this was a  trouncing. As the tally stands,  Wu took 91,239 votes, or 63.94%  to her opponent’s 50,879 votes  (35.65%). In a city that now largely  resembles downtown Dubai  and is basically an investment  playground for developers from  all over the world to extract  money from, it’s significant that  those who still go to the polls  picked the clear progressive.

As for what comes from  this point forward, that ought  to be interesting. Developers  both large and small sure aren’t  thrilled, and as for angry cops  and city workers claiming on the  socials that they’re packing up  and moving to the ’burbs … some  of them will actually split, sure,  but many will also stay and fight.

For what, I don’t know, but  I can assure you it is nothing  good. If you supported Wu in  her historic election, then this  is definitely not the time to  abandon the new mayor.

This article was originally published  by Dig Boston on November 3,  2021 and is being republished here  with permission. n