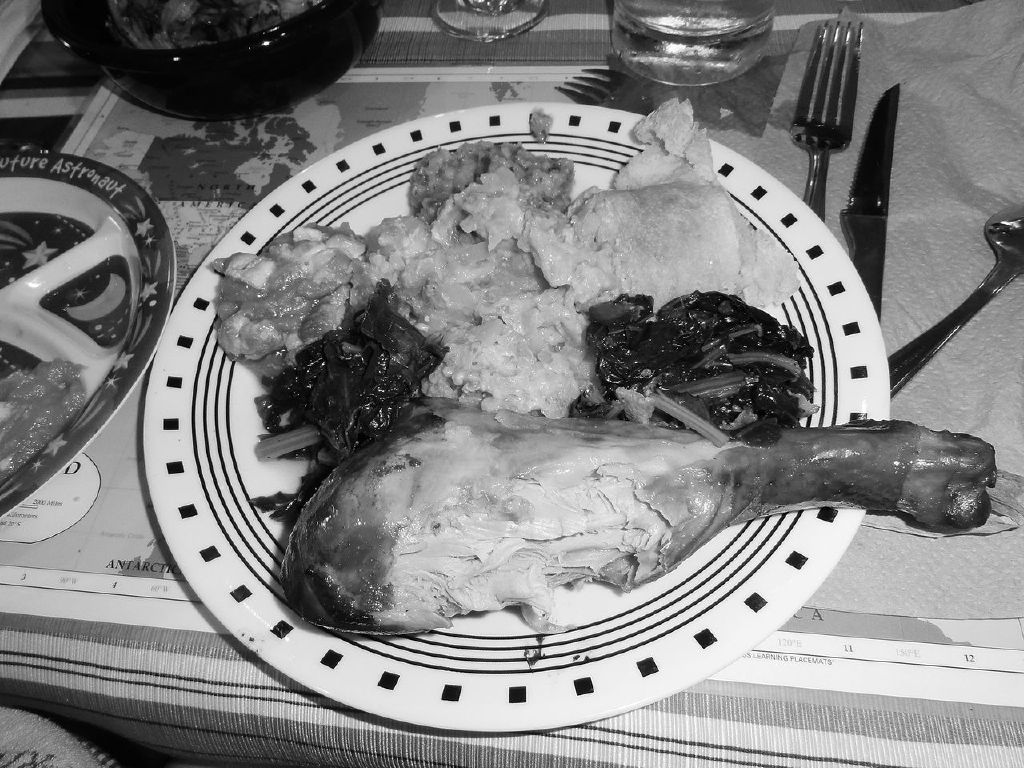 Valorie had been doing such work for thirty years and loves it. For the last two and a half years, she has not only been helping the individual that fired her, but was also a SPARE CHANGE NEWS vendor. Ever since losing her home and job, Valorie has been having lots of fun and getting assistance from friends and Rosie’s Place.

Pine Street Inn’s Women’s Inn had their usual fun for Thanksgiving too. Everybody at both shelters enjoyed eating turkey, chicken, stuffing, pigs in a blanket, pizza and all the other dishes and desserts they normally enjoy serving guests. Pine Street Inn had, for a short period, the Macy’s Thanksgiving Day Parade on TV, but they had to turn it off to clean the area where the guests relax and eat. Later on, they turned the television back on so people can enjoy watching movies. Rosie’s Place had the television on for a short spell too, but I came too late to see what they were watching. Valorie went with me to the TD Garden Thanksgiving party and we had a wonderful time. She couldn’t go with me to the party at the Hynes Convention Center, though. The party at Hynes lasted from 5pm – 9pm on 25 November. She would have missed her curfew at Rosie’s Place if she had.

The Boston Celtics organization puts on the Thanksgiving Day Party at TD Garden every year. They call it the Garden Neighborhood Charities Table of Friends Event. The Thanksgiving dinner is open to anybody that is homeless or low income and struggling to put food on the table. They open the doors to TD Garden at 1:00 pm and close the event at 3:00 pm. This year, Felix Arroyo from Boston City Hall and others from the community helped serve dinner to the people who showed up for the event. There were representatives from Tufts, Beth Israel, Massachusetts General Hospital, Boston Medical Center, ABCD Boston and several other local businesses to help serve Thanksgiving Dinner to people at TD Garden. TD Garden had a music group named Street Magic that sang some songs by Frankie Vallie and The Four Seasons. They also sang “In the Jungle,” “Mack the Knife,” “My Girl,” and “Some Kind of Wonderful.” They sounded almost like Frankie Vallie and The Four Seasons. They ended the show singing Neil Diamond’s “Sweet Caroline.” Robert Kraft, the owner of the New England Patriots, did not help out this year at Rosie’s Place. He was sorely missed by many of the guests who remember how he helped serve Thanksgiving Dinner in the past. Hopefully we’ll see him again in the future.

The New England Patriots were not home for Thanksgiving this year so it’s understandable that we couldn’t enjoy Mr. Kraft’s presence again. Maybe we’ll see him for Christmas or one of the holidays next year. You never can tell. The Celebration of Life is a Thanksgiving party put on annually by the Boston Living Center. This year, in honor of the death of Mayor Thomas M. Menino, there was a moment of silence and they showed video clips of him laying the foundation brick back when the Boston Living Center was first founded. There were many pictures in the video of staff that work at the Boston Living Center and guests who go to the center for assistance. What surprised me was how many people shed a tear over the death of Mayor Thomas M. Menino not being present to help serve the Thanksgiving dinner like usual, and how many people cheered and clapped for new Mayor Marty J. Walsh who showed up for the event to help serve food to the people and to give a speech. Each year Liz Walker, who is now a reverend, shows up for the event at the Hynes Convention Center. She gives a speech and says a prayer for dinner at the event. This year she, Marty Walsh and several others spoke about their love of Menino and how much he loved us all in return. He served dinner at the Celebration of Life for almost all 25 years that they have been hosting this celebration. He was devoted to helping serve dinner at the Celebration of Life. For Menino, it was more than just a way to help the homeless like the countless times that he helped serve dinner at the Pine Street Inn Shelter or one of the other shelters in Boston. The Celebration of Life was a love deep in his heart. It became more than a celebration of the people not dying from HIV/AIDS; to Mayor Menino, it became a passion.

Just like in the past years when I’ve attended the Celebration of Life, we had lots of fun. We had a show put on by a transgender woman and we had lots of music played by the DJ who helped after she left. We danced to R Kelly and several other artists’ music. People had fun despite the solemn beginning and the fact that at the same time the party at the Hynes was being held, there was a protest outside the Dudley Station Police Department and outside of the South Bay Jail and South Station. In case you haven’t heard of the protest, it was a result of the police officer in Ferguson, Missouri who shot dead a black 18-year-old boy who had surrendered and threw his hands in the air. The officer was white. The officer had no charges filed against him as a verdict. They were trying to determine a verdict against the officer and they decided not to charge him with anything despite the fact that he shot a child in the hand and arm three times, once in the shoulder, once in the chest and once in the head.

I’m glad that Valorie and others throughout Massachusetts could have fun and enjoy some peace and love amongst each other for Thanksgiving Day and the days leading up to Thanksgiving Day. I think of Thanksgiving day as being like Valentine’s Day. We should all come together to show peace, love and respect for each other while we enjoy a nice meal and conversation with the people who influence us every day of the year, such as our friends, family and strangers that we meet on the street who are less fortunate than ourselves.