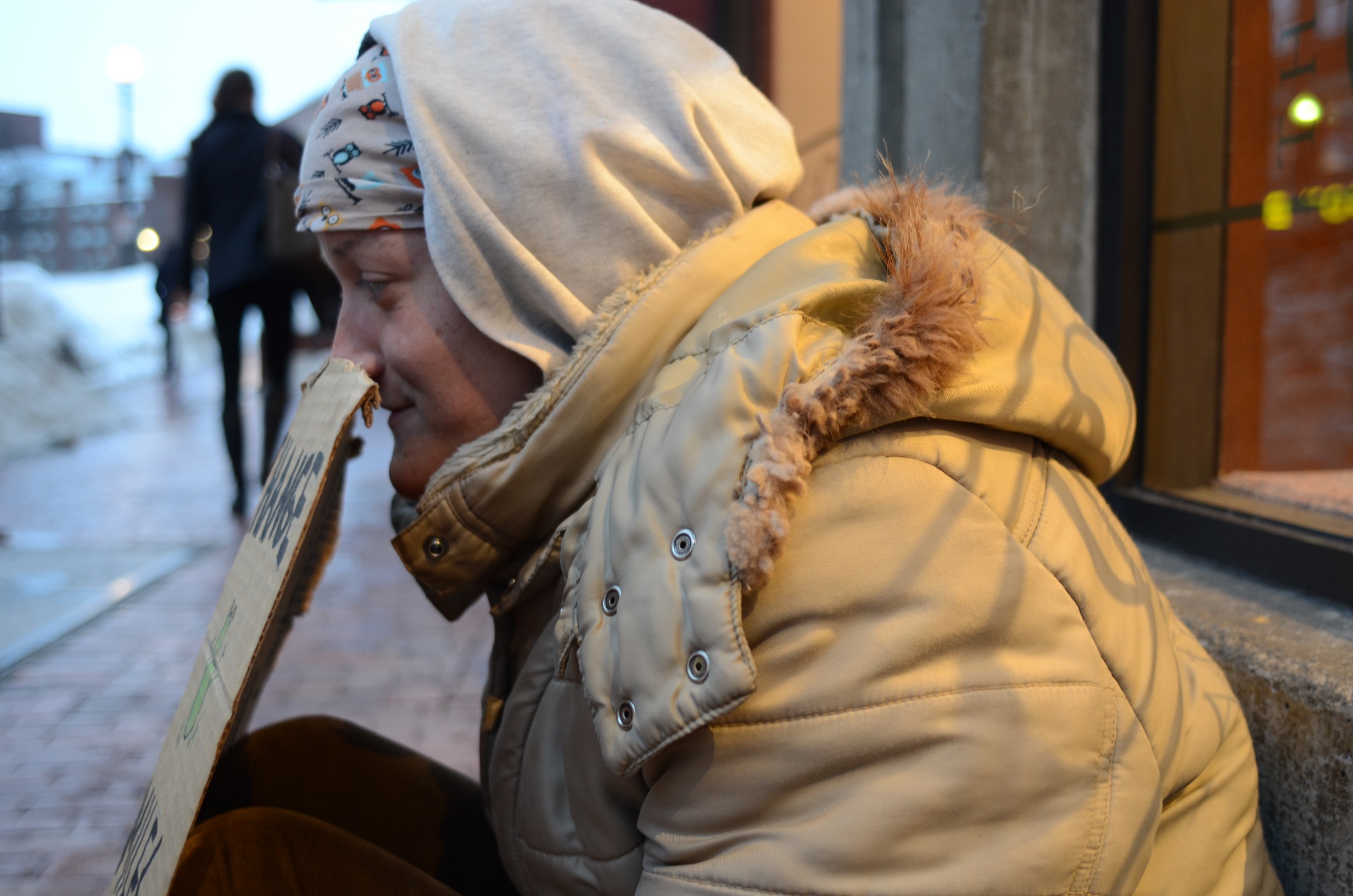 Brittany sat under an alcove in Harvard Square, sign in hand and a cup of loose change in front of her. She sets up there nearly every day, she says, with the same sign but with a different Dunkin’ Donuts cup. Her blue-dyed tips peek out of her yellow, owl-printed bandana. Kal stands next to her. He’s a soft-spoken shaggy-blonde-haired boy and when he speaks, Brittany smiles and nods, reassuring him. As her smile widens, her wrinkles deepen.

Kal had just met Brittany that afternoon, but as he is leaving, he shouts back, “Brittany, you’re awesome, be in touch.” Brittany smiles to herself.

It’s evident that Brittany is a crucial part of the Harvard Square Pit community. They count on her presence, as much as she depends on them.

Brittany relies on The Pit passersby for interactions, change and sometimes even feminine-hygiene products, she says with a laugh. Sometimes it’s easier to ask women here for tampons than it is to ask a shelter for them, she continues.

“It’s awkward asking a stranger behind a desk for a tampon, especially if it’s a he,” Brittany muses.

Brittany is not the only one. Bee says she also asks the females of The Pit to spare a tampon or pad. Bee has become the mama bear of The Pit, an accepted role amongst its members, so she feels comfortable asking people for feminine-hygiene products. Bee typically asks the hairdressers she’s become acquainted with through panhandling over the years.

Usually, the girls around here, if they’re new, will just panhandle for tampons or pads, she says. When women become comfortable in The Pit, they’ll ask one another.

These women are self sufficient because they feel they need to be. Brittany avoids shelters because she’s heard her fair share of horror stories. She says that women she’s met who have stayed in shelters have been robbed, assaulted or have left with lice.

Some shelters have become hardened with age after working with homelessness issues for too long, says the Rev. Kate Layzer, co-founder of the Cambridge drop-in center, Friday Café. The cold atmosphere is a discouraging place to room in, she continues. Day centers or neighborhood drop-in centers provide people experiencing homelessness with an alternative.

Friday Café occupies a small room in the First Church of Cambridge on Garden Street, a small space for a small group of about 40 people, including staff. The program is new—it just started in November. Friday Café supplies lunch, couches to nap on and toiletries—including tampons and pads—for anyone who walks in and identifies as homeless, says Layzer. She tries to be on a first-name basis with anyone who visits.

Jordan Harris, of Union United Methodist Church in the South End, is responsible for compiling the list of toiletries Friday Café may need. He has recruited his mother to help him with the list and to ensure he doesn’t miss anything female specific. He has posted the list on Amazon as a gift registry. It’s a sure-fire way Friday Café can tell potential donors what it needs. Friday Café has seen an exponential increase in the number of tampons and pads donations on the registry, says Layzer.

“People must have all read the same Huffington Post article,” says Layzer, referring to a January article that garnered a lot of national attention about homeless women.

In fact, Friday Café has received more feminine products than it can store and may even need to donate excess donations to Rosie’s Place or The Women’s Lunch Place at some point, Layzer says. Although the two organizations may not need it, they both say that they have more than enough feminine-hygiene products. The Women’s Lunch Place also has more than it can carry.

“It’s a good problem to have,” says Laura Hamill, resource coordinator at the drop-in center at The Women’s Lunch Place.

This hasn’t always been the case. It’s only this year that The Women’s Lunch Place has received an influx of tampon donations. Hamill is unsure as to why, but she’s thankful, nevertheless. However, she does note one concern that has been expressed by women who come into the drop-in center, and that relates to the type of tampon or pad.

When people donate, they aren’t entirely sure what people need, she says. As a result, The Women’s Lunch Place receives a lot of tampons and extra-thin pad donations. It’s only natural that people donate what they use, Hamill says. The Women’s Lunch Place staff are thankful for donations, but they would almost prefer monetary donations so that the staff can buy supplies based on visitors’ requests. Hamill says the women she’s encountered seem to prefer heavy-duty pads due to heavier period flow. Some women prefer pads to tampons because tampons can be a trauma trigger in cases of abuse or rape.

“The Women’s Lunch Place is trauma-informed care,” says Hamill, meaning the drop-in center assumes that any woman who walks in has gone through some sort of trauma in their life. Therefore, the center emphasizes a woman’s right to choice—which includes differentiating between feminine products.

Laura believes these products are a necessity for women. “Women [experiencing homelessness] already have to ask for a lot… We [The Womens Lunch Place] need to ask for them,” says Hamill.

The Women’s Lunch Place and the Friday Café represent two options in Boston and Cambridge, respectively, where women can get feminine hygiene products for free. However, advertising shelters and drop-in centers that supply free products can present issues for staff.

Kate Curran, a support member at The Women’s Lunch Place, says a woman walked in once and asked for feminine-hygiene products. Curran gave the woman three tampons and three pads, as per protocol. The woman insisted on receiving more, but, because the center needs to be consistent with toiletry gifts, Curran was unable to comply with her request. The woman, says Curran, was disheartened that The Women’s Lunch Place was unable to give her more feminine hygiene products. She told Curran that she didn’t want to have to go all the way to Cambridge—the only other facility she knew that supplied free hygiene products. Curran suggested that she go to the Old South Church, about two blocks away, and get free feminine hygiene products there. The woman was pleasantly surprised and left without a problem.

Neighborhood outreach is crucial, says Sandy Mariano of Rosie’s Place, a women’s shelter in Boston. Outreach provides the organization with most of its name recognition.

Mariano is responsible for evaluating services and strategic plans at Rosie’s Place, a position she’s held for 12 years. Outreach from a homeless shelter or day center is important so that people experiencing homelessness can become familiar with their services. Rosie’s Place has an outreach van that rides around Boston during the weekdays. Mariano knows “that not everyone comes to Rosie’s Place,” which is why it’s important for other similar organizations to practice outreach.

Brittany, who hangs out in the The Pit in Harvard Square, definitely doesn’t go to Rosie’s Place. Occasionally, she’ll go to On The Rise, a homeless women’s day-center in Cambridge—when she really needs to, she adds.

Ideally, Brittany wishes feminine-hygiene products were free and accessible anywhere. Brittany appreciates the $200 in food stamps she receives, but it doesn’t keep her clean or entirely healthy, she points out.

“You can’t buy tampons or pads with food stamps,” Brittany says. Food is a necessity, and so are pads and tampons, she adds.