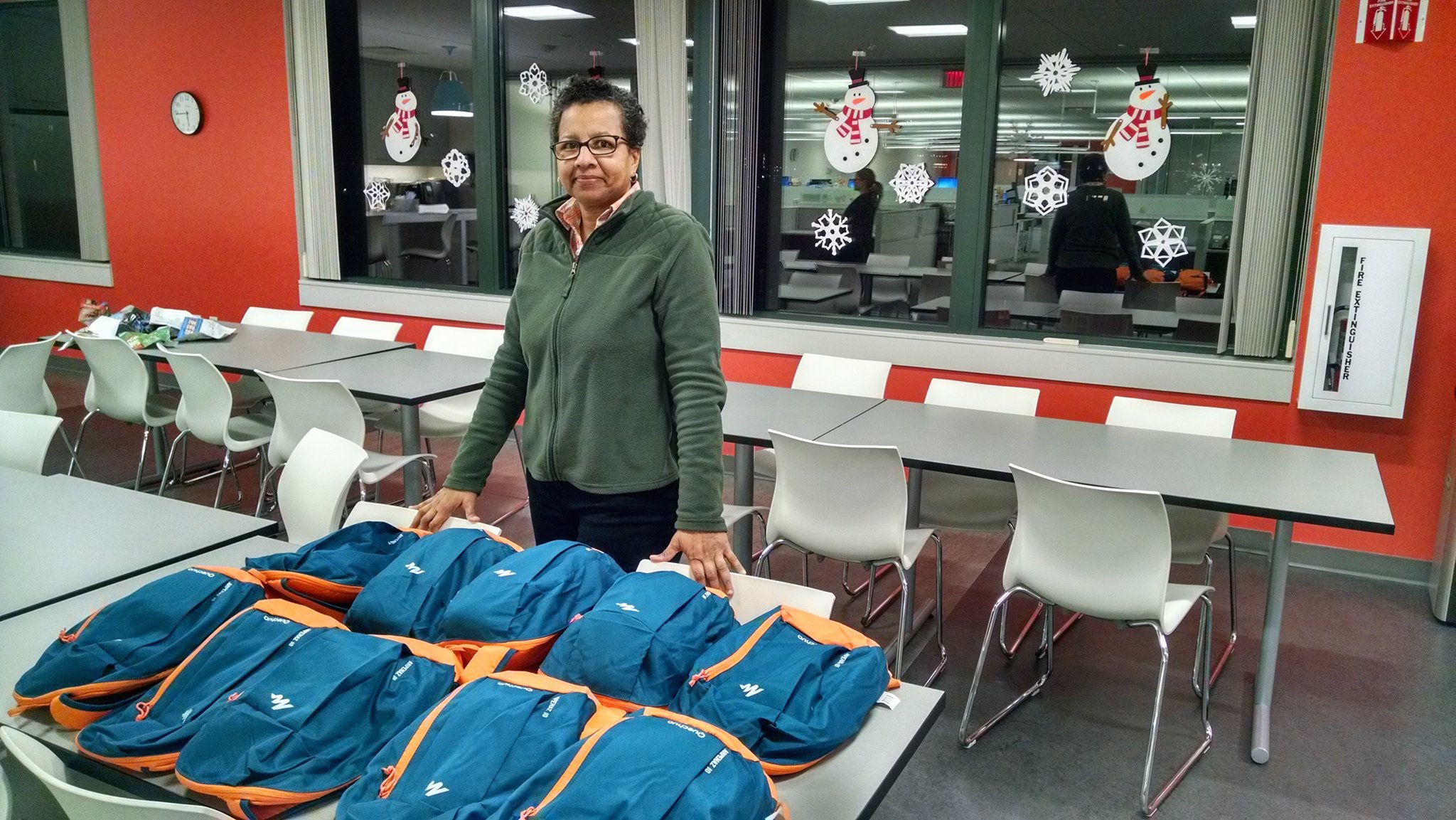 “I feel like I need to be there at some point to be able to alleviate their situation,” Isenia said.

Isenia and her two friends walked up and down the Back Bay area, scrounging for homeless people along Boylston Street and Newbury Street, between Hynes Convention Station and Copley Station. They passed out 10 backpacks.

The backpacks were filled with items that suit the physical, emotional, and spiritual necessities. It’s the work of the H.C.I Charitable Foundation, an effort to help people get back on their feet by simply giving. Isenia and her siblings started it two years ago to embrace their father’s legacy of helping people prosper. The items like the hats, scarfs, socks are the physical needs; and Christian rosary beads and prayer cards are for the spiritual needs.

“It’s very important to give people hope. Everybody deserves hope,” said Ignadali Nossek Isenia, who is Isenia’s sister. “They may not be the same belief at all, but everyone has a spiritual side, whether they know it or not, that needs to be nurtured.” They are now pursuing a nonprofit status for their organization. In the meantime, they continue to collect donated items to give to those in need.

Nossek wanted to help people in a way that represents her father and her Christian faith. The foundation, H.C.I. Charitable Foundation, Inc. is named after their father, Hermegildo Cesar Isenia, who passed away on  Feb. 17, 2013.

Isenia and Nossek grew up in the island country of Curacao. They saw their father teach families how to budget so they could stretch money and save. He mentored kids, taught them how to play soccer, and took them to matches. Aside from being a hard worker, he played soccer as a hobby every weekend. “Dad was a little bit of a celebrity because he was a very good soccer player, but he’d always say ‘I’m no better than everyone else,’ very humble,” Nossek said. He grew up kicking a ball of old socks, because he could not afford a soccer ball. People described this thin 6 ft tall man as simple, quiet, and humble.

When he was a kid, he’d buy Chiclets gum at a bodega store and put it on credit. There was no receipt for it, and he never kept track of it. Overtime as he paid off his dues, he realized the store owner overcharged him for the gum. He learned an important lesson; take responsibility for his own money, and live within his own means so there is no need for living on credit. Thus, he took night classes to become an accountant while working full time at his dad’s shoe shop.

“He became the best accountant in the oil refinery,” Nossek said about her father’s career. “My father loved numbers.” People nicknamed him a walking calculator.

He worked five jobs when they were kids so they could go to college. He used to tell them “once you have an education, the sky’s the limit.” Nossek said. He’d go to Miami, taking 2 ½ hour flights, to buy clothes and would later sell them back at his hometown in Curacao. He was known for selling Kenepa fruits, since he had a Kenepa fruit tree in his backyard. Isenia remembers a day when she told her father that 10 people at her workplace wanted to buy some Kenepa fruits. Her dad willingly climbed up the trees in order to pick the fruits. Every Saturday, he picked the trees, and continued to pick as needed throughout the week.

All of his kids carried out their father’s value of education by earning their bachelors and masters studies in the U.S. Isenia and Nossek continued working in U.S. after obtaining their masters. Isenia worked in banking as an assistance vice president of loan operations for 15 years,  and Nossek worked as regional rehab director in Arizona for 20 years. But in November 2009, Nossek left work and came back to Curacao to take care of their sick father when he was diagnosed with Alzheimers.  “It was my way of giving my father a hand when he needed it,” Nossek said.

Isenia left her job and came back the following January in 2010. “It was great to be there with my dad, it was challenging at times, it was sad at times, because my father was always a very strong man,” Isenia said. She ran a small business consulting firm in Curacao during her stay.

After his death, they looked to continue his legacy of giving. They moved back to the U.S and settled in the Boston area to start the foundation they created in honor of him. “Because of his selflessness we got opportunities that he didn’t get, when he was our age,” Isenia said.“We wanted to make sure that we never forget how much he gave up so that we could succeed. And we did.”

In early 2015, with their own money, Isenia and Nossek hired an attorney and an accountant to help them get their 501(c)(3), or a nonprofit status, so they can start fundraising and legally accept money donations for their cause.  They hope to be an official nonprofit by February of 2017. “My father was the closest thing to God, it’s like looking at my father I can understand the love of God.  With the foundation we’re going to keep his belief alive,” Nossek said.

Isenia acts as the director of finance, Nossek acts as the president of the foundation, and their sister Araceli Isenia acts as the operations and marketing director. In December of 2015, they spent $100 on four boxes and care supplies, starting it as a small project. They gave those boxes to four homeless people who Isenia regularly passes by on her way to work on Bolyston Street in Back Bay area. For this year’s project, they spent $100 on 10 backpacks and the care items were donated. They continue to donate items to shelter homes between projects.

In addition to helping the homeless, they hope to expand and add complementary services to other nonprofits. For example, if a shelter needed more beds, they would then provide beds. “I don’t believe we have to reinvent the wheel,” Nossek said. They also plan to work with social workers, community leaders, churches, and companies to target people with immediate needs like money for heating bills or gas for their car.

The sisters hope to expand their foundation after focusing on providing local needs. “We want to expand, national and eventually international. That’s our big dream goal, our long term goal,” Nossek said.

“Everyone wants a chance in this world, everybody.”