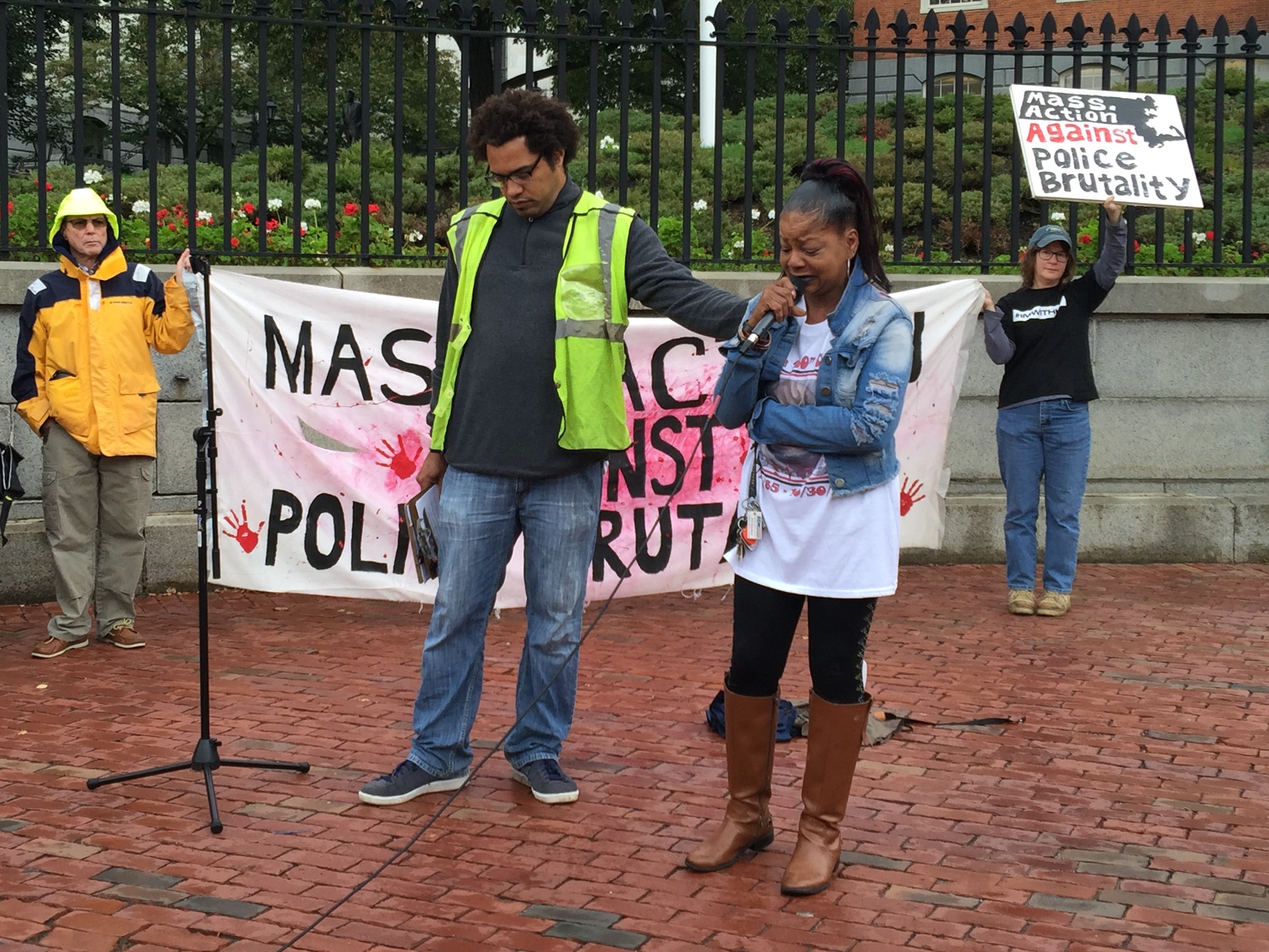 On Saturday, Oct. 29, protesters knelt in front of the State House calling on State Attorney Maura Healy to reopen the cases of police brutality in Massachusetts.

Satter led the chanting of about 50 rally attendees. “Take a knee for police brutality,” Satter chanted with the crowd.

The silent kneeling gesture was started by former San Francisco 49ers quarterback Colin Kaepernick, who knelt during the national anthems of the National Football League games last year as a protest against social injustice, especially police brutality and racism. “It’s encouraging to see people show up and stand in solidarity, because, really, all of our rights are under attack,” Satter said.

The Saturday afternoon protest took place in lieu of the one-year anniversary of the deadly police shooting of Terrence Coleman, 31, in October 2016 in the South End.

Coleman attended the protest, spoke on behalf of her deceased son and shared her story.

Before leading the chant, Satter spoke about others like Coleman, including Usaamah Rahim, Burrell Ramsey-White, Ross Batista, Denis Reynoso and Eurie Stamps.

Satter spoke through the microphone over loud passing cars.

“So when we take a knee here I really want us to take a knee to pay homage to the people who lost their lives to police violence, and that’s really what Colin Kaepernick was doing,” Satter said. “He was acknowledging that these people’s stories were being swept under the rug and that we couldn’t stand by and allow that to continue.”

“So the goal is oppression, and we stand against that goal,” said a woman dressed in a dark-red cloak who didn’t give her name. She attended the protest as a representative of the political action group, Handmaid Coalition. “The administration is waging a war against the rights of all kinds of minority—except, in fact, we make up the majority, which is why they are pressing us so hard,” she said. “They are trying to take away our power through disenfranchisement by inhibiting people’s rights to vote, by prosecuting undocumented immigrants, by signing warrants against people who have done nothing wrong, by ignoring the murders of black people, by forbidding immigrants from having abortions, by removing a woman’s rights to contraception.”

“I’m here because I’m very disturbed by the lack of accountability of the police, who should be public servants, who should be peace officers and yet seem to be able to act with impunity toward certain citizens of this country,” she said.

“I’m here because I think racist police brutality is a huge problem. And it is part of the system of white supremacy that our country is based on, and we have to attack it head on to have equity and justice for everyone,” he said.

For Andre Christmas, 35, he was there because he wants his children, ages 7 and 2, to grow up in a safer world.

“You’re a police officer, you protect, not kill,” he said. “The bad cops gotta go.”