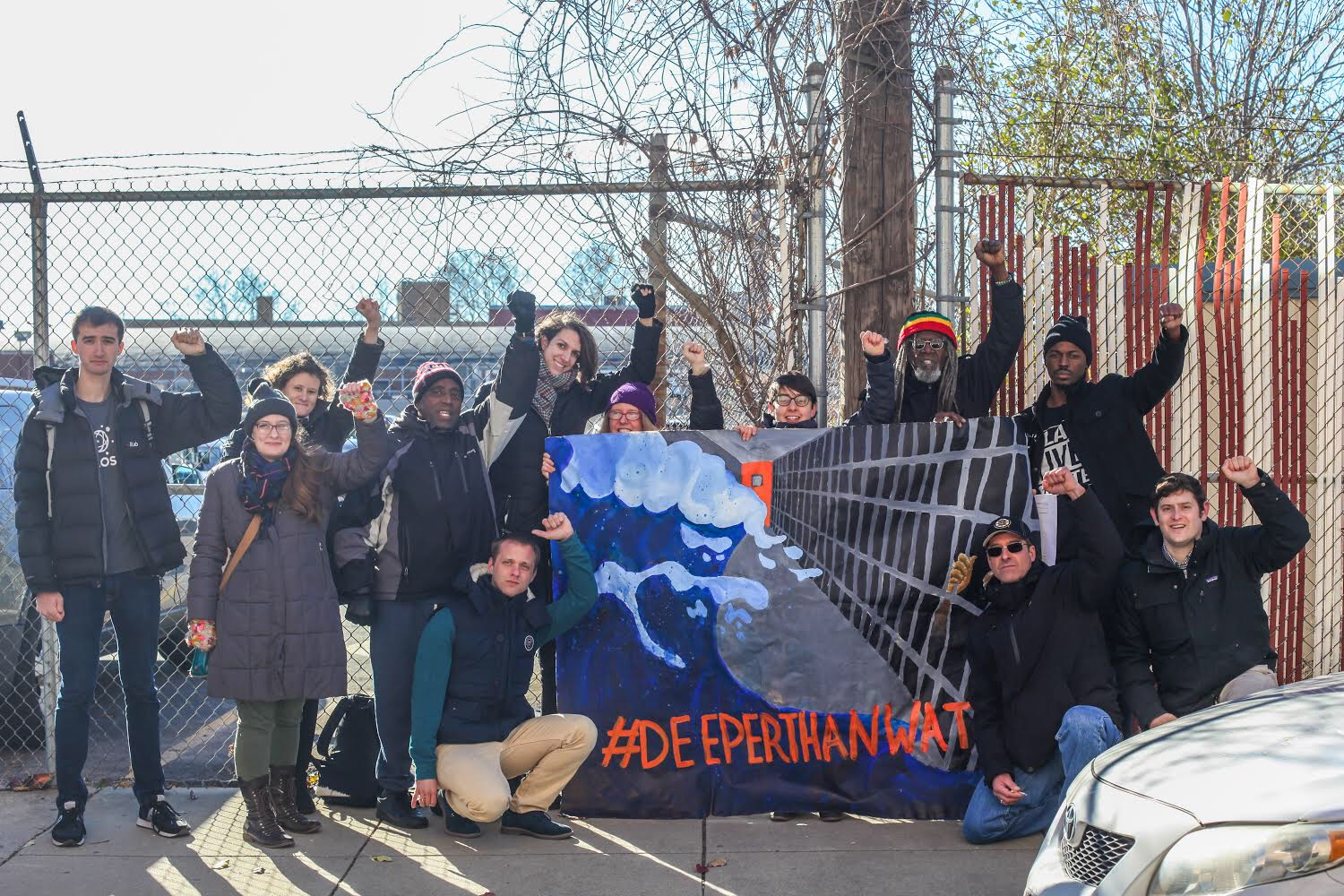 On the morning of Nov. 28, a small group of people gathered in front of the Suffolk County House of Correction at South Bay. With them, a banner depicted a tidal wave rushing toward a line of prison cells. The words “#DeeperThanWater”—the group’s name—occupied the bottom of the banner, painted in prison-uniform orange.

Deeper Than Water is a coalition made up of several groups involved in prison reform and abolition, including the Young Abolitionists, the Party for Socialism and Liberation, Black Lives Matter Boston and Black and Pink Boston. The coalition held a press conference outside the prison to discuss an issue both longstanding and relatively uncorrected in the Massachusetts Department of Corrections: the quality of the water inmates are using and consuming, most notably at the Massachusetts Correctional Institute of Norfolk. At MCI-Norfolk, the water has consistently maintained a brown, tea-like color and foul odor for decades, former and current prisoners attest. Its appearance, and whatever harmful effects may accompany it, has been at least partially attributed to unusually elevated levels of manganese found in the prison’s water supply.

“[The year 1989 is] when everybody could see the water turning … I can’t believe that we were forced to drink that, and the guys in there are still surviving that,” said Gregory Diachenko, who served 30 years at the prison and spent 20 of those years working as a plumber. “They’re bathing in it. They’re washing their clothes in it. ”

Douglas Rogers, a member of Black and Pink Boston who was also formerly incarcerated, recalls a similar experience. “We had to drink brown water for a number of years.”

According to the Massachusetts Department of Environmental Protection, two sanitary surveys were conducted at MCI-Norfolk between 2006 and 2009. In both instances, MassDEP noted “deficiencies associated with maintenance of the facility’s storage tanks.” In both instances, MCI-Norfolk failed to take any corrective action. In June 2011, a third survey was conducted; still no efforts had been made by the prison to fix the issue. On top of this, MassDEP also found problems “related to the application of chemicals associated with the water treatment plant.”

One month later, high amounts of iron and manganese in the drinking water at MCI-Norfolk caused a minor shutdown to the system, followed by a complete shutdown in September. Water pressure was lost, taps went dry and, for a day there, was no water.

MassDEP found that two of the three water sources at MCI-Norfolk had manganese levels exceeding 50 parts per billion (ppb). Manganese levels any higher than that cause water to become discolored and foul-tasting. It also causes water systems to malfunction. In response to these revelations, MassDEP fined the prison thousands of dollars and ordered them to correct the issues through the installation of a new system.

By the end of 2016, MCI-Norfolk had pleaded for and received three extensions to the installation deadline. All the while, prisoners had continued to use and consume from a compromised water supply. In December of that year, the Norfolk Inmate Council released a survey detailing health and water issues at the prison. The majority of prisoners who responded to the survey cited skin and intestinal problems. “The concern is that it seems as though the water issue has come to a standstill,” the council wrote in a later report. They fear that the elevated manganese levels and more are going ignored. “Testing shows dangerous contaminates ranging from bacteria to minerals … Medical conditions persist without proper diagnosis or treatment.”

In March 2017—after the fourth and most recent extension to MCI-Norfolk’s deadline, now set for May 2018—the Department of Corrections launched an investigation into the health and water survey, the Norfolk Inmate Council stated. In June 2017, the Boston Globe published an article detailing this manganese problem. According to the article, almost half of water samples taken at MCI-Norfolk since 2011 have shown levels of manganese exceeding 300 ppb. Levels that high have been shown to cause neurological damage if consumed regularly for long periods of time, MassDEP states. More than half the prisoners at MCI-Norfolk are serving life sentences.

While prisoners at MCI-Norfolk can purchase bottled water, the Boston Globe reported that each bottle costs about one-third of a prisoner’s daily wage. Those who are placed in solitary confinement—as Douglas Rogers was for 3.5 years—do not even have the choice to purchase anything.

According to the Norfolk Inmate Council, the Department of Corrections Tactical Team placed the prison on lockdown for the five days immediately following the release of the Boston Globe’s article, from June 19 through June 23. It’s unclear whether or not this was in direct response to the article, though the council believes that to be the case. On July 18, DOC Water Supervisor Howard Asnes met with the council to answer questions regarding the water issues. The council said Asnes “stated the water was at safe levels for the past year … that the current manganese levels are at [300 to 360 ppb].” Not only are these unsafe levels for consumption, but the statement also contradicted the data the Boston Globe compiled in its article.

According to the Norfolk Inmate Council, Asnes also stated that towns surrounding the prison have similarly high manganese levels. Studying the Consumer Confidence Reports of these towns, however, shows that they all have average levels well below the numbers coming out of MCI-Norfolk.

In response to these conditions and conflicts, the Deeper Than Water coalition demanded in an open letter to DOC Commissioner Thomas Turco that each Massachusetts prisoner—especially those at MCI-Norfolk—be provided with six bottles of free water per day until the issues are fixed. If clean and safe water cannot be provided, the coalition said, prisoners should be released or moved to safer prisons.

As the press conference went on, prisoners at South Bay began knocking on the windows. Deeper Than Water, taking it as a sign of solidarity, responded to them with raised fists and chants of  “we see you.” This prompted a prison officer to approach the coalition again, urging the press conference’s closure. Another nearby officer made a passing remark, showcasing the stark difference in perspective the two groups had in how the prisoners feel about the ongoing situation.

“They [the prisoners] are laughing at you. That’s what they’re doing.”

Wayland Coleman, currently incarcerated at MCI-Norfolk, isn’t laughing. A letter written by Coleman was read out loud at the press conference, addressing what he feels is more than a breach of water security. He believes this ongoing issue is a microcosm of the prison system as a whole, a point of view shared by those in the coalition. Other demands Deeper Than Water have made to the DOC include ending solitary confinement, ending life without parole and restoring voting rights to all prisoners.

“[Deeper Than Water] discovered that the issues of the incarcerated were much deeper than just the water issues at MCI-Norfolk,” Coleman wrote in the letter. “The administrator and staff treatment of the incarcerated as less than is a cornerstone in the system of punishment, often resulting in the deprivation of basic human and civil rights.”