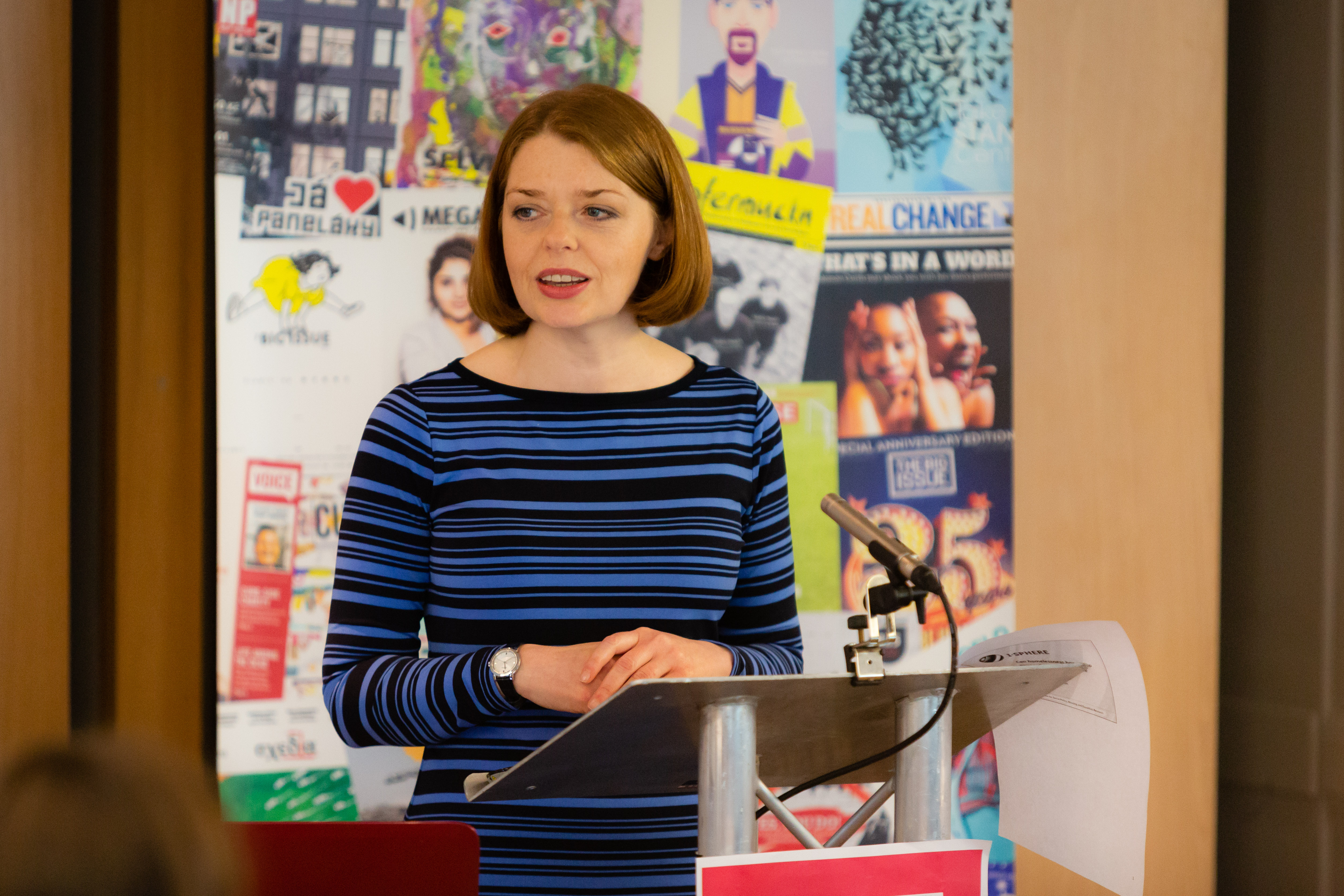 It’s a well-worn trope: we are all “two pay cheques away from becoming homeless”. The evidence to back up such claims is thin, says Suzanne Fitzpatrick, the keynote speaker on day three of the 2018 INSP Global Street Paper Summit, and professor of housing and social policy at the Institute for Social Policy, Housing and Equalities Research (I-SPHERE) at Heriot-Watt University in Edinburgh. And yet, we hear it all the time.

On the final day of the 2018 INSP Global Street Paper Summit, Suzanne Fitzpatrick, professor of housing and social policy at the Institute for Social Policy, Housing and Equalities Research (I-SPHERE) at Heriot-Watt University in Edinburgh, spoke to delegates about her research showing that the statement “homelessness can happen to anyone” is not quite as true as many make it out to be.

For an hour, Fitzpatrick spoke about, and answered questions on, her research refuting such claims, showing INSP 2018 delegates that, in fact, there are identifiable factors that have a profound effect on an individual’s likelihood of slipping into homelessness.

Summing up, she said: “We’re not talking about slight differences – these are fundamental differences that mean there is a slim chance for certain people to become homeless, while the odds are stacked against others.”

After Fitzpatrick’s presentation, INSP was inundated with requests to make the arguments behind the keynote available to the editorial teams of street papers. Here, Fitzpatrick lays out the points she made at the Summit in a digestible form for republication through the INSP News Service.

In a laudable attempt to avoid the ‘othering’ of those suffering acute forms of disadvantage, such as poverty or homelessness, it is sometimes argued by charities, and other progressive voices, that these misfortunes ‘can happen to anyone’. With respect to homelessness specifically, sympathetic politicians, academics and others often rehearse mantras such ‘homelessness results from many different causes’ and ‘homelessness is hugely complex’.

Well-intentioned as they are, such statements can create the impression that homelessness is a fairly random event; its causes largely unfathomable, and attempts at prediction doomed to failure. But is the risk of homelessness really so widely distributed across the population as to justify the common media refrain that we are ‘all only two (or one, or three) pay cheques away from homelessness’?  Or do such ‘inclusive’ narratives distract from deeper structural and other causes that may be identifiable, and possibly also preventable, should the political will be found?

A paper published in Housing Studies (‘Homelessness in the UK: who is most at risk?’), [written by Fitzpatrick and her colleague, Glen Bramley] demolishes the ‘two paycheques’ myth via an analysis of three major UK surveys that ask about past experience of homelessness: the ‘Scottish Household Survey’; the UK-wide ‘Poverty and Social Exclusion Survey’; and the British Cohort Study (focusing on the cohort born in 1970). It demonstrates that poverty – particularly childhood poverty – is by far the most powerful predictor of homelessness in young adulthood. Health and support needs, such as serious drug use, also contribute to homelessness risks, but their explanatory power is less than that of poverty. Social support networks are a key protective ‘buffer’, but again the link with homelessness is weaker than that with material poverty. Where you live also matters, with the odds of becoming homeless greatest in higher housing pressure areas, but these additional ‘area’ effects are considerably less important than individual and household-level variables.

The fact of the matter is that, for some systematically disadvantaged groups, the probability of homelessness is so very high that it comes close to constituting a ‘norm’. Conversely, for other sections of the population, the probability of falling into homelessness is slight in the extreme because they are cushioned by many protective factors. Two vignettes, drawn from either end of this risk spectrum, serve to illustrate the point:

The idea, then, that ‘we are all only two pay cheques away from homelessness’ is a seriously misleading statement. But some may say that the truth (or falsity) of such a statement is beside the point – it helps to get the public on board and aids fundraising (recent research by the Frameworks Institute for Crisis raises questions whether even this is true). However, myths like these become dangerous when they are repeated so often that those who ought to, and perhaps need to, know better start to believe them. There have been countless occasions showing senior figures from government and the homelessness sector rehearsing the ‘it could happen to any of us’ line. This has to be called out for the nonsense it is, so that we can move on to design the sort of effective, long-term preventative interventions in homelessness that recognise its predictable, yet far from inevitable, nature.

[It should be noted that this research is coming from a mainly UK perspective, and the figures outlined above is UK focused. However, as Fitzpatrick outlined at #INSP2018, similar arguments may be relevant in debates elsewhere in Europe, where a large contingent of INSP’s members are based. Fitzpatrick also noted that one of the reasons this UK based research holds so much weight is down to the uniquely rich set of data sources – such as the British Cohort Study mentioned above – to help explore the questions that she and Bramley were looking into, something peculiar to the UK. Fitzpatrick further noted that, when referring to some ethnic minorities being more likely to become homeless, this was borne out in the US in particular. Black Americans are at a huge, disproportionate risk of homelessness. In the UK, the black population is much smaller, but the magnitude of the heightened risk is much the same.]

On a slightly different note, the repetition of this falsehood seems to signal a profoundly depressing state of affairs – that we feel the need to endorse the morally dubious stance that something ‘bad’ like homelessness only matters if it could happen to you. Are we really ready to concede that social justice, or even simple compassion, no longer has any purchase in the public conscience? Moreover, it strikes me as a very odd corner for those of a progressive bent to box themselves into by being so willing to deny the existence of structural inequalities, which is exactly what, if you take a moment to think about it, the ‘two paycheques’ argument does.

So let’s leave it behind. Let’s be honest that homelessness probably won’t happen to you if you are middle class. But you should care about it anyway. Because it’s happening to an increasing number of your fellow citizens. And it’s miserable, unfair, and preventable in the world’s sixth biggest economy.

This is adapted from an article originally published on the London School of Economics Politics and Policy blog.

Courtesy of the Institute for Social Policy, Housing, Environment and Real Estate at Heriot-Watt University / INSP.ngo