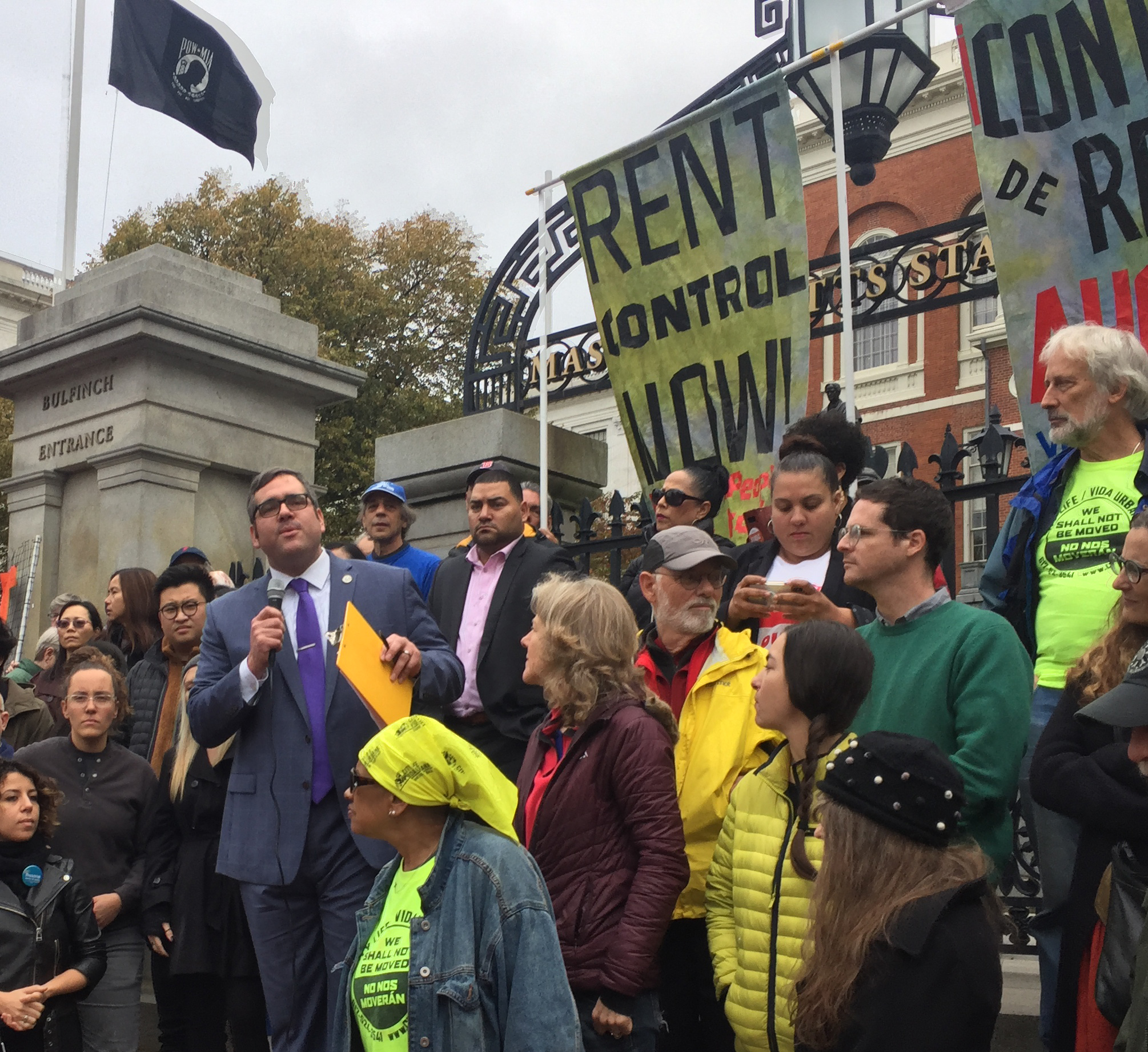 Dozens gathered outside the Massachusetts State House on Tuesday, Oct. 29 at a rally in support of legislation that would reinstate rent control in Massachusetts.

The state eliminated rent control after Massachusetts residents voted to do so in 1994 by a very slim margin, with 49 percent in favor of keeping it, and 51 percent voting to get rid of it.

Housing advocates held signs saying “No Greed!” and “Rent Control Now!” and were led in a call and response by groups sponsoring the rally, including City Life/Vida Urbana.

The rally endorsed legislation filed by State representatives Mike Connolly and Nika Elugardo that would bring rent control back to cities and towns across Massachusetts.

Connolly argues that the solution to the “emergency” of displacement, eviction, homelessness and the affordable housing shortage is a return to rent control in some form.

“What we are talking about is lifting the state-wide ban and making it possible for our municipal elected officials to bring renters and owners to the table to come up with solutions to stop displacement,” Connolly said.

Elugardo also called for a conversation about lifting the ban in order to ensure that the needs of people take precedence over profits, as the cost of renting a home gets higher and higher throughout cities and towns in the Commonwealth such as Boston and Cambridge.

“We have to have a way of assessing whether or not the legislation that we’re planning follows through on that commitment to putting people first,” Elugardo said, adding that the housing crisis has impacted all income brackets.

“This is the jump that we have to make, we have to make people understand that lifting the ban on rent control is not about limiting anyone, it’s about … how we include everyone in wealth and progress and success,” Elugardo said.

A union construction worker, who went by the name “T,” spoke at the rally and said she could barely afford to live in Boston, and she is not a low-wage worker.

Several women who are trying to survive on a fixed income spoke about being unable to afford a $700 rent increase that a new investor of their building imposed on all tenants. They are in housing court at the moment and are receiving support from City Life/Vida Urbana.

Boston City Council president Michelle Wu took to the mic and spoke more about the proliferation of new construction and development rules throughout the city and the Commonwealth, stating that “we are in a housing crisis during a luxury housing boom.”

Wu said that the ability of cities and towns to have the power to decide whether to utilize rent control as a tool to end displacement is what the discussion around rent control is all about.

Somerville Mayor Joseph Curtatone said he’s getting calls to his office and home now “everyday” related to high rents and the cost of living in his city.

He tied the lack of housing and displacement to less access for those who have less resources available to them.

Connolly said a hearing on House Bill 3924, An Act Enabling Local Options for Tenant Protections, would be happening some time in the future, although he couldn’t say when.