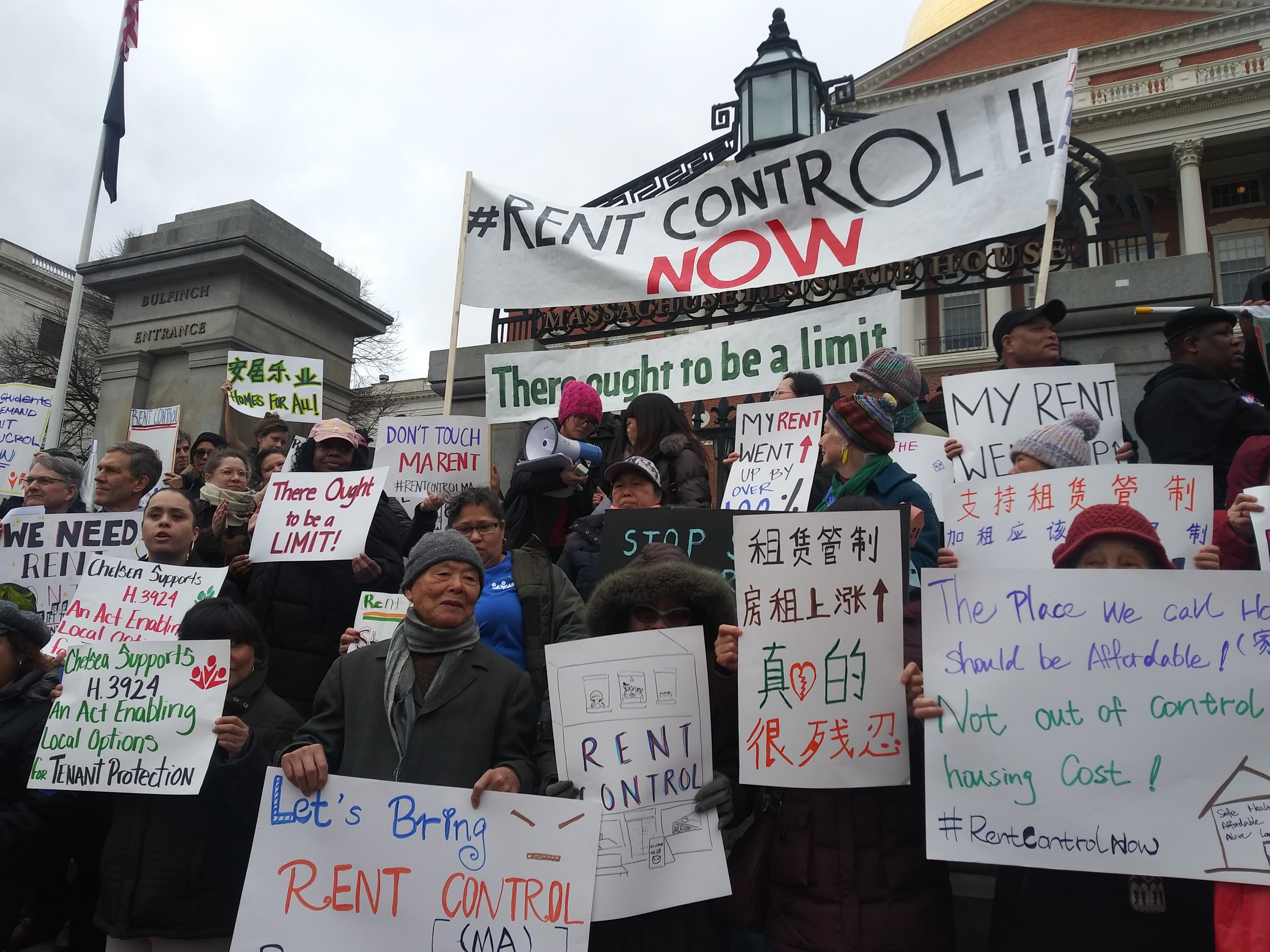 The Joint Committee on Housing held a hearing on Tuesday, Jan. 14, on a bill before the Massachusetts Legislature that would lift the ban on rent control in Massachusetts, allowing cities and towns to decide if it’s best for their respective communities.

The bill is being sponsored by Rep. Michael Connolly (D-Middlesex) and Nika Elugardo (D-Norfolk).

Rent control was banned in Massachusetts in 1994, but soaring rents, including rent hikes of several hundred dollars in a single year, have led many Massachusetts tenants to become fed up with the status quo and demand change.

Massachusetts resident Maria Torres testified that in a single year, her landlord raised her rent from $2,000 to $2,700. She became tearful at one point while relating the hardship this brought upon her family to the committee.

Ruby James Saucer, a Mattapan resident and member of City Life/Vida Urbana, an activist organization that works to preserve and expand the rights of poor and working class people in Massachusetts, testified before the committee about her experience an a renter.

According to Saucer, her landlord is trying to raise her rent by an additional $700, despite the fact that she’s living off of a fixed income. She also argued that the increase is especially ludicrous because, according to her, the building is infested with vermin.

“I’m struggling to stay in my home,” Saucer said. “My building was sold to…a landlord…and immediately when he bought the building he asked for a $700 increase. I don’t know him – I didn’t know him – until two months ago when I met him in court.”

Saucer went on to say that she’s got grandchildren and great grandchildren who she doesn’t feel particularly good about having at her home overnight because of the infestation, and as an older woman on a fixed income, she has no way to financially cope with the rent increase.

“I have a fixed income, I do not work. I cannot afford to pay $700 for a building that’s infested with mice. I leave home, I come home, I’ve got [mouse] poop in my bed. That’s totally ridiculous. No one should live under those conditions. It is horrible. I’m afraid to get in my bed. [Mice] are sleeping in my bed with me. Pull the covers back, you got [mouse] poop in the bed! Why should I be living in a place like that? Why would the state and city let people live in these conditions? He wants $700 – why should I pay him $700 more to live in a place that has mice on the bed…I don’t think it’s fair that I should pay him $700 more to sleep in a mouse infested place…no one should have to live in these conditions. No one.”

Executive Director of City Life/Vida Urbana, Lisa Owens, testified before the committee, stating that losing one’s home can be devastating, particularly for parents, noting that mothers “who experience eviction report higher rates of depression, parenting stress, and material hardship.” Owens went on to point out the power imbalance between tenants and landlords, some of which are companies as opposed to individual homeowners, who make large profits while renters struggle to survive.

“While apartment investment firms are free to displace families across the Commonwealth at will, municipalities are powerless to address the scale of this crisis using all of the tools at their disposal. [House bill 3924] ‘An Act Enabling Local Options for Tenant Protections,’ puts the power back in the hands of cities and towns in Massachusetts by giving municipalities the authority to craft strategies to address the affordability and displacement crisis in the ways that make the most sense locally.”

Owens also spoke up in favor of a bill that would impose a transfer fee upon certain real estate transactions in order to raise money for affordable housing.

“Transfer fees are a proven, efficient way to raise millions of dollars in revenue. This is a common sense solution and it is the right tool to use to fund the tenant protection policies being proposed today. Now is the time to pass the comprehensive housing package that will address the most fundamental of needs: Safe, stable, affordable, quality housing for all residents in the State of Massachusetts.”

The hearing room was packed full of people, as was another room that was opened in order to accommodate the overflow. At 1p.m., activists with City Life/Vida Urbana, and other groups and their supporters, gathered outside on the steps of the State House for a rally in support of rent control. People held up homemade signs, shared their stories, and sang songs as the hearing continued inside.

Spare Change News Co-Founder James Shearer was on hand to lend his support to the cause, and said that he believes Massachusetts might just be ready to bring rent control back. “I think it’s got a shot, but you know how the state legislature is: slow. So I think we’re gonna need to get in the streets and get it back on the ballot,” Shearer said, adding that in 1994, “there was all this fear about poor people, and the mainstream media exploited that,” but he believes things have changed since then, and Massachusetts voters are ready to bring rent control back.