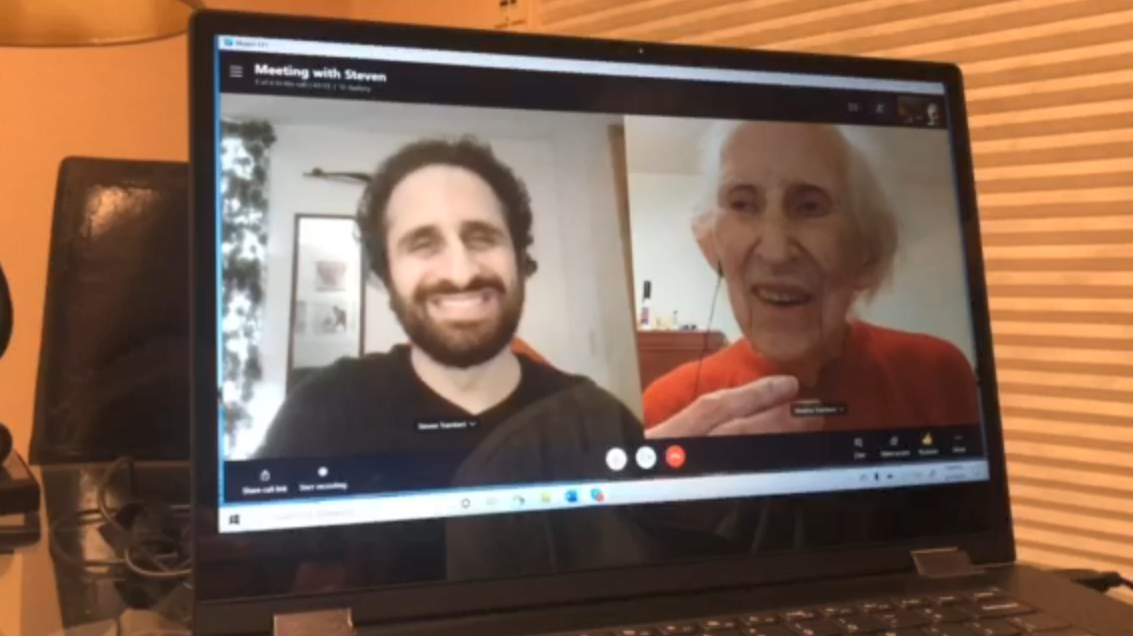 In the early days of pandemic-era social distancing, Steven Trambert realized his family had a serious problem. His 96-year-old grandmother had been in the hospital and, given the high risks of infection facing the elderly, she was suddenly off-limits. His family had no way of getting in to see her face-to-face or, due to her hearing, even speaking with her over the phone. Other families, he believed, were probably facing the same heartbreaking situation.

“The solution I came up with was TabletConnect,” said Trambert, a Central Square, Cambridge resident whose days are spent as a mechanical engineer at a local startup and whose recent vacation time has been spent developing the guide and working with users.

TabletConnect is a free resource that has now been used by hundreds of families around the world. Using his own experience as a jumping off point, Steven created the free guide, found at tabletconnect.org, to help others navigate the process of getting and setting up a tablet for loved ones who may have difficulty navigating technology.

The step-by-step TabletConnect process enables families to easily configure a smart tablet in such a way that the receiving loved one can begin getting video calls on the tablet right out of the box. It offers suggestions for tablets based on individuals’ particular cell phone carriers and provides resources for those who want to acquire low-cost tablets to use.

“I try to keep it so simple that you could mail it to them and they would be able to turn it on even if they have no level of technological understanding,” Trambert said. “They just need to plug it in and turn it on.”

That level of simplicity is exceptionally important for people who, for a variety of reasons, may not be able to access wi-fi, maneuver buttons or swiping, or manage all the necessary steps that are required. And it’s been a lifesaver for some of our nation’s elders, who were already among the most isolated individuals in our society.

“It was a complete gamechanger,” Lesley Williams, a TabletConnect user based in Seattle, told Spare Change News. “I think it’s the only thing that helped her survive the past few months.”

Her mother-in-law, who lived in senior housing, was one of the many, many people who found transitioning to COVID-19 quarantine conditions very difficult.

“She was just deconstructing. She was crying all the time. She missed everybody. She was scared about getting the virus,“ Williams said. “It got to where distancing from her was almost worse than risking her.”

After her daughter learned about TabletConnect on Reddit and the family went through the TabletConnect process, there was an incredible change in the whole family’s quality of life.

“Oh my goodness, it was so amazing,” said Williams. “My oldest son has an at-the-time five-month-old baby and he would read bedtime stories and have grandma sitting right there on the tablet. My husband would walk around the garden and show her what was going on in the garden. The other grandkids could talk to her and show her what they were playing with.”

Williams said that the whole process of setting up the tablet took less than 30 minutes, and Steven was easy to reach when the simplicity of the process caused her to second guess whether she was doing things properly. (She was.)

Steve Abbot, another happy TabletConnect user from Northern Minnesota, also praised the ease of the TabletConnect guide, which he learned about through Reddit’s LifeProTips subreddit.

“It was super simple and something that I’d been looking for, actually, for quite a few weeks. I’d been looking all over the internet for some type of advice or help to get a tablet started, and it was all sitting there, ready to go, through TabletConnect.org,” Abbot said.

His grandparents, who live two hours from him, had never owned a smart device before. When Abbot encountered some SIM card-related problems, he was able to quickly get in touch with Trambert, who helped him troubleshoot and has since added a section to the guide for others who might encounter such a glitch.

“He has been Johnny-on-the-Spot,” Abbot said of Trambert. “The support was all free, and what’s great about it is he’s taken his time to do ‘right’ in this trying time throughout the world. It’s nice to meet someone through the Internet like that, and it’s been so, so helpful.”

“If someone’s questioning doing this, you know, don’t hesitate to do it, because right now everyone needs connection.”