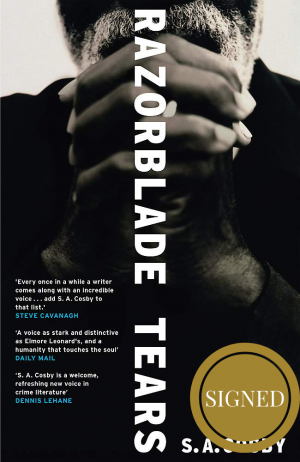 This amazing story is about a Black ex-con father, a white racist ex-con father and two families wracked by the pain of two sons, one white and one Black, who get married and have a surrogate mother gift them with a beautiful female child.

Ike Randolph was set free from prison fifteen years ago and never was able to reconcile with the fact that his son, Isiah, was gay.  Ike was able to reform his life and start a landscaping business that grew, because of his dedication and hard work but his life was torn by prejudice against his son because he could not accept Isiah’s life.

Isiah married a white man his age named Derek whose father was Buddy Lee, a white racist ex-con who could not bring himself to accept Derek’s life and retreated into hard-drinking and sorrow.  Derek was ashamed of his father’s criminal past.

All of a sudden, the two men are brought together by the brutal slaying of Derek and Isiah.  It is an unlikely alliance and it is fraught with friction, yet both men want to avenge their son’s murder that forced them to have a closed casket funeral for both of them.  They were buried next to each other under a blue Virginia sky with both fathers and their families in attendance.

Derek Jenkins and Isiah Randolph were killed because of their relationship with a woman known as Tangerine who had a lover that was married and didn’t want the relationship to be outed by the LGBTQ newspaper called “The Rainbow Review” that Isiah wrote for.

This is S. A. Cosby’s second book.  His first book, called “Blacktop Wasteland” was a Guardian Crime and thriller book of the year in 2020.  He is a Black writer from south-eastern Virginia and lives in Gloucester, VA.

This book takes a giant leap from his first book by combining racism, homophobia, corrupt politicians, and outlaw bikers in a tense story of multiple confrontations and a gradual struggling acceptance of various lifestyles.

Michael Connelly, a writer and reviewer, says of this book, “Superb . . . cuts right to the heart of the most important questions of our times.”

Ian Rankin, another writer and reviewer says, “The very definition of a white-knuckle ride . . .  don’t know when I last read such a bruising book about bruised people.”

Ike Randolph is married to a talented educated woman who works as a nurse in a local hospital and they have taken on the blessing of Derek’s and Isiah’s 3 year old daughter named Arianna, who is of mixed race by choice of her deceased parents.

Due to the nature of the crime and the controversy of the slaughtered young men, the investigation of the murders is not a priority with the local police.  This forces an unlikely alliance of the Black ex-con father and the white ex-con dad who want resolution for the terrible loss of their sons despite the fact that, while they were alive, neither man could accept the way they lived.

Both men, coming from a hardcore life, really know how to take care of themselves when it comes to violence.  They’ve reached the point where they hate that part of their nature but they know they’ll have to use it to get closure for the vicious murders of their sons.

It’s ironic that it takes a terrifying act to bring them to accept who their sons were.  Buddy Lee and Ike Randolph make a powerful team to hunt the killers of their sons.

Yet even they have no idea how deep this will take them into a world they had vowed to leave behind.  This is one of the most powerful, gut-wrenching books I have ever read and I highly recommend it.  “Razorblade Tears” is a book that is timely and necessary.  The writer, S. A. Cosby, has reached deeply into his gut and pulled out a bloody miracle.  You may see yourself on the pages of “Razorblade Tears.”  This book should be required reading in high school.  Really.